Trading and Investment during COVID19 The Hard Data

The coronavirus has caused financial phenomena that are either unprecedented or have not been seen in decades. In this post, we reveal some of eToro’s inside information, as we extract and discuss the unique data points that show changes in trading and investment behaviour.

As many governments imposed several forms of lockdown in their respective countries, billions around the world were impacted and many were forced to stay at home. Moreover, the growing financial effects of the virus have generated increased interest in global markets for many people worldwide. This was very apparent on eToro, as we saw the largest increase in activity since the 2017-18 crypto boom. 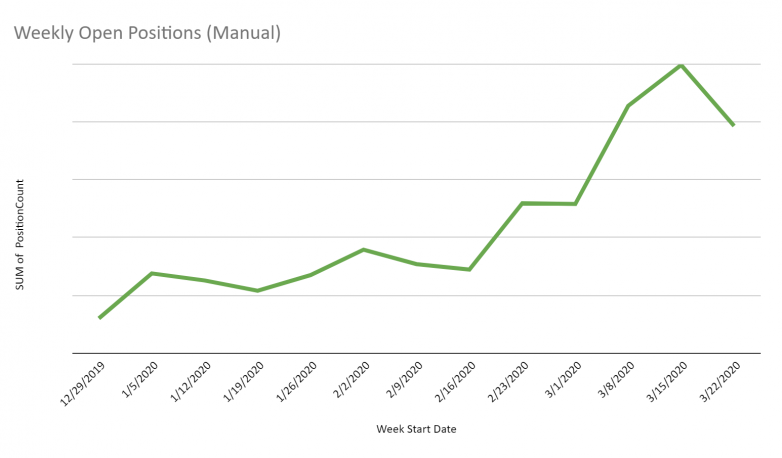 As you can see above, new positions opened on eToro grew five-fold since news of the virus first started.

What are eToro Users Trading?

The eToro community is very diverse, spanning millions of users from more than 140 countries around the world. While some assets and asset classes are more popular than others, there is still great diversity. Now, the global pandemic has shifted the focus towards assets that were less popular in the past. 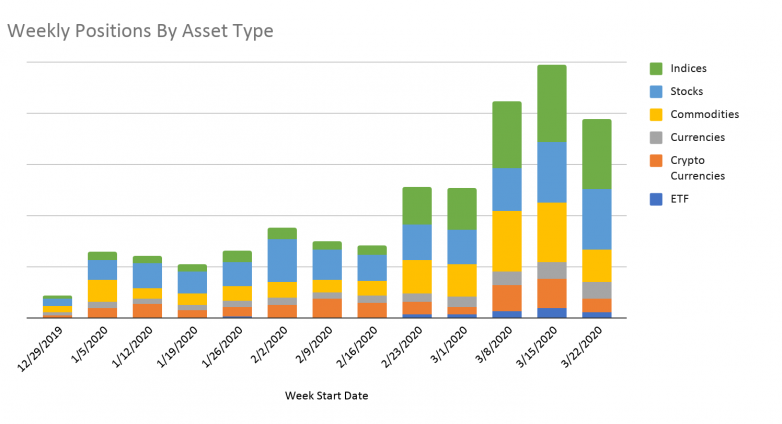 In a trend shift that was never seen before on eToro, indices have become the most popular asset class, accounting for more than a third of all open positions. Coming closely after them are stocks, which make up more than 30%, and commodities, which kept their proportionate share at around 16%. Another major change was in crypto, which went from being a leading category to accounting for just 7% of total trades.

While commodities still held the top spots in March, you can clearly see in the graph above that indices have become the new go-to for traders and investors, pushing cryptos down to the bottom of the list.

Do Traders Believe in a Market Recovery?

One possible indicator of overall faith in markets is the relative use of short (SELL) positions, which rise in value when a certain asset goes down. At time of writing, it seems that the majority of positions opened on eToro are still long (BUY). 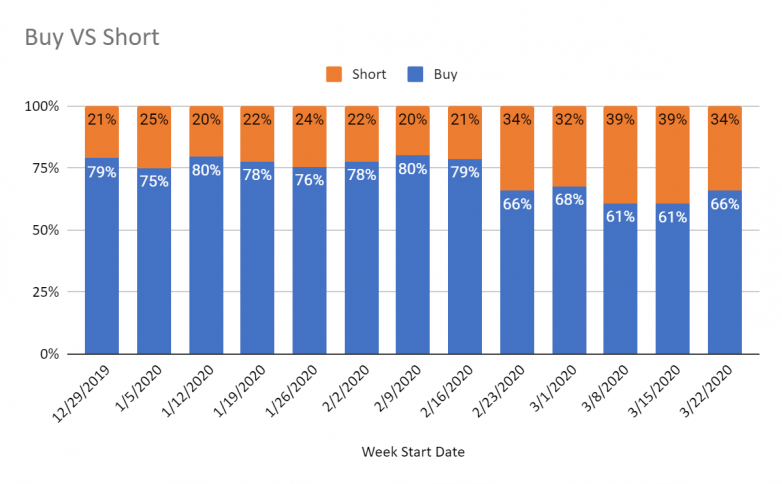 However, as the data suggests, short positions have become much more common, almost doubling in their relative number to long orders between January and mid-March. Moreover, since many investors would not even consider using short orders, due to their higher risk potential or due to a long-only strategy, this incline indicates that a growing number of people have less faith in the markets today.

However, a silver lining could be seen in the form of a decline in the percentage of short positions over the last two weeks of March, which coincides with the $2.2 trillion stimulus package announced in the US, which boosted Wall Street and returned faith to some investors.

Some assets became extremely volatile over these past few months. Gold, oil and indices went from sometimes only showing decimal daily movements to double-digit price swings. eToro traders are very attuned to such movements, and often react by opening short or long positions. 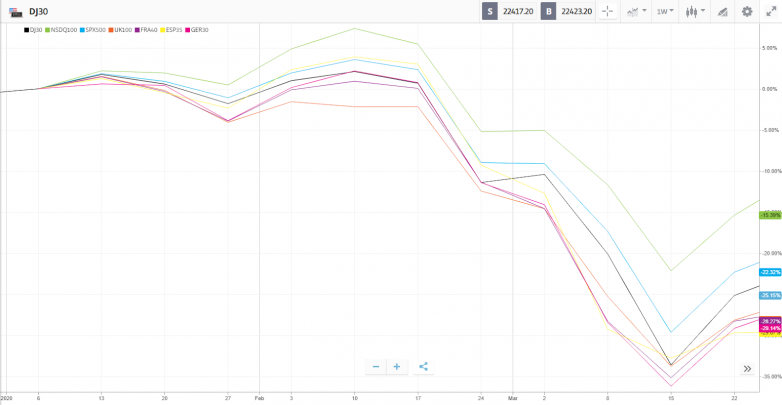 Indices presented perhaps the most profound change. Once considered a long-term investment option, they became a short seller’s favourite. Short orders on US and European indices became the majority. However, this was later offset by some exchanges disabling short orders altogether and some indices recovering due to government stimulus. 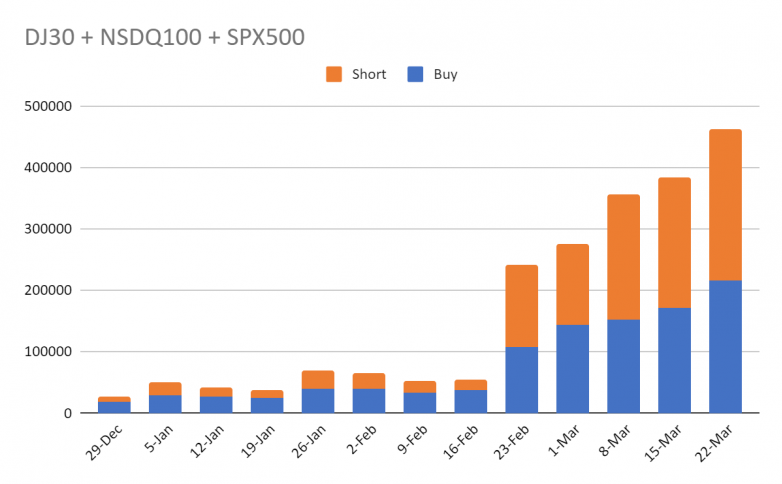 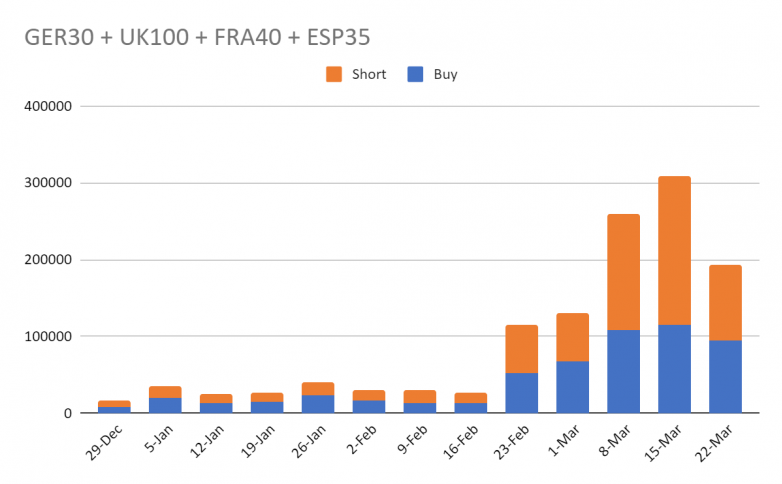 As the data clearly shows, the SELL position became so popular among traders in March, that it actually surpassed BUY orders at certain times.

Gold was also heavily impacted by the global pandemic. Traditionally a safe-haven asset to which traders and investors turn in such times, the precious metal initially went down alongside other markets. However, gold has since recovered, and with it, the number of short orders diminished. 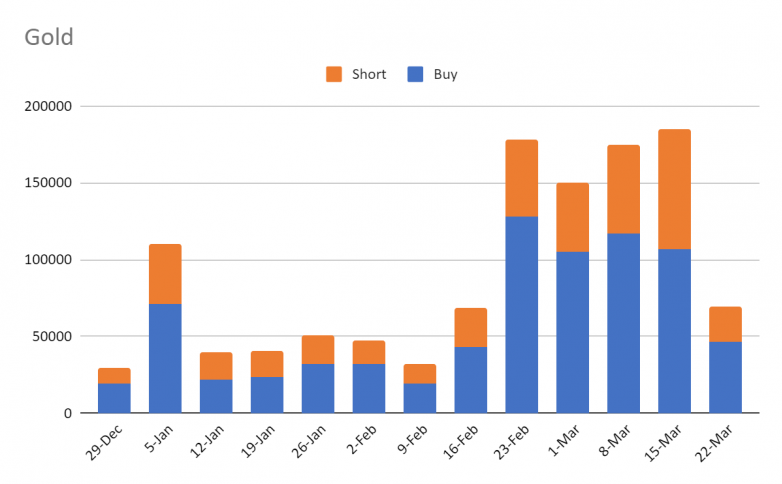 Oil prices have suffered significantly during the crisis. The forced lockdown in many countries brought the world to a standstill, greatly reducing the need for oil during these times, which is one of the reasons that black gold hit an 18-year low in late March. 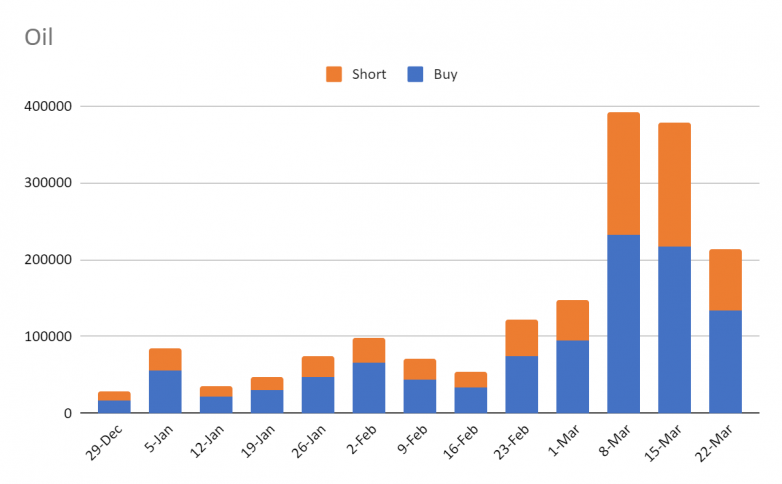 The Industries that were most Impacted

While markets were impacted across the board, some sectors were more heavily affected than others.

The number one financial loser is, no doubt, the travel sector, that spans the aerospace, lodging and airline industries, which were all hit hard by the pandemic. 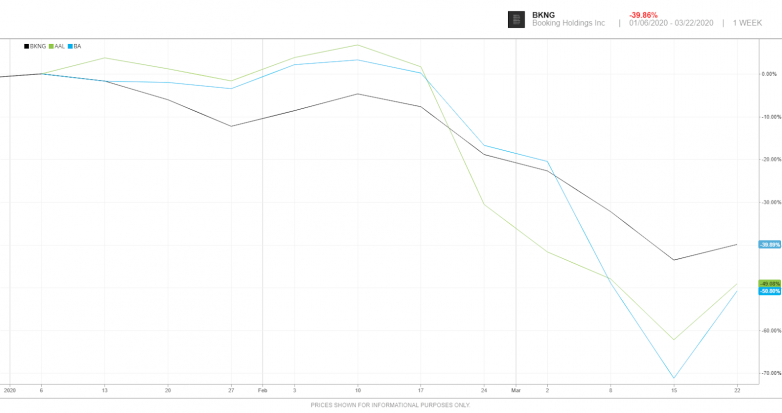 The graph above shows clearly how companies in each industry, in this case, Boeing, American Airlines and Booking.com, tumbled during the coronavirus crisis. Despite a small recovery seen over the past two weeks, these industries still have a long way to go. 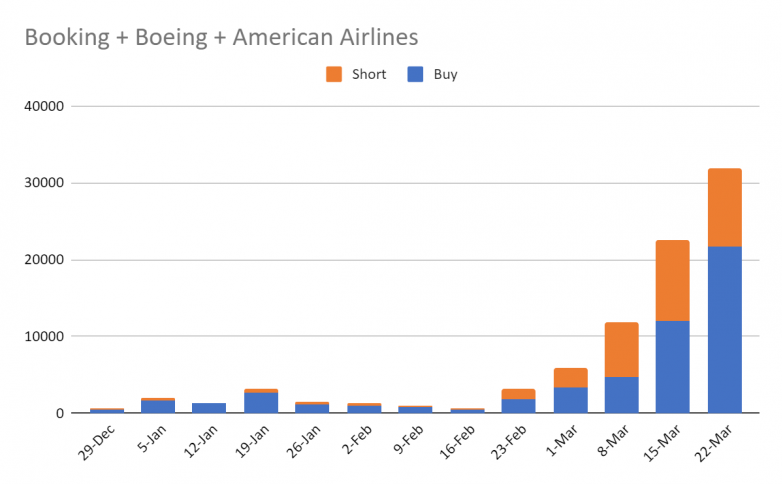 In the short-selling category, the relative number of SELL positions also increased.

The “Stay at Home” Sector

Nationwide lockdowns, social distancing and self-quarantine led to some industries being in higher demand than others. These include home delivery and various forms of home entertainment.

While not entirely protected from the global downtrend, the data suggests that these companies have been more resilient, due to their ability to fulfil crucial needs of home stricken individuals, such as streaming TV (Netflix), delivery of goods (Amazon) and hot meals (Domino’s).

There is no doubt that the eyes of the world are directed at pharma companies, hoping that they will be able to develop a treatment or vaccine for coronavirus. Moreover, the need for medicine is rigid and perhaps even on the rise during such times.

However, as the data shows, these companies were not spared and were also impacted by the downtrend. While at first it was Gilead that showed a recovery in the hope that it was developing a coronavirus vaccine, it was later Johnson & Johnson, which displayed a similar uptick after announcing that it was planning to start human trials of its vaccine in September. 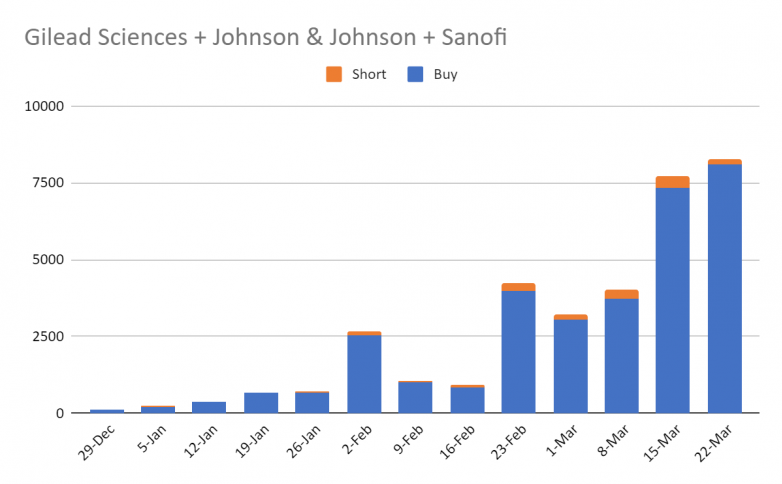 However, despite being impacted by downtrends, investor sentiment has remained positive, as virtually all those who opened positions on these big pharma companies opted to buy, rather than sell.

Where is the Market Heading?

The short answer is: nobody knows. Some analysts believe that the market has already bottomed and it can only go up from here, while others argue that the end is still far away. Some investors see this as an opportunity to buy stocks at a large discount, while others believe they should “sit” on their money until volatility subsides and the crisis is over.

In any case, here at eToro we will continue to collect the data and offer updates from time to time.