The S&P 500 dipped on Thursday, breaking its winning streak after falling 0.9%, but the index still recorded its best month since January 1987 after jumping 12.7% in April overall.

The index has been driven higher by a huge rebound from March lows, when the coronavirus pandemic hit US shores, with the support from governments and central banks bolstering confidence and sparking the double-digit run higher. 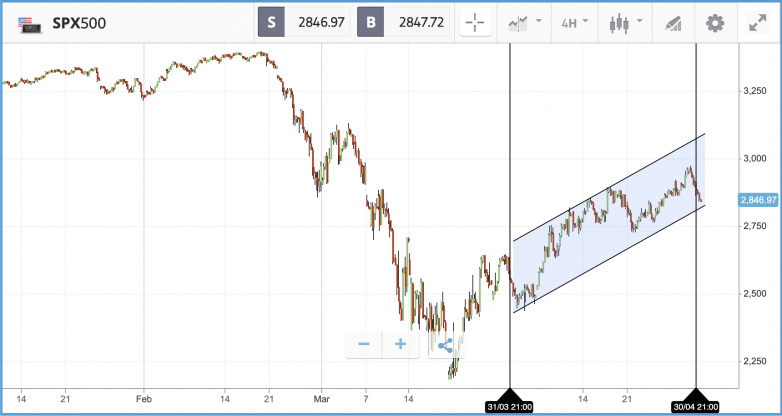 Much of the gains have come from the tech giants at the forefront of the coronavirus world, still able to operate and deliver services to millions of customers. Last night, Amazon reported its Q1 2020 earnings after the market closed on Thursday, beating revenue expectations but missing out on profits.

The big news, however, was that the firm plans to spend all of its profits from the second quarter of 2020, an estimated $4bn, on its response to the coronavirus pandemic — including testing workers and reinforcing its delivery capabilities to handle a surge in online order volume. Amazon has seen a major uptick in grocery sales, and CFO Brian Olsavsky said that, where shipping delays have occurred, it has been due to inventory issues rather than delivery capacity. The firm has filled the 175,000 positions it opened up in March and April to handle demand and has suspended more than 10,000 sellers from its platform for violating price gouging policies. Amazon stock fell more than 4% in late trading but is still at near record highs of $2,474 per share.

Apple also reported earnings on Thursday, posting a slight increase in sales during the first three months of 2020, despite factory shutdowns and store closures. Profits fell slightly year-over-year, but the firm said it has seen an uptick in recent weeks after introducing a new iPhone model. In the first three months of the year, iPhone sales fell 6.7% but the firm enjoyed a 17% jump in services revenue to $13.3bn and a 22.5% jump in wearables revenue to $6.3bn. Apple stock sank more than 2% in late trading.

Most European markets are closed this morning for Labour Day, with the exception of the UK which has opened down 2.5%, being dragged down partly by another 5% sell off in Royal Dutch Shell following their dividend cut yesterday. The price doesn’t seem to have been given a reprieve despite today marking the start of the production cuts agreed by Opec .

Having broken their winning streak on Thursday, stock futures also fell after hours, following Amazon and Apple’s earnings reports. In corporate news, Boeing completed a $25bn bond offering on Thursday in order to weather the coronavirus and 737 Max storms, which are draining its cash reserves. The bond issue means that the firm doesn’t need to seek funding from the US government. Boeing offered seven maturities ranging from three to 40 years, paying 5.15% for 10-year debt.

The Dow Jones Industrial Average fell furthest out of the three major stock indices, closing the day out 1.2% lower. American Express and Walgreens Boots were the biggest losers of the day, with Goldman Sachs, Walt Disney and Caterpillar all falling more than 3% too. In the S&P 500, the materials and financials sectors fell furthest, with consumer discretionary and communication services stocks the only sectors to post a positive day, the latter driven by a 3.7% gain in the internet and direct marketing retail subsector.

The FTSE 100 tumbled yesterday, closing the day 3.5% down and wiping out a chunk of the gains it made in the earlier part of the week. Royal Dutch Shell was one of the main stocks dragging the index lower, sinking 11.4% after cutting its dividend for the first time since World War II; rival BP also fell more than 6%. Shell wasn’t the only company making changes to its dividend — Sainsbury’s deferred a decision on whether to pay its dividend until later in the year, and canceled bonuses for management staff. Higher grocery sales are helping the firm, but it is having to spend on protecting staff, and is losing out on sales of clothing, fuel and other non-food goods.

Berkshire Hathaway: This weekend Warren Buffett’s Berkshire Hathaway will host its 2020 annual shareholders meeting, streaming the event live and fielding shareholder questions via three journalists, with CNBC’s Becky Quick deciding which questions deserve asking. The event is highly anticipated, and usually involves tens of thousands of people descending on Omaha. Investors will be watching closely for Buffett to share his views on the state of markets, and whether he views the current environment as an opportunity to use some of Berkshire’s $100bn plus cash pile to make acquisitions. Berkshire stock is down 17.1% year-to-date.

Oil giants: Two of America’s biggest oil giants, Exxon Mobil and Chevron, report their first quarter earnings on Friday. Both will be closely watched, with investors looking for insight into how the companies are handling an oil price storm that has included short-term contracts for WTI crude turning negative in the face of a storage capacity crunch. Coming after Shell’s dividend cut yesterday, investors will also be watching for reassurance about the security of both companies’ dividends, and insight into cost cutting measures. Analyst expectations for Exxon and Chevron’s Q1 earnings per share figures were $0.66 and $1.57 three months ago but sit at $0.07 and $0.65 now. Wall Street favours a hold rating on Exxon, and a buy rating on Chevron.

AbbVie: $121bn market cap pharmaceutical firm Abvie is down 7.2% year-to-date. The company is currently in the process of closing its acquisition of Allergan, which is known for making botox. When the company reports its quarterly earnings on Friday, investors will be watching for any delay to the deal closing caused by the current crisis. The deal promises to diversify AbbVie’s revenue streams, which are currently dominated by the $19bn in annual sales generated by anti-inflammatory drug Humira. Analyst expectations for the firm’s Q1 earnings figures have improved over the past three months, with Wall Street anticipating EPS of $2.25.

A member of the Executive Board of the European Central Bank (ECB) has made a supportive statement on the future of digital currencies.

In a recent blog post, Fabio Panetta said that the ECB is looking into “possible future avenues by assessing the case for issuing a “digital euro”.” He added that there is a high-level task force within the ECB exploring both the benefits and the disadvantages of introducing a digital currency.

The major crytpoassets themselves had a volatile session yesterday, with Bitcoin and Ethereum both charging higher in early trading to peaks of $9,300 and $223 respectively before settling back down around 5% lower.

All data, figures & charts are valid as of 01/05/2020. All trading carries risk. Only risk capital you can afford to lose.