A fairly flat open for European markets this morning as momentum subsides in the rally, thanks to lockdown easing and oil resurgence. Under President Trump’s threat of more tariffs, increasingly tense US-China relations were offset by a fairly neutral valuation of the yuan set by the Chinese central bank. The UK and the US have also embarked upon talks on a trans-Atlantic trade deal with both parties keen on getting a deal over the line to help rejuvenate the pandemic-ravaged economy. However, there are a few sticking points on which the sides do not agree, with Britain purportedly holding firm on GM crops, drug pricing and the NHS.

Yesterday’s gains for oil producers helped offset more dreadful corporate results. Walt Disney Co delivered its earnings for the first three months of 2020 yesterday, reporting a 91% drop in net income year-over-year as the impact of the lockdown hit home. However, revenues jumped thanks to the firm’s new Disney streaming service which has already passed 50 million paid subscribers. With the combination of Disney , Hulu and ESPN , all of which Disney owns, the firm now has around half the streaming subscribers of Netflix. The firm has not confirmed if or when the Disney service will be profitable, but the subscriber growth helped temper investor reactions to the dismal profit figures. Disney is currently facing theme park closures, delays on franchise movie productions, reduced advertising revenue from its TV arm and more. The firm also announced yesterday that it will not be paying a dividend scheduled for July, which will save it around $1.6bn in cash. The Tuesday earnings release was the first for Bob Chapek in his new role as CEO, but his predecessor Robert Iger (now executive chairman) was first to speak on the analyst call, and has apparently been brought back into the day-to-day fold due to the crisis. 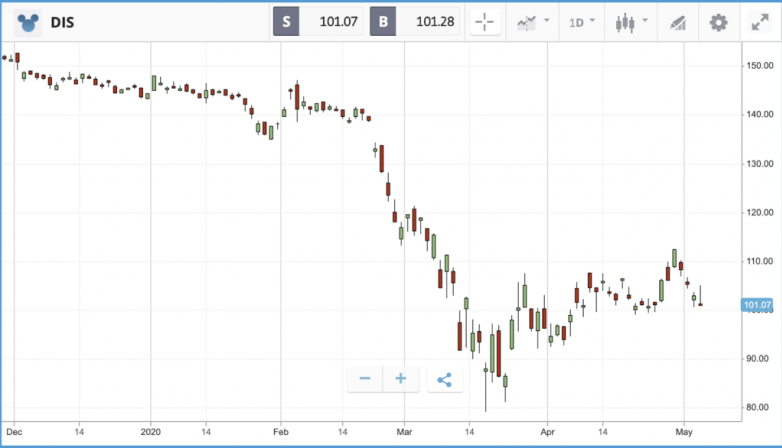 In political news, the White House said yesterday that its coronavirus task force will begin to wind down later in May, while the Trump administration is reportedly pushing the European Union to support an investigation into China’s handling of the virus and the origins of the pandemic.

US stocks enjoyed a positive day, with the Nasdaq Composite once again close to a year-to-date gain. The index gained 1.1% yesterday, leaving it down just 1.8% in 2020 so far. It was led higher by a 6% gain from Regeneron Pharmaceuticals, which announced better than anticipated Q1 profits, and said that it plans to begin human testing for a Covid-19 treatment in June. Late on Tuesday, Gilead Sciences also announced that it is in discussions with chemical and pharmaceutical companies in order to make Remdesivir, its anti-viral drug that could be a potential treatment for Covid-19.

Beyond the pharmaceutical sector, Uber and Lyft made headlines yesterday after it was revealed that the state of California is suing the firms over how they classify their workers. The ride hailing companies have been doing everything possible to avoid having their drivers classified as employees, which would entitle them to paid sick leave, unemployment insurance, minimum wage and more.

New car registrations fell 97% in April versus the same month last year, with only 4,321 cars registered, according to a trade body. That figure is the lowest monthly result since 1946 and was only as high as it was due to commercial orders placed before the crisis hit.

IHS Markit also put out its April report on the UK services sector, in which 79% of services businesses reported a fall in business activity. Tim Moore, economic director at IHS Markit, said that “the April survey reading is consistent with the economy falling at a quarterly rate of approximately 7%, but we expect the actual decline in GDP could be even greater”.

CVS Health: CVS Health is currently in the midst of a huge hiring drive, recruiting some 50,000 staff members across the US in order to handle the surge in business it has seen due to the coronavirus pandemic. The business has faced challenges keeping warehouses stocked and managing a barrage of calls from customers. The firm’s share price is down 17.6% year-to-date, worse than the broader market but better than rival Walgreens, which is down 28.7%. When the firm reports its first quarter earnings today, investors will be watching for how heightened demand for specific products and services balance against the costs of the disruption for CVS. Currently, 18 Wall Street analysts rate the stock as a buy, one an overweight and eight a hold.

Lyft: Ahead of rival Uber reporting on Thursday, Lyft will announce its latest set of quarterly earnings today. The firm has already said in recent weeks that it is laying off just under 20% of its global workforce in response to the current crisis. Unlike Uber — which has a partial cushion in its UberEats delivery service — as a pure play business Lyft is far more exposed to the drop off in demand for ride hailing apps. Its stock is down 38% year-to-date, versus Uber’s 5.6% decline. Analysts will likely be probing management on just how big a setback this is for the firm’s route to profitability.

ADP jobs report: Ahead of Friday’s release of the official jobs report for April by the US Bureau of Labor Statistics, the National Employment Report from payroll services provider ADP will provide an insight into the hiring activities of private employers on Wednesday. Last month’s figures were underwhelming, with the report showing 27,000 US private sector jobs cut in March, but that data was collected for a period that ended on March 12, before the real impact of the economic shutdown was seen. Consensus expectations for the figures being released tomorrow are for a figure of around 20 million private sector jobs lost in April.

Once again there are more than 300 firms reporting earnings in the US today, with more than 50 $10bn plus market cap firms. Aside from those listed above, others to watch include Paypal, General Motors, T-Mobile, Square, Wynn Resorts, and Royal Caribbean.

Crypto corner: Bitcoin miners in one last hurrah before halving

The Bitcoin network has seen its hash rate, which measures the computational power within the network, rocket back near to all-time highs, according to FX Street. The hash rate measures how much computer processing power is being put to work at any one time by the whole of the Bitcoin network, and it always rises and falls in reaction to miners’ contributions to the network. With the halving event just days away, the network has seen the hash rate climb just below the levels seen in February.

The jump comes as Bitcoin and other cryptoassets continue to see prices climb higher. Both Bitcoin and Ethereum have rocketed in recent weeks, and Bitcoin is this morning back above the $9,000 mark, while Ethereum is at $205.