Markets have bounced this morning as governments began to outline plans to ease lockdown measures. The announcements from Italy and Spain, amongst others, have seen European markets up with gains of around 2% for the FTSE and Dax. US Futures pointing towards a 1% firmer open as California also announced easing of restrictions.

Oil majors are among the biggest gainers as investors anticipate the recovery of fuel demand. WTI itself is poised for yet another positive session following last month’s capitulation and is trading around $23.70 a barrel after hurdling a potential resistance level around $21.50 overnight. 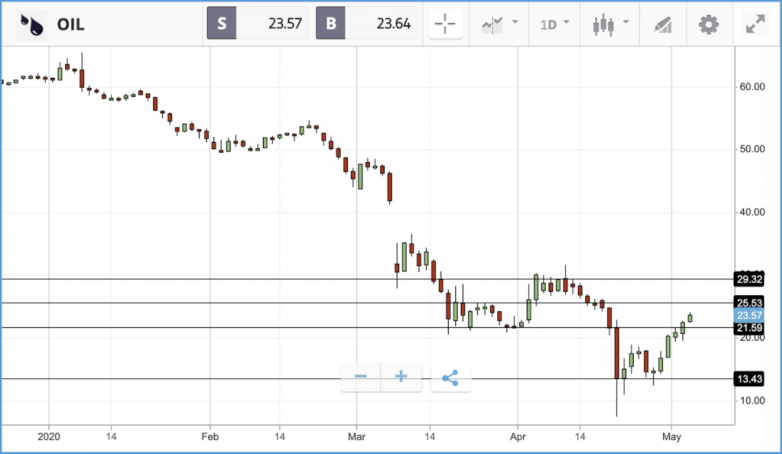 Yesterday, however, there was more bad news from the aviation industry, with two of the sector’s heavyweights announcing major job cuts. General Electric announced that it will cut as many as 13,000 jobs in its jet engine division due to the havoc the pandemic has wreaked on the aerospace industry, permanently reducing the GE Aviation global workforce by up to 25%. Both Boeing and Airbus have cut back production of new planes, with jet servicing demand also practically nonexistent. United, one of the major US carriers, is also reportedly planning to slash roles, including 30% of management roles. According to internal memos seen by Reuters, the firm plans to cut at least 3,400 management and admin positions in October, and has warned pilots to brace for potential changes as well. United is currently using US government payroll support that prevents it from making any job cuts before the end of September, but airlines are anticipating that demand will not have sufficiently recovered by then to prevent them from needing to take drastic action once that period is over.

US stocks started the week on a positive note, with the Nasdaq Composite the biggest winner out of the three major US indices with a 1.2% gain. The index was led by Tesla, which climbed 8.5%, and chipmaker Advanced Micro Devices, which gained 5.4%. In corporate news, L Brands and investment firm Sycamore Partners said that their deal to take Victoria’s Secret private has been called off by “mutual agreement”. L Brands stock fell by 15% in late trading after the news was revealed.

In another sign of the damage being done to the retail sector by the pandemic-induced lockdown, J. Crew Group filed for bankruptcy yesterday, the first major retailer to do so as a result of the current crisis, in the face of lost sales and a mountain of debt.

In earnings news, Tyson Foods reported that its first quarter profits fell 15% year-over-year, and executives warned that US hog processing capacity has been nearly cut in half due to closed slaughterhouses. The firm’s share price closed the day 8% lower following the release.

Aviation and finance names drag on the FTSE 100

Aviation names were the biggest drag on the FTSE 100, with easyJet, Rolls Royce and International Consolidated Airlines Group sinking 7.2%, 6.9% and 5.2% respectively, following mass job cuts announced by Rolls Royce over the weekend. easyJet stock is now down 63% year-to-date, while key rival Ryanair has fallen 37%.

Finance names were also a weight on the FTSE, with Lloyds Banking Group, Standard Chartered, Standard Life Aberdeen, M&G, Royal Bank of Scotland and Aviva all losing more than 2%. In the FTSE 250, 10 firms posted share price falls of more than 8%, including WH Smith Plc, Provident Financial, and Cineworld Group. At the top end of the FTSE 250, Royal Mail gained 5.7%, after it was revealed that Czech billionaire Daniel Kretinsky had bought up a more than 5% stake in the firm.

The Walt Disney Company: Walt Disney Stock is down 28.7% year-to-date, a significantly worse performance than the broader market. Investors will be watching Disney’s earnings carefully today to see how the different pieces of its entertainment empire balanced against each other in the first quarter. While the firm is facing the impact of theme park shutdowns that forced it to furlough more than 40,000 workers, it will also likely have benefited from an uptick in subscribers to its Netflix rival, Disney . Analyst expectations for the quarter three months ago pointed to an earnings per share figure of $1.39, but that has sunk to $0.91 on the eve of the results.

Regeneron Pharmaceuticals: Pharma giant Regeneron has been one of the biggest winners of 2020, with its share price soaring 44.3% year-to-date. The firm is on the front line of efforts to combat Covid-19, and is making progress towards therapies and regulatory approval. Those efforts will likely be a primary focus when the firm reports its first quarter earnings on Tuesday, and the commercial benefits Regeneron expects to derive from success at fighting the virus. Positive news on the fight against the virus may also prove supportive for the broader market.

Fiat Chrysler: Automakers have been hit hard by the coronavirus pandemic, with mass production shutdowns and collapsing demand. Analyst expectations for Fiat Chrysler’s Q1 earnings per share figure, which will be reported today, have collapsed from $0.59 three months ago to $0.13 now. Rival Ford has already announced 7,000 job cuts, while Fiat Chrysler itself has let thousands of contract workers go indefinitely. Fiat Chrysler stock is down more than 40% year-to-date, a similar fall to Ford and General Motors.

There are over 300 companies reporting earnings in the US today, including more than 50 with a market cap of over $10bn. Other highlights include oil names Occidental Petroleum and Marathon Oil, plus video game firms Activision Blizzard and Electronic Arts.

Bitcoin’s measure of mining difficulty adjusted to 16.10 trillion yesterday as the halving event approached. This is close to the all-time high of 16.55 recorded in March according to Coindesk. The difficulty of mining the cryptoasset adjusts depending on the number of people mining – the more computing power thrown at it, the harder it is to mine. It is the final difficulty change in mining and only the second occasion that the difficulty score has peaked over 16 trillion, ahead of the anticipated halving event.

Bitcoin performed well over the day, up nearly 5%, and spiked over $9,000 in early trading this morning. Elsewhere, both XRP and Ethereum booked good days, up over 4% and 5% respectively.