Markets point higher as lockdown rules are tweaked in UK

European markets have edged higher this morning, building on gains made in Asia overnight, as several countries — including the UK, France and Italy — reported the fewest number of virus deaths since March over the weekend.

The FTSE 100 and other indices were set for a firmer start after both Japan and Hong Kong saw markets climb, with the Nikkei up 1.1% and the Hang Seng ahead by 1.4%.

The positive start to the week comes after a crucial televised address last night from the UK Prime Minister, in which the rules around the lockdown in the UK were changed.

While social distancing is still being enforced, the Prime Minister urged those in some sectors, such as construction, who could safely return to work to do so. It was an address that left most commentators and members of the public unsure of what is expected of them. More is to come; the Chancellor is expected to announce measures tomorrow aimed at weaning businesses off the Government’s furlough scheme. 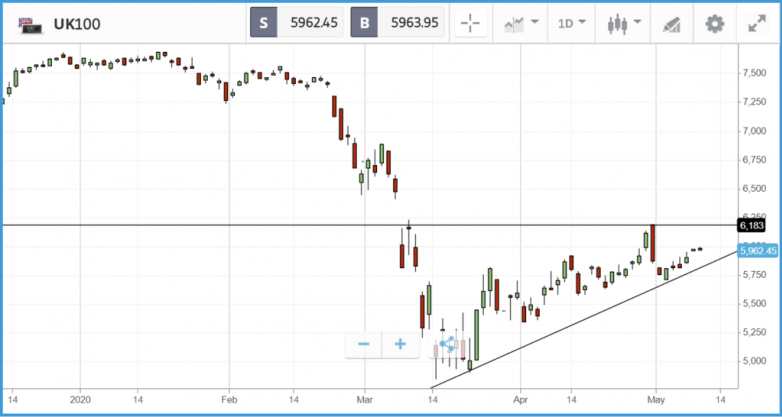 While the UK was on Bank Holiday on Friday, the US Labor Department reported that the US unemployment rate spiked to 14.7% in April, well beyond the peak of 10% seen in 2009 at the end of the Global Financial Crisis. The report showed that around three quarters of the 20 million jobs lost during the month are classed as temporary, meaning businesses hope to hire them back when the economy re-opens. Just two months ago, the unemployment rate was at a five-decade low of 3.5%, and jobs had been added to the economy for more than 100 consecutive months.

The only period on record where the unemployment rate surpassed April’s rate was the Great Depression, where more than one in five people found themselves out of work. In April, the hospitality sector was hardest hit in both absolute and percentage terms, with 7.7 million jobs lost, almost half the jobs in the sector. The transport, education/health, professional services, and manufacturing sectors all lost more than a million jobs each.

Following the report, on Sunday Minneapolis Federal Reserve president Neel Kashkari warned that optimistic economic forecasts provided by White House officials are not realistic. Kashkari said that he anticipates a “slow, more gradual, recovery” and that virus flare ups should be expected as countries relax their economic controls.

Despite this, markets spiked as the report came out on Friday in a ‘bad news means good news’ sentiment as markets priced in further stimulus to combat the economic effects of the virus. We have now learned that the White House will begin talks with both parties in Congress today about adding to the $3 trillion of coronavirus relief that has already been allocated. 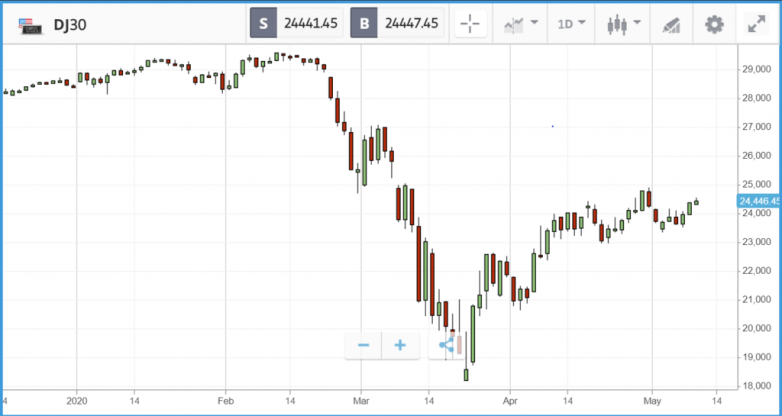 US stocks soared last week, with the Nasdaq Composite gaining 6% and the S&P 500 up 3.5%. The Nasdaq was helped by a solid gain from $1.3trn market cap giant Apple, which closed the week 7.3% higher, taking the index within 7% of its all-time highs from February.

Energy stocks also had a solid week, driven by a slowing rise in domestic oil inventories, investment firm T. Rowe Price noted in a Friday note. The price of WTI Crude June contracts is still below $25 a barrel but rallied by close to 20% over the course of the week. T. Rowe’s traders also highlighted that during the week Federal Funds futures contracts traded at levels implying expectations of negative interest rates next year, despite the Fed’s unwillingness to turn rates negative.

In earnings news, Uber gained more than 17% on the last two days of the week, after announcing its first quarter results. The firm posted a loss for the quarter of almost $3bn, laid off around 14% of its corporate staff this week, and is facing a lawsuit from the state of California, but investors were buoyed by comments from CEO Dara Khosrowshahi indicating that ride volume is picking up after bottoming out in April.

UK markets were closed on Friday for a public holiday, but the FTSE 100 gained more than 3% between Monday and Thursday, while the FTSE 250 had a positive but more pedestrian week. The shortened week ended on a high, with the FTSE 100 gaining 1.4% on Thursday despite the Bank of England warning that UK unemployment will double and the economy will shrink by 14% in 2020, with a 25% drop in the second quarter.

In M&A news, it was revealed at the end of last week that Virgin Media and O2 are planning to merge in a GBP31bn mega deal, in what could be a significant blow to rivals including BT and Sky. BT stock plunged 8% on Thursday following the news, and after announcing that it is suspending its annual dividend for the first time in close to four decades — a move that will save it around GBP2.5bn. BT shares are now down more than 45% year-to-date.

In economic data, the Bank of England’s monetary policy committee voted unanimously to keep interest rates at 0.1%. The UK construction sector suffered its biggest contraction on record, with the construction purchasing managers’ index for April sinking from 39.3 in March to 8.2 in April — any reading below 50 indicates contraction, and the index’s previous record low was 27.8 in 2009.

Marriott International: The share price of hotel giant Marriott is down 42.4% year-to-date, lagging well behind the broader market. Investors will be watching the firm’s Q1 earnings report closely to see how deep the bleeding from mass hotel closures and a collapse in global travel demand will be. A rebound in demand in China is one potential bright spot, but the firm currently has a quarter of its hotels worldwide closed entirely and has furloughed tens of thousands of employees. Analyst expectations for the firm’s Q1 earnings per share figure stood at $1.44 three months ago but have now sunk to $0.87 — with expectations for Q2 now at just $0.01. Currently, six analysts rate the stock as a buy or overweight, 18 as a hold and one as a sell.

Cardinal Health: Healthcare firm Cardinal distributes medical products and produces surgical products including gloves, generating more than $100bn in annual revenue. Cardinal’s share price is down 1.4% year-to-date, holding up well versus the broader market due to increased demand for its services during the pandemic. The company reports its earnings for calendar Q1 (its financial Q3) today; analyst expectations for the quarter’s earnings per share figure have held steady over the past three months, and Wall Street overwhelmingly favours a hold rating on the stock. Zacks Equity Research noted that cost saving initiatives and competition in its business segments will likely play a role in its earnings report.

Datadog: Datadog offers cloud application monitoring for companies, allowing firms using cloud services to see their full tech infrastructure through a single dashboard. The firm’s share price has soared by close to 40% year-to-date, as demand for cloud services has soared due to mass working from home triggered by the coronavirus pandemic. Datadog went public last year and is sitting on a $15.5bn market cap. The company reports its Q1 2020 earnings on Monday after the US market closes, with analysts expecting it to post a small loss for the quarter. Datadog is sitting on an impressive cash balance, which would allow it to continue making losses for years — but also gives it potential ammunition to make an opportunistic acquisition or tactical investment during the current disruption.

The right side of change

While stock markets have recovered significantly from their lows in late March, that recovery has been uneven, as evidenced by the gap in performance between the tech-heavy Nasdaq Composite index and the Dow Jones Industrial Average (which has heavier weightings to industrial, consumer and financial names). The Nasdaq is now up year-to-date, while the Dow remains down 14.7% in 2020 so far. The disparity in performance highlights an important point: while the market has been recovering, there is a right side and a wrong side to the new economic reality that awaits firms in a post-pandemic world. Trends such as remote working and the adoption of cloud technology have been accelerated by the pandemic, while travel firms potentially face painful years before demand recovers to post-crisis highs.

Bitcoin’s third halving is now days away, but prices slumped over the weekend and the whole scenario looks different to prior halving events.

With less of a sustained price run-up, and the event well publicised, there is talk that many Bitcoin investors may have already incorporated the supply adjustment into their models and taken positions accordingly. The impact of COVID-19 has also resulted in lower volumes as some participants focused on larger adjacent non-crypto markets.

The mining landscape is also different this time around. Mining is now dominated by professional mining companies seeking a profit, and they may decide to hold onto their bitcoin until a new price forms that is much higher than their costs.

Investors certainly appear more nervous, with Bitcoin tumbling almost 15% in the last three days to trade at $8,691 this morning, down from just below $10,000 on Friday, an about-face from a psychologically important resistance level. 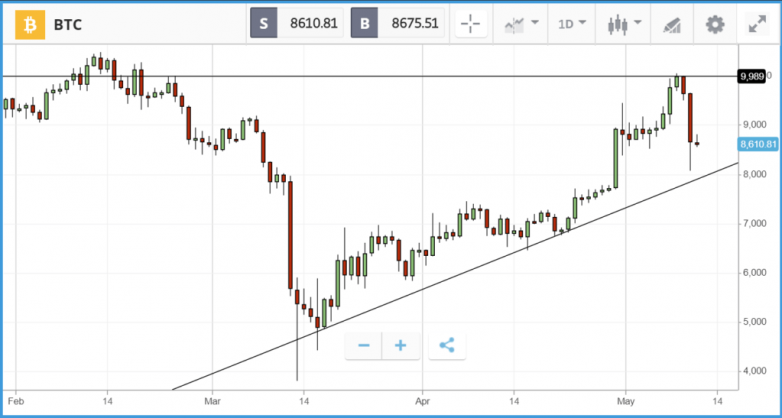