Uber looks to take a bite out of rival Grubhub.

The UK economy saw its biggest slump since the 2008 financial crisis in Q1, official figures confirmed today, with a 2% decline in GDP in the first quarter.

The Office for National Statistics said there had been a “widespread disruption to economic activity, as services output fell by a record 1.9% in Quarter 1”, while it also noted there were significant contractions in production and construction.

Covering the first effects of the virus in the UK, and the policy response, the numbers are likely to get worse from here as it only includes one week of the lockdown imposed by the government. The FTSE100 is down 1.2% as a result this morning, pulling back after challenging the 6000 mark yesterday. 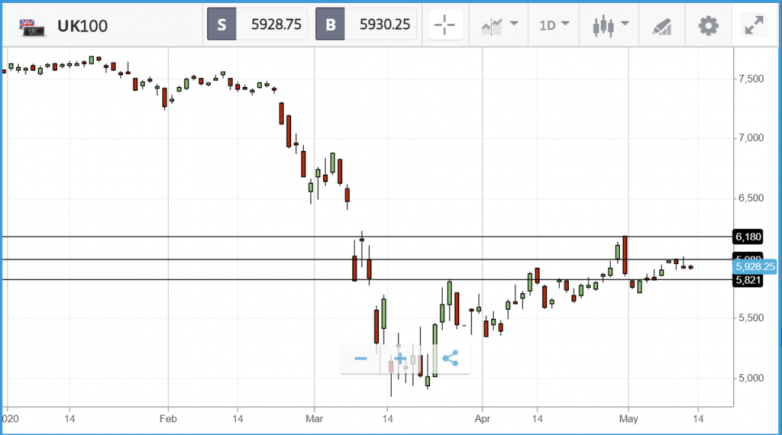 Overnight it was reported that Uber is in acquisition discussions with GrubHub, one of the main players in the American online takeaway delivery market. GrubHub’s share price shot up on the news, closing out the day 29% higher, with the market cap of the business — which went public in 2014 — passing $5bn. GrubHub stock is now up 24.2% year-to-date and 44.5% over the past month, but has delivered a 3.4% loss to shareholders over the past 12 months. Despite the huge popularity of delivery services, GrubHub has had a rough few years in the face of steep competition from rivals including UberEats, Postmates and Doordash. Between late 2018 and the end of 2019, the company’s value more than halved. The combination of Uber and GrubHub would create a giant in a marketplace in which all of the major players are loss making. One of the major hurdles faced by companies operating in the sector is the cost of customer acquisition, with intense competition in the form of generous introductory offers and discounts. In October, GrubHub was forced to cut profit forecasts due to slowing growth, as newer entrants such as DoorDash left their mark.

After going nowhere for much of the day in an uneventful trading session, US stocks sold off heavily in the final few hours of trading, with the S&P 500 finishing the day 2.1% lower. The selloff came after the Labor Department reported that the consumer price index, one measure of inflation, fell by 0.8% in April — the largest decline since the depths of the global financial crisis. All 11 sectors in the S&P 500 closed out the day in the red, with real estate, industrial and financial stocks the worst performers. Asset managers were among the biggest fallers in the index, with BlackRock, Invesco, and Franklin Resources (the holding company of Franklin Templeton) all closing the day more than 7% lower.

In the Dow Jones Industrial Average, which lost 1.9%, 29 of its 30 constituent stocks delivered a negative day, with Walmart’s 0.1% gain the only positive.

Oil prices fell slightly during the day, but WTI Crude contracts for June delivery remain over $25 a barrel.

Large cap London-listed stocks enjoyed a positive day yesterday, with the UK market closing before the US sell-off began. Helping sentiment was the news that the Treasury’s furlough scheme, which is currently funding millions of workers to stay at home, is being extended to October. The Bank of England’s deputy governor also said that the central bank will keep under review the potential to cut UK interest rates below zero to support the economy, in an interview with CNBC.

The FTSE 100 closed out yesterday up close to 1%, led by gains of more than 7% posted by Vodafone and Ocado, while tobacco giants Imperial Brands and British American Tobacco both climbed over 3%. Supermarkets also enjoyed a solid day, with Tesco, Morrisons and Sainsbury’s all in the top 20 gainers. The FTSE 250, which lost 0.6% yesterday, was led lower by double digit losses from names including events firm Hyve Group, property developer Hammerson and luxury carmaker Aston Martin Lagonda.

Cisco: Tech and communication solution firm Cisco finds itself at an interesting juncture of the Covid-19 pandemic. On one hand, demand for its videoconference tool WebEx has likely been soaring, but company spending on physical technology solutions for office space will have taken a hit in the short term, and may face longer term damage if companies choose to keep portions of their workforces operating from home permanently. The company reports its quarterly earnings for the first three months of 2020 (its fiscal Q3) today. Its share price has held up well versus the broader market, but not compared to the soaring values of some tech firms at present.

Tencent: Chinese technology giant Tencent reports its Q1 2020 earnings today, at 8pm Hong Kong Time (8am in New York). The firm’s US listed ADR (American Depositary Receipt) has gained 14.8% year-to-date, as some of its business lines are clear beneficiaries of the current lockdown environment. Tencent has interests in smartphone gaming, online payments, cloud services and more, all of which are likely to have been supportive during recent turmoil. However, its advertising revenue will have faced headwinds, as will its mobile payments business. The company’s earnings call could also provide useful insight into the state of China’s economic recovery and will be closely watched. Currently 48 out of 55 analysts with ratings on the stock recommend the stock as a buy.

Jerome Powell’s speech: Federal Reserve chairman Jerome Powell is due to speak today, with all eyes on the central bank leader as speculation increases that the US could consider negative interest rates — something the Fed has previously indicated it would not resort to.

The Wall Street Journal first reported overnight that both Coinbase, the largest US-based bitcoin exchange with more than 30 million accounts, and Gemini, which was started by Tyler and Cameron Winklevoss, have agreed a deal to use JPMorgan’s banking services.

The investment bank is primarily providing cash-management services and taking care of dollar-based transactions for the two firms’ US-based customers, according to the Journal’s sources. It will also process wire transfers and deposits and withdrawals using an electronic funds-transfer system.

The move means customers of Coinbase and Gemini will be able to move money between their cryptocurrency accounts and their traditional bank accounts.