It may take until the end of 2021 for the US economy to recover from the pandemic, Federal Reserve chairman Jerome Powell warned over the weekend.

Setting the tone for markets on Monday after giving a rare television interview over the weekend, Powell said that a Great Depression level unemployment figure of around 25% is “about right for what the peak might be.”

However, he argued that there are fundamental differences between the current environment and the Depression era and added that he anticipates it “won’t take that long” to get the US economy back to where it was in February. Speaking about the Fed’s unprecedented economic intervention, Powell noted that the central bank’s intent is not to “move markets to a particular level…we just want them to work”. According to investment firm Edward Jones, to-date the response to the pandemic from the Fed and the US government has totaled 14% of GDP, and could go higher, versus only 4% of GDP during the 2008/09 crisis.

Despite this, markets have made steps higher, buoyed by hopes that the lockdown which has halted global economic growth in its tracks is now easing. Japan’s Nikkei closed up 0.5%, while Hong Kong’s Hang Seng is currently up 0.3% and poised to end higher. The FTSE and DAX are up over 2% each and futures point towards a 1% firmer open for US bourses.

Late last week, the US Democrat majority House of Representatives passed a new $3trn stimulus bill, but there are significant negotiations to come for it to pass the Republican controlled Senate. Analysts expect that those negotiations could take weeks, meaning it could be June before the next stimulus package kicks in.

US stocks sank by more than 2% last week — the third negative week in four — as investors reacted to a deluge of information. In addition to Powell’s earlier speech on Wednesday where he warned of the deeper economic impact to the US economy, there were concerns about a flare up in US-China tensions, negative outlooks from some top hedge fund managers, and a record drop in retail sales, according to a note from analysts at T. Rowe Price.

While healthcare and consumer stocks held up well during the week, energy stocks lagged despite further WTI crude oil price gains, and real estate shares were weak due to concerns about retail tenants. Growth stocks also continued to outperform value; year-to-date, the Russell 1000 Growth Index is almost flat, versus a more than 22% fall for the Russell 1000 Value Index. Despite the weekly drop, the Nasdaq Composite remains in positive territory year-to-date, and was led higher on Friday by Nvidia, Vertex Pharmaceuticals and Baidu, which all gained more than 4%.

In corporate news over the weekend, Apple announced that it will be reopening 25 stores in the US this week, with temperature checks and masks required for customers to enter.

Despite a Friday rally, London-listed stocks sank last week. In addition to the headlines and economic data out of the US, investors also got a view into the impact of the pandemic-induced lockdown on UK GDP, alongside March industrial and manufacturing production numbers. The UK economy shrank by a record 5.8% in March versus February, with Q1 GDP falling 2% versus Q4 2019 — the largest drop since the global financial crisis. UK data is reported with a bigger lag than economic data in the US, meaning a lot of March data is only just feeding through. March industrial production sank 8.2% versus the previous year, while manufacturing production fell 9.7% year-over-year.

Similar to the US, small cap stocks underperformed their large cap counterparts last week, with the FTSE 250 sinking 3.6% versus 2.3% for the FTSE 100, despite the 250 jumping 1.7% on Friday. The FTSE 100 also gained 1% on Friday, led by 5% plus share price pops from firms including miner Anglo American, BT Group and cruise firm Carnival. On Friday, it was reported that BT is currently in talks to sell a multi-billion pound stake in its Openreach broadband network division.

Baidu: Chinese internet firm Baidu reports its first quarter earnings after the US market closes today, with a late evening (New York time) earnings call. The company’s Nasdaq listing has fallen 21% year-to-date, well behind the tech sector which has held up relatively well versus the broader market, as the firm is likely being hurt by a tough online advertising market. Baidu is reporting its earnings amid reports that a former executive of the firm is being investigated for corruption. Investors are sensitive to such accusations at present, following controversy surrounding Nasdaq-listed Chinese company Luckin Coffee, which announced at the beginning of April that an internal audit had found evidence of fabricated sales numbers.

Imperial Brands: Tobacco giant Imperial Brands reports its latest set of quarterly results on Tuesday. The firm has held up far better than the broader UK market during the recent turmoil, with its share price down 12.9% year-to-date, versus 23.1% for the FTSE 100. The share price drop has pushed the company’s dividend yield up to around 13%; that figure may not be sustainable for the long-term, but points to how cheaply the company is valued by the market at present versus rival British American Tobacco, which yields just under 7%. Investors will be watching for signs of the company’s plans for its dividend closely on Tuesday.

Political events continuing in the background

For investors, companies, and governments alike, the majority of the focus over the past few months has been on responding to the coronavirus pandemic. But there are two major political events coming up this year that should not be forgotten. First, the US election in November is rapidly approaching, where bookmakers have incumbent Donald Trump as a marginal favourite to win the presidency over Joe Biden. However, President Trump’s approval has been hurt rather than helped by the pandemic, the opposite of what has happened for most major world leaders. The majority of Americans disapprove of the president, while polling currently points to Joe Biden being out in front. On the other side of the Atlantic, the UK’s negotiations with the European Union over Brexit are making “very little progress” according to the UK government. Although negotiator David Frost has said a trade agreement would be reached by the end of the year, the prospect of a stalemate is looming.

Institutional investors are said to be behind a boom in options trading in Bitcoin after the recent halving event.

Whilst the initial reaction to the halving was muted, the price has been hitting the $10,000 mark since then, with statistics showing a spike in activity for call options.

According to CoinTelegraph, the combined amount traded on Bitcoin’s options market exceeded $140m over the last ten days, a huge jump from trading levels seen before the halving. In morning trading Bitcoin was sitting just below the $10,000 at $9,775. 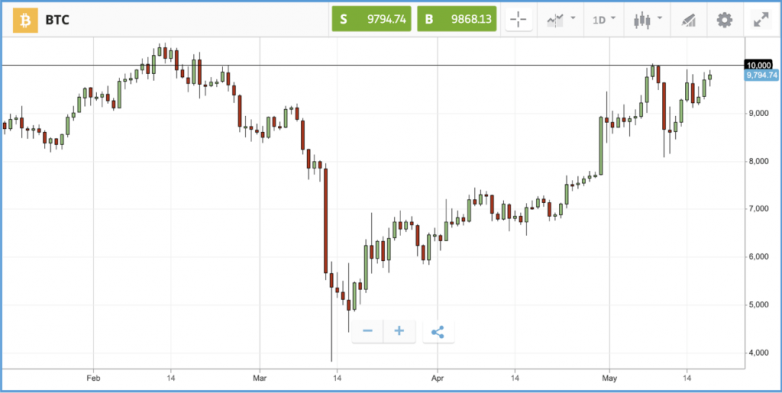 All data, figures & charts are valid as of 18/05/2020. All trading carries risk. Only risk capital you can afford to lose.