Despite taking a slight breather this morning with a fairly flat open, stocks rallied around the world yesterday, driven by developments in the race to produce a coronavirus vaccine, a rebound in global oil prices, and hopes of further economic stimulus in the US.

The S&P 500 closed the day 3.2% higher, led by energy, industrial and financial stocks, while the FTSE 100 gained 4.3%. Energy stocks gained 7.6% overall in the broader rally, with the energy equipment and services subsector jumping 13% and the oil, gas and consumable fuels sector up 7.1%. Those gains were driven by the rising price of oil, as WTI Crude contracts for July delivery jumped to $33. Lastly, the message investors chose to take from Federal Reserve chairman Jerome Powell’s weekend interview was that the central bank has more tools it can deploy to support the US economy. 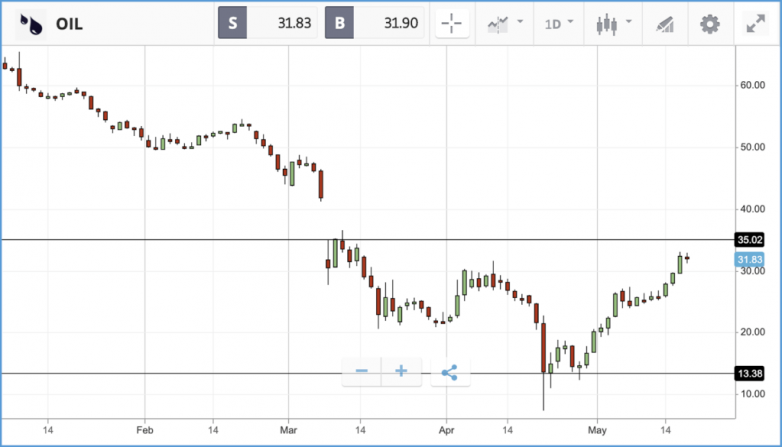 Uber laying off another 3,000 employees

Of the three major US stock indices, the Dow Jones Industrial Average led the way yesterday, gaining 3.9%. The index was led by Boeing, Raytheon Technologies and Dow, which closed 12.9%, 9.8% and 9.5% higher respectively. Overall, more than a third of the index’s 30 components gained more than 5%.

In corporate news, Uber announced it is laying off an additional 3,000 corporate workers, after cutting 3,700 employees — then 14% of its workforce — earlier this month. The cuts include shuttering or consolidating 45 offices; Uber’s share price closed 3.5% higher following the news. Elsewhere, SoftBank is reportedly in talks to sell a part of its T-Mobile stake, with a figure of around $20bn on the table.

Travel names were among the biggest gainers in the S&P 500 on Monday. United Airlines’ share price jumped 21.1%, as the vaccine news gave investors hope of a route back to normality for airline stocks. Similarly, Expedia gained 18.6%, Norwegian Cruise Lines 18% and Marriott International 17.3%.

Despite a survey showing that more than a fifth of UK employers are planning layoffs over the next three months, and a warning from the Bank of England’s chief economist that the UK runs the risk of returning to 1980s levels of unemployment, London-listed stocks joined the global rally yesterday.

Walmart: Grocery giant Walmart’s 90% plus share price gain between the beginning of 2016 and end of 2019 was in part driven by the firm’s successful transition to an online world. The company reports its Q1 2020 earnings today, having outperformed the broader market by a significant margin in 2020. Year-to-date, Walmart stock is up 7.4%, and 25.8% over the past 12 months. Investors will be watching the earnings report closely for signs of how the company’s e-commerce business has benefited from the pandemic versus other giants such as Amazon. Analyst expectations for the company’s Q1 earnings are close to where they were three months ago. Currently, 24 analysts rate the stock as a buy or overweight, seven as a hold, and two as an underweight or sell.

Home Depot: Home improvement retailer Home Depot has been another beneficiary of the coronavirus pandemic, with its share price up 12.4% year-to-date. Along with rival Lowe’s, the firm is benefiting from Americans choosing to use their time stuck at home for DIY. The company reports its latest quarterly earnings on Tuesday investors will be watching closely for how sales have held up, with DIY demand facing off with supply chain issues and altered operating hours. Currently, 20 analysts rate the stock as a buy or overweight, 10 as a hold, and one as an underweight.

NetEase: Nasdaq listed Chinese Internet and gaming firm NetEase reports its first quarter earnings late this evening New York time. The company’s Nasdaq listing has jumped 24.5% year-to-date, as its online gaming business is a clear potential beneficiary of people being stuck at home. According to Zacks Equity Research, some new gaming title launches in China are likely to have helped drive subscriber growth for NetEase in the first quarter, although a weak online advertising market may have hurt the firm.

Mining of Bitcoin blocks has slowed to its slowest pace since 2017, thanks to the recent halving event. The halving saw the reward for mining a Bitcoin token cut by 50%.

As a result, the creation of new blocks has slowed, according to one analyst. On Sunday just 95 new Bitcoin blocks were created, an event the analyst explained, that had only occurred eight times in the last decade.

Bitcoin blocks are files where records of the Bitcoin network are kept and are created as miners mine the cryptoasset. A slowing of the block creation is contiguous with a slowdown in mining.

Bitcoin’s price has tread water in the past 24 hours, down around 2% in all. Elsewhere, Ethereum was also down by just over 1% and XRP down the same.

All data, figures & charts are valid as of 19/05/2020. All trading carries risk. Only risk capital you can afford to lose.