Markets have had a slightly softer open this morning following their rally yesterday, with the S&P 500 having gained 1.7%, taking the index’s return over the past five trading days to 5.4%. US futures currently indicating around 0.7% of those gains will be given back. This follows on from a cautious session in Asia overnight ahead of a key policy meeting in China where more stimulus measures may be unveiled. 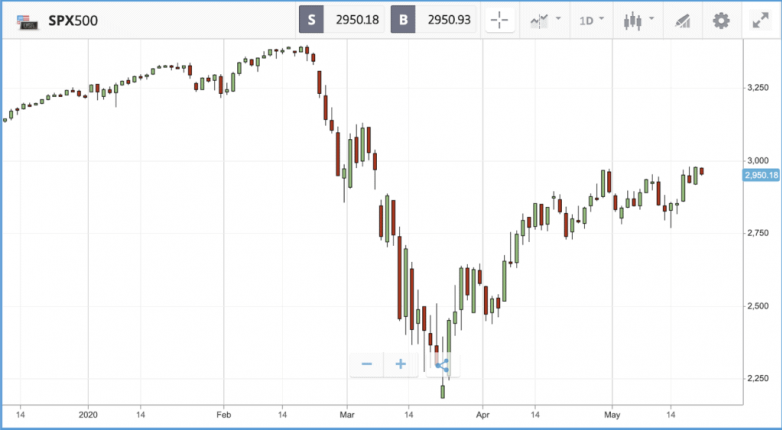 Investor sentiment this week has been buoyed by a variety of factors, including promising reports from an early human trial of a Covid-19 vaccine, and all 50 US states beginning to reopen in some form. Yesterday, Connecticut became the final state to take the first steps toward lifting restrictions, with shops and restaurants allowed to reopen. There are significant concerns of a second wave as the lockdowns end, and as of yesterday more than a dozen states had registered an upward trend in average daily cases over the past week.

So far, more than one and a half million people in the US have tested positive for the virus, and close to 100,000 have died. States are reopening at rapidly different paces, with some including Georgia and Texas undertaking aggressive plans, while states such as New York and California approach the situation more cautiously.

Elsewhere, easyJet have said they will resume flights on some routes from the 15th June. It will be strongly advised to wear face masks during the flight, there will be no food served on board and 1.5m distancing where possible. This comes just after the company announced that it had been victim of a huge cyber attack that affected 9 million customers. 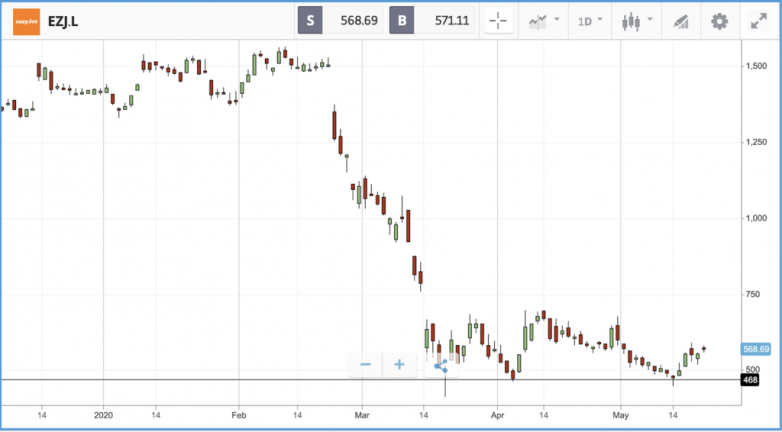 Energy stocks were the biggest winners in yesterday’s rally, gaining 3.8% overall, while oil prices were marginally higher. National Oilwell Varco and Halliburton were two of the biggest energy sector gainers on the day, closing 8% and 7.2% higher respectively. All 11 sectors in the S&P 500 were in the green, with the communication services, financials and information technology the other sectors which gained more than 2%. The Dow Jones Industrial Average, which closed Wednesday 1.5% higher, was led by 4% plus gains from Walt Disney, Intel and American Express.

In earnings news, Target reported that its online sales growth had been accelerating every month during the pandemic period, almost tripling for April. The firm said that five million new customers shopped using its website during the first calendar quarter of 2020. Overall, the company beat both earnings and revenue expectations, although sales growth of 11.3% year-over-year was outpaced by an 18.5% jump in the cost of sales.

London-listed stocks closed the day higher, with the FTSE 100 up 1.1%, as Bank of England governor Andrew Bailey said that negative interest rates in the United Kingdom were under “active review.” The statement is a U-turn on his position a week ago, when he said that the central bank was not contemplating negative rates. Accompanying the governor’s statements, for the first time on Wednesday, investors accepted a negative price in a gilts auction. Leading the FTSE 100 were credit ratings firm experience, sales and marketing firm DCC, and equipment rental company Ashtead. Experian’s 8.2% gain came after it reported a solid set of first quarter earnings; while pretax profits fell marginally year-over-year, revenues were up from $4.9bn to $5.2bn.

The FTSE 250 lagged the FTSE 100 again on Wednesday, climbing just 0.3%. Marks & Spencer was one of the biggest winners of the day, finishing 10.8% higher after reporting its own earnings. The share price pop came despite the firm reporting it has taken a huge cost hit on unsold clothing that is sitting in warehouses, although M&S said it was able to cancel some stock orders, and is storing stock to sell next spring.

Nvidia: Chipmaker Nvidia is one of 2020’s biggest success stories, with its share price up close to 50% year-to-date, and 131% over the past 12 months. Earlier this week BMO Capital Markets analyst Ambrish Srivastava described the firm as “uniquely positioned” to benefit from an acceleration in the adoption of cloud computing and the data centers which will be required to support that. The firm reports its Q1 2020 results today after the market close, and investors will be watching closely for signs that the mammoth stock price rally during the pandemic has been justified. Nvidia also stands to benefit from the adoption of 5G technology, although it does face headwinds such as a deterioration once more in US-China relations. Currently, 32 Wall Street analysts rate the stock a buy or overweight, five a hold, and three a sell.

Retailers: Continuing the deluge of retailer Q1 earnings reports today will be Best Buy and TJX Companies (the firm behind TJ Maxx in the US and TK Maxx in the UK). Electronics retailer Best Buy has fared better than the broader market in 2020, with its year-to-date loss standing at 4.9%, while TJX is down 17.7%. Back in March, TJX announced it was suspending share buybacks, cutting spending and evaluating its dividend program. Analyst expectations for both firms’ earnings per share figures have tumbled over the past three months, with Wall Street actually anticipating that TJX will post a minor loss for the quarter — although analysts heavily favour a buy rating on the stock.

Intuit: Business software company Intuit’s share price has gained 10.9% year-to-date. The company is behind popular American tax filing service TurboTax, and has likely taken a hit during the quarter from the extension of the annual filing deadline to July. Intuit has already warned investors to brace for lower revenue and profits versus guidance, due to the impact the pandemic has had on small businesses that use its software, as well as the filing extension. Analyst expectations for the company’s earnings per share figure have fallen from $6.18 three months ago to $4.63 now.

Bitcoin suffered a flash crash yesterday around 4pm BST losing around $491 value before recovering to over $9500 late on. The fall comes amid rumours that the alleged founder of Bitcoin, Satoshi Nakamoto (a pseudonym), moved some of their holdings. $500,000 worth of Bitcoin, created in the first month of the cryptoasset’s existence, were allegedly moved yesterday morning. Small amounts of the transaction was sent through Crypto exchange Coinbase, Decrypt reports.

While some Bitcoin wallets are known to belong to the legendary supposed creator, it is unconfirmed whether this latest transaction was down to them. But this did not prevent widespread speculation about the ownership as Bitcoin created at such an early stage of its inception are unlikely to be held by many others.

While it is unclear if it were Satoshi, it is likely to be a very early-stage adopter of the cryptoasset, and the timing of the rumours themselves appear to be the source of yesterday’s flash crash.

All data, figures & charts are valid as of 21/05/2020. All trading carries risk. Only risk capital you can afford to lose.