Reports that China is planning to implement new security laws for Hong Kong in response to massive pro-democracy protests that have gripped the city over the past year, sent Hong Kong-listed stocks tumbling on Friday morning. The news was one of multiple headlines out of Asia yesterday, as China said that it will not be setting a GDP target for 2020, and tensions between the US and China continued to rise.

This week the Trump administration approved an arms sale to Taiwan, and the President responded to the news of the new Hong Kong security legislation by saying that the US would respond “very strongly” against China’s attempt to gain more control of the territory. A spokesperson for the China National people’s Congress that said that details of the legislation would be provided on Friday. The news has implications for the Hong Kong Human Rights and Democracy Act, which President Trump approved last year. The act requires that the US State Department certifies annually that Hong Kong has enough autonomy in order to maintain favorable US trading terms.

On the corporate side, Chinese internet firm Baidu is reportedly rethinking its Nasdaq listing, in the face of tightening restrictions on Chinese companies that trade in New York.

US-listed stocks sank yesterday after rallying strongly in the earlier part of the week, with the S&P 500 closing 0.8% lower. Energy and information technology were the hardest hit sectors, falling 1.5% and 1.4% respectively, with the semiconductor and energy services sub-sectors falling 2.5% and 2%. In the Dow Jones Industrial Average, six of the index’s 30 names posted a positive day, led by a 4.3% gain from Boeing. Although it remains down close to 60% year-to-date, Boeing’s stock has rallied 13.5% over the past five days.

In corporate news, IBM announced yesterday that it will be cutting an indeterminate number of jobs, in the face of an economic slowdown that is causing many businesses to cut back on planned IT investments. Chipmaker Nvidia reported its latest set of quarterly earnings yesterday, after a monster 50% plus share price rally in 2020 so far. The firm reported that its revenue had jumped by just under 40% versus the first quarter of 2019, with data-center sales topping $1bn for the first time. Nvidia stock fell 2.2% during market hours, then a further 1% in late trading.

Facebook also made headlines on Thursday, after founder and CEO Mark Zuckerberg announced to employees that the firm is planning to permanently transition large parts of the social media giant’s workforce to remote working.

The FTSE 100 sank 0.9% yesterday, with hotel and restaurant firm Whitbread — the parent company of Premier Inn — the biggest faller in the index, closing 13.4% lower. Whitbread’s share price plummeted after it announced plans to raise GBP1bn from shareholders to bolster its finances, and warned that it may not make a profit this year as it burns through GBP80m in cash a month due to the economic shutdown. The company is working on the assumption that its hotels will not all be fully open again until September.

Lloyds Banking group also faced a negative day, closing 4.9% down, after a third of its shareholders rejected its pay plan for the firm’s top bosses. Iss, a shareholder advisory group, queried whether more restrictive share incentive schemes were sufficient, as under the new structure the probability of receiving the bonuses is higher.

The FTSE 250 finished Thursday marginally higher, led by 5% plus gains from names including travel firms Stagecoach and Trainline.

Alibaba: Chinese e-commerce and internet giant Alibaba reports its latest set of quarterly earnings this morning New York time. The firm’s Nasdaq listing is flat year-to-date, and up 36% over the past 12 months. Alibaba’s report follows strong results from JD.com, another major Chinese online retailer, and Amazon posting a surge in revenues. Reports that Baidu is considering delisting from the Nasdaq exchange could potentially be raised by analysts on the firm’s earnings call, and they will also be looking for any insight the firm can provide into China’s economic reopening, as well as whether its cloud business has given its quarter a boost.

Deere Company: Farm equipment maker Deere’s share price is down 17.6% year-to-date, lagging the broader market, although investors will be hoping the company’s business has held up relatively well given that agricultural products are still in demand despite the pandemic. Deere’s earnings are impacted by global trade, however, plus the shutdown of its facilities due to the pandemic, and the economic uncertainty at present may have put some customers off making significant investments in new equipment. Analyst expectations for the firm’s earnings per share figure for the quarter being reported have fallen from $2.91 three months ago to $1.69 now.

Pinduoduo: Pinduoduo is another Chinese e-commerce firm with a Nasdaq listing, that has enjoyed a huge share price rally in 2020 so far — jumping by more than 50%. The company reports its Q1 earnings results on Friday morning New York time, after being downgraded from a buy rating to neutral by a Bank of America analyst. Pinduoduo has a unique social element to its online shopping platform, and has more than half a billion users.

Bitcoin has extended its losses this morning, with the cryptoasset losing another 0.5% to add to yesterday’s 4.5% fall. The key resistance level of $10,000 is proving to be a difficult hurdle to overcome, with several failed attempts this month. It is now back trading close to the $9,000 mark. Bears could see this as a sign the momentum may be shifting following the two month price rally.

However, bulls could argue that the level will break eventually if it keeps being tested. Also, we have seen record open interest in CME Group’s bitcoin options which indicates bullish sentiment from institutional investors. The price also remains above the 50, 100 and 200 day moving averages. 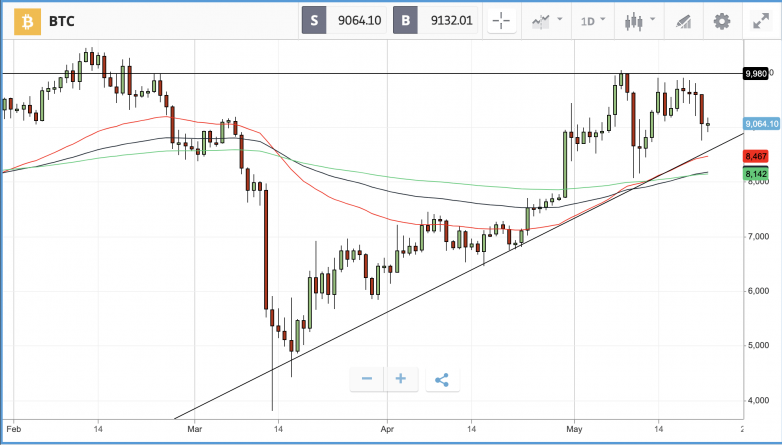 All data, figures & charts are valid as of 22/05/2020. All trading carries risk. Only risk capital you can afford to lose.