US futures were lower ahead of the first trading day of June, as volatile protests over police brutality rocked cities nationwide at the same time as authorities attempted to manage the reopening of the economy. As of Sunday, cities including Minneapolis, Atlanta, Los Angeles, New York, Seattle and many others had all been the site of protests, which have included looting, fires and shootings. The civil unrest shows no signs of abating, and tensions have been stoked by social media posts from President Trump, in which he pledged military support for local authorities and said “when the looting starts, the shooting starts” – a comment that was removed by Twitter for inciting violence. 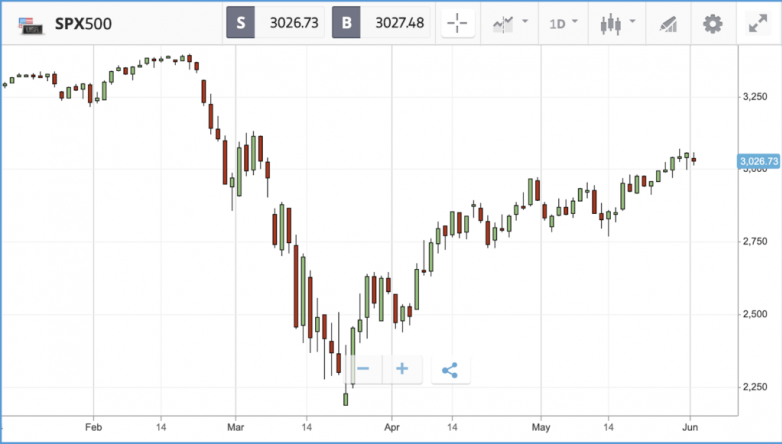 The violence is hitting investor sentiment, as it is falling in many of the USA’s major economic centres at a crucial time, when authorities are balancing lifting lockdown measures with avoiding a second wave of the pandemic. Investors now face an even more confusing picture: protests complicate reopening plans, while internationally tensions continue to rise between the US and China. On Friday, President Trump accused China of offences, ranging from espionage to ripping off “the United States like no one has ever done before.”

Asian markets presented a ray of hope for investors today amid the chaos – both Japan’s Nikkei and Hong Kong’s Hang Seng surged, despite the ongoing battle between the US and China over the latter’s sovereignty. Gold also climbed as the combination of coronavirus, US/China relations and the events across major American cities pushed up the safe haven to $1,745, its highest level for two weeks.

The S&P 500 gained 3% last week, over the four days the market was open, closing out the month with a 4.5% plus gain overall. There were signs of a turning point for value investors in the latter half of the month after a painful 2020 so far, as the Russell 1000 Value Index beat the Russell 1000 Growth Index for the second week in a row. With Q1 earnings season winding down, investors can now toll the damage corporate America has suffered so far at the hands of the economic lockdown. According to investment firm John Hancock, Q1 earnings for S&P 500 companies fell almost 15% versus Q1 2019. In economic data, it was reported on Friday that US consumer spending fell by a record 13.6% in April, although personal income increased 10.5% versus March as stimulus measures kicked into gear. In April, spending on cars was down 30% versus April 2019, while clothing spending fell by half. Consumer spending data will be key to watch in the months to come, as it accounts for some two-thirds of economic growth, according to financial advice firm Edward Jones, which said in a Friday note that “the economic recovery is tightly linked to financially and physically healthy consumers.” Overall, US gross domestic product is expected to shrink by 40% in Q2, versus the same quarter last year.

Mid cap stocks outpaced their large cap counterparts in the UK this week, with the FTSE 250 jumping by 3.9%, helping it close the lead the FTSE 100 has built up in 2020 so far. The FTSE 250 is now down 22.1% to the FTSE 100’s negative 19.4%. Both indices delivered gains last week despite a heavy selloff on Friday driven by concerns about US-China relations and the implications for global trade, which saw the FTSE 100 tumble 2.3%. London markets closed before President Trump’s Friday press conference on China, after which US stocks stabilised. For the FTSE 100, Friday’s loss was led by double-digit falls from Rolls Royce and cruise firm Carnival, with easyJet and International Consolidated Airlines Group each losing more than 7% apiece too. Rolls Royce stock is now down more than 60% year-to-date, driven by the devastation the pandemic has wreaked on global air travel.

Although Q1 corporate earnings season is drawing to a close, there are still some interesting names reporting this week which have been direct beneficiaries of the lockdown. Video conferencing firm Zoom and business communications platform Slack have made major gains in 2020 so far, with Slack up 55.9% and Zoom up by over 160%. Aside from recent growth, a key component of both earnings reports will be any insight into how management plans to convert the attention that their services are receiving at present into long-term growth, and retain new adopters who have been forced into using such tools by work from home orders.

There are no significant names reporting on Monday however, where all eyes will be on economic data, how civil unrest in the US interplays with the economy reopening, and tensions between the US and China.

UK housing market data: On Tuesday, May house price and April mortgage lending data will be reported in the United Kingdom, providing a window into how the housing market is holding up against the lockdown. House prices had been soaring before the pandemic hit, and investors will be watching for whether there will be a release of pent up demand as restrictions ease on estate agents and housebuilders.

The latest surge in the price of bitcoin has cemented the cryptocurrency‘s position as the top performing asset of 2020, outpacing other major assets such as gold and crude oil.

Over the past five months, the price of bitcoin has risen by almost a third despite a major crash in March that wiped more than $4,000 from its value. It is currently trading at $9,506 this morning.

In the same time period, the gold spot price has only risen by 15%, while crude oil has dropped by more than 50%.

Can the gains continue for Bitcoin? JPMorgan strategist Nikolaos Panigirtzoglou, who said in January that Bitcoin was undervalued, has now said the gap between its intrinsic and fundamental values “has effectively closed” after the halving.

All data, figures & charts are valid as of 01/06/2020. All trading carries risk. Only risk capital you can afford to lose

Most famous moments in Crypto History

How the Covid19 vaccine relates to the stock market