Zoom Video Communications reported its first quarter revenues had jumped 169% versus Q1 2019, resulting in profits of $27m, as its video conferencing app became a focal point for investors in the last three months. The company has been thrust into the spotlight by the coronavirus pandemic and the stay at home economy, with mass working from home driving demand for its services and sending the firm’s share price soaring more than 200% in 2020 so far. Yesterday, Zoom management also doubled its revenue guidance for the full year, although investors will be watching the firm’s costs closely in the coming quarters. On the company’s earnings call, management revealed that its margins had fallen over the past year, as the cost of adding cloud computing capacity to meet customer demand ate into profits. 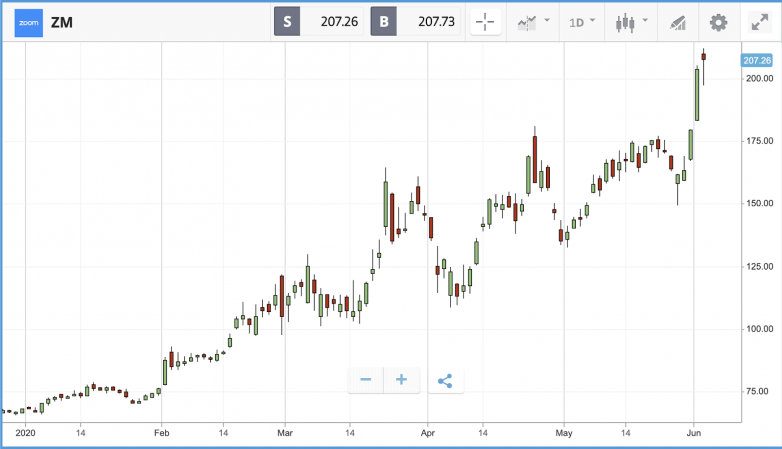 Away from the markets, mass protests over police brutality in the US continued to dominate headlines, as the civil unrest entered its eighth day yesterday. Most of the protests are peaceful but violence is escalating, with mass looting, thousands of arrests, and at least five deaths. Investors appear to be largely ignoring the protests so far, but that could change if the mass gatherings lead to a significant spike in Covid-19 cases, as the biggest risk currently facing US stocks is a second wave of the virus.

All 11 sectors of the S&P 500 were in the green on Tuesday, led by energy stocks, as oil prices made gains. The price of WTI Crude Oil increased more than 2%, closing in on $38 a barrel, while Brent Crude passed $40 a barrel. Occidental Petroleum’s share price gained 6.8% after cutting its dividend for the second time in four months on Friday. Among large firms, Occidental remains one of the hardest hit stocks in the energy sector and is now down 64.2% year-to-date. Exxon Mobil also made gains yesterday, closing more than 2% higher.

Casino giants Las Vegas Sands Corp and Wynn Resorts were close to the back of the S&P 500 on Tuesday, both finishing more than 2.5% lower, ahead of Las Vegas casinos being reopened later this week.

UK indices gain despite quarter of country’s workforce being furloughed

The FTSE 100 and FTSE 250 indices both gained 0.9% on Tuesday, despite it being reported that more than a quarter of the workforce is now furloughed, being supported by the government’s grant scheme.

In corporate news, EasyJet announced that it plans to begin operating flights again across most of its routes this summer, while British Airways asked thousands of employees to take hefty pay cuts or face losing their jobs. The FTSE 100 was led by aerospace firm Meggitt, property development company British Land and turnaround specialist Melrose Industries. BP and Royal Dutch Shell stock also made gains on the back of rising oil prices, closing 5.7% and 3.4% higher respectively. The FTSE 250 was led by similar names to yesterday, with property development company Hammerson jumping by 34.4%, Airtel Africa climbing 15.5% and manufacturer Senior plc closing 10.6% higher.

Campbell Soup: Campbell’s Soup has been one beneficiary of the pandemic, as investors rushed to stock up on canned goods and other cupboard staples. The firm’s share price is up 5.2% year-to-date, and 36.5% over the past 12 months. Investors will be watching for growth in the company’s snacks business, and details on how any recent sales boost have translated into profits. Campbell’s reports quarterly earnings on Wednesday, where analysts are anticipating an earnings per share figure of $0.57, down from the $0.75 they were predicting three months ago. Currently three Wall Street analysts rate the stock as a buy, 13 as a hold, and four as an underweight or sell.

Guidewire Software: Guidewire produces software for insurance companies, and demand for its cloud-based solutions is expected to be a driving factor behind its quarterly earnings report on Wednesday. The firm’s share price is down 2.7% year-to-date, after gaining 16.5% over the past month. Analysts are anticipating a slight loss for the quarter being reported, with a -$0.05 earnings per share figure, although that is expected to rebound to $0.52 in the following quarter. Currently, six analysts rate the stock as a buy, seven as a hold, and one as a sell.

ADP employment report: On Wednesday, ADP – a major provider of payroll management software in the US – will release its employment report for May. The report will provide a look into the health of the private sector job market, with economists anticipating nine million job losses to be reported, following a record 20 million in April. ADP’s report precedes the Bureau of Labor Statistics’ job report on Friday.

From this week Canadian firms operating with cryptoassets like Bitcoin will now be legally recognized as Money Service Businesses.

Canadian crypto exchanges must now report all transactions exceeding 10,000 Canadian dollars ($7,403), and register and comply with the Financial Transactions and Reports Analysis Centre of Canada (FINTRAC), according to reports.

The law change is a step forward in moving Bitcoin and other cryptoassets to the centre of the financial system by regulating them as equals to other currencies, such as the Canadian dollar.

All data, figures & charts are valid as of 03/06/2020. All trading carries risk. Only risk capital you can afford to lose

Support for MT 5 on 32bit Windows OS will be discontinued

Changes in debiting and crediting procedure for CDF swaps

FBS Awarded as the Best Forex Broker in Thailand