Oil gets a boost ahead of OPEC summit tomorrow

We have seen a strong European open this morning buoyed by continued resurgence from airline stocks as well as oil majors getting a boost ahead of the greatly anticipated OPEC meeting, which will take place tomorrow. Saudi Arabia and Russia both back extending production cuts as the market recovers from a supply glut on top of the slashing of demand as a result of global lockdown measures. There have been concerns with the level of compliance by some countries with regard to the production limits, and any extension to cuts could be in name only if they continue to be flouted. US crude is up 1% this morning at just under $38 a barrel. UK listed oil heavyweights BP and Royal Dutch Shell are up over 4% each. 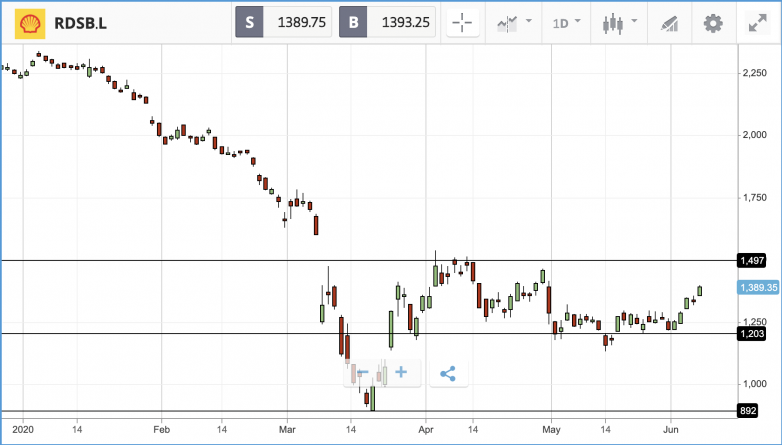 Across the pond, once again mass protests across the US dominated headlines, with President Trump taking further criticism for his response to the unrest, including from members of his own party. On Thursday Trump threatened to attempt to unseat Republican senator Lisa Murkowski, after she threw her support behind criticism levelled at the President by former defence secretary Jim Mattis. Significantly for investors, this round of criticism seems to be taking a genuine toll on Trump’s reelection hopes in November, although a Biden White House is unlikely to lead to the wholesale change for corporate America that Sanders or Warren would have meant. Polls from Fox News, typically a Trump ally, show Biden now leading in key states, including Arizona, Ohio and Wisconsin. The last Democratic presidential candidate to win Arizona was in 1996. Biden is also within the margin of error in Texas, which hasn’t gone Democrat in a presidential election since 1976.

One of the more interesting pieces of corporate news on Thursday was Slack’s earnings figures, which disappointed versus sky high expectations, sending its share price down more than 15% in late trading – after a 4.9% fall during regular market hours. The fall came despite Slack announcing a partnership with Amazon to roll out its service to all employees of the e-commerce giant, and a 50% year-over-year revenue increase. The 50% figure was in line with the annualized growth number Slack posted last quarter; and didn’t match up to the blockbuster figures delivered by video-calling platform Zoom – another firm viewed as a beneficiary of mass working from home – earlier in the week. Of the three major US stock indices, the Dow Jones Industrial Average was the only one to eke out a gain, while eight of the S&P 500’s 11 sectors were in the red. Financials stocks were a bright spot, climbing 2% overall, while utilities names fell hardest. Airline stocks were by far the biggest winners of the day, with American Airlines jumping 41.1%, United Airlines 16.2% and Delta Air Lines 13.7%. The trio, along with others, were buoyed by American Airlines announcing it is increasing capacity again, which investors took as a signal that the worst is over for airlines.

While stocks fell overall on Thursday, with the FTSE 100 down 0.6% and the FTSE 250 0.4% lower, airline stocks enjoyed a positive day – although nowhere close to the daily gains posted by US airlines. International Consolidated Airlines Group (IAG) was 3.2% up, and easyJet climbed 6.2%. Despite IAG getting into a row with the government over plans to quarantine travellers for 14 days when they enter the UK, investors were given confidence by Virgin Atlantic announcing it plans to resume passenger flights from the UK in July. This week, easyJet also said it plans to restart flights in July, between the UK and Europe. The bottom of the FTSE 100 was peppered with asset managers and utilities stocks, with Intermediate Capital Group down 7.6%, Pennon Group down 5% and Schroders down 3.3%. Bringing up the back of the FTSE 250 were property developer Hammerson, media company Future and travel firm Trainline, which fell 13.7%, 5.1% and 5.1% respectively.

US jobs report: On Friday the Labor Department in the US will release its May jobs report, which includes data on non-farm payrolls, the unemployment rate, and average hourly earnings. The report captures the period ending on the 12th of the month, so will not reflect the start of moves to reopen the economy across the US in the latter stages of May. Economists are expecting the unemployment rate to climb to 19.5% from 14.7% in April, with eight million jobs lost from nonfarm payrolls, versus the 20.5 million lost in April. The report will be closely watched, especially the headline unemployment rate. There is a risk the headline figure will top 20%, something that hasn’t happened since the Great Depression almost a century ago.

UK-EU negotiations: Officials from the UK and European Union have been ongoing this week, but have reportedly made little progress, with sticking points, including access to fishing waters and aligning business regulations, according to the Financial Times. On Friday, chief EU negotiator Michael Barnier is expected to give his verdict on this round of talks, after cautioning last month that a stalemate was looming. These talks precede Prime Minister Boris Johnson sitting down with the European Commission and EU Council presidents later this month, with an end of year deadline looming.

The lockdown imposed due to the COVID-19 pandemic has caused a spike in Bitcoin trading across several major platforms in Russia, according to a report in the International Business Times.

Several Russian cryptoasset exchanges like Binance Russia, Garantex and EXMO told Russian news sites there was a significant increase in user registrations and activity between March and May 2020. EXMO, for example, reported an increase of 15-20% activity on the exchange.

Apart from higher user registrations, the reports also said there was an increase in Bitcoin Futures trading. Binance Russia said user registrations in the last two months were double that of March, and five times the numbers it registered in January.

All data, figures & charts are valid as of 05/06/2020. All trading carries risk. Only risk capital you can afford to lose.