Fed not expecting to raise rates until end of 2022

Investors eyeing whether some recent pieces of promising economic data might cause the Federal Reserve to accelerate a return to interest rate increases got their answer on Wednesday, when Fed officials said they expect to keep rates near to zero until at least the end of 2022. The Fed also reported its first set of economic projections in six months, predicting that the US economy will contract by 6.5% this year, and unemployment falling back to 9.3%. Chairman Jerome Powell said that “we’re not even thinking about thinking about raising rates,” indicating that the central bank sees a long battle ahead to tackle the economic fallout from the pandemic. The Federal funds rate entered the year at around 1.5%, and was taken down to near zero in two cuts made in short succession during March. Yesterday, Powell said that the Fed is “strongly committed” to using all of the tools at its disposal to provide economic stability and relief, and played down last week’s figures that showed 2.5 million jobs were unexpectedly added to the economy in May.

The tone of the update has seemingly quashed hopes of a quick recovery as the projections say that even with a bounce back to 5% growth next year, the US economy will enter 2022 in worse shape than it started 2020. Markets have reacted accordingly this morning, European bourses down as much as 3% in the case of Germany’s Dax and Dow futures pointing towards a negative open to the tune of 2%. 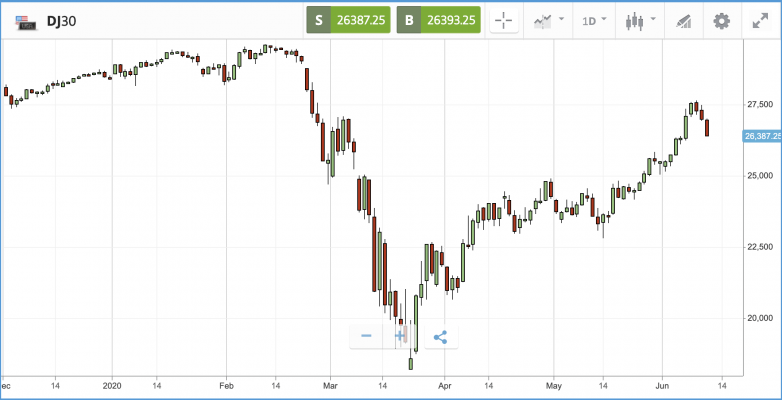 Tesla is now the most valuable carmaker in the world

On Wednesday, the Nasdaq Composite was once again the only one of the three major US stock indices to deliver a positive return, climbing 0.7% while the S&P 500 sank by 0.5% and the Dow Jones Industrial Average fell 1%. A strong day for Tesla helped the Nasdaq higher, with the electric carmaker closing the day up 9%, taking the firm’s share price past $1,000 for the first time in its history. The gain means that Tesla is now the most valuable carmaker in the world, having surpassed Toyota. Tesla’s share price jumped despite news that at least half a dozen Tesla employees have tested positive for Covid-19 in California since CEO Elon Musk reopened a facility there last month — initially going against guidelines from local officials.

Following a sharp sell-off yesterday, London-listed stock indices continued falling on Wednesday after the OECD warned that the UK is likely to be the major economy hardest hit by the pandemic. The OECD anticipates the UK economy will sink by 11.5% in 2020, worse than contractions anticipated in countries including Germany, France and Spain, due to the service-based nature of the UK economy.

The FTSE 100 closed 0.1% down on Wednesday, with the FTSE 250 falling back by 0.8%. Online takeaway service Just Eat was the worst FTSE 100 stock on the day, closing 13.1% lower after announcing it is acquiring US-based GrubHub in an all-stock deal, which will bring with it a major presence in the American market. Cruise firm Carnival and International Consolidated Airlines Group were two other big FTSE fallers, losing 9.8% and 7.4% apiece. In the FTSE 250, airline TUI, PPHE Hotel Group and outsourcing firm Capita fell furthest, with all three closing the day more than 7% lower.

Adobe: Driven by optimism around demand for its cloud-based services, and the security of its subscription-based earnings, Adobe’s share price is up more than 20% year-to-date and close to 50% over the past 12 months. The firm reports its latest set of quarterly earnings today, where investors will be watching for revenue growth to justify the share price valuation. Earnings reports have been hit and miss for the mainly tech stocks that investors have piled into in anticipation of increased demand driven by the pandemic, and even when firms have beaten expectations, the immediate reaction in some cases has still been a share price pullback. Analysts expect Adobe to report an earnings per share figure of $2.32, in line with expectations three months ago. Currently, 18 analysts rate the stock as a buy or overweight, eight as a hold, and one as an underweight.

Lululemon: High end athleisure wear retailer Lululemon has been an unexpected beneficiary of the pandemic, with its share price soaring by 40% year-to-date, benefiting from loyal customers, a strong online presence and consumers turning to casual clothing options while stuck at home. Investors are also optimistic that the firm will bounce back strongly from store closures, and return to its multi-year winning streak. Analysts are still expecting a dire quarter earnings wise when Lululemon reports earnings today, with a $0.23 earnings per share figure predicted, versus the $0.86 predicted for the quarter three months ago. Price targets on the firm’s share price range from $175 to $378, versus its Wednesday close of $323.25.

UK GDP: On Friday, UK GDP figures for April will be reported by the Office for National Statistics, economists are anticipating GDP to be close to 20% lower than the same month last year. The National Institute of Economic and Social Research will also publish its monthly GDP tracker for May, and investors will also get a look at April’s balance of trade figures, as well as manufacturing and industrial product for April.

Software giant Microsoft launched the beta version of its decentralised ID tool ION on Wednesday, in conjunction with the Decentralized Identity Foundation. The tool was first announced last year and uses Bitcoin blockchain technology as the basis for its privacy, Coindesk reports.

The tool is designed to give users and companies control over important data such as login details instead of giving system providers (such as services like Facebook) control over that login information. Bitcoin miners will receive a fee for recording reference numbers by whoever is “anchoring” the data (i.e. the end user).

The tool has potential applications relating to the coronavirus crisis too, as contact tracing apps and so-called “immunity passports” are discussed by governments and major companies such as Apple and Google, with significant security and privacy concerns arising over the use of personal medical data.

All data, figures & charts are valid as of 11/06/2020. All trading carries risk. Only risk capital you can afford to lose.