Stock markets give up weeks of gains in major selloff

After powering higher in recent weeks, stock markets fell backwards on Thursday, with the S&P 500 down 5.9% and the FTSE 100 ending the day 4% lower. Investors had been plowing money back into the markets in hopes that the phased reopening of the US and other major economies meant that the worst of the pandemic is over. However, news of rising coronavirus cases in around half of all US states, especially in those that relaxed restrictions quickly, appeared to spook investors on Thursday. In Arizona, for instance, stay at home orders ended in mid-May, with no requirement for people to wear masks and minimal contact tracing efforts, according to the Associated Press. There, from less than 400 new cases a day when the shutdown was lifted, new daily cases shot past the 1,000 a day mark in the weeks that followed. 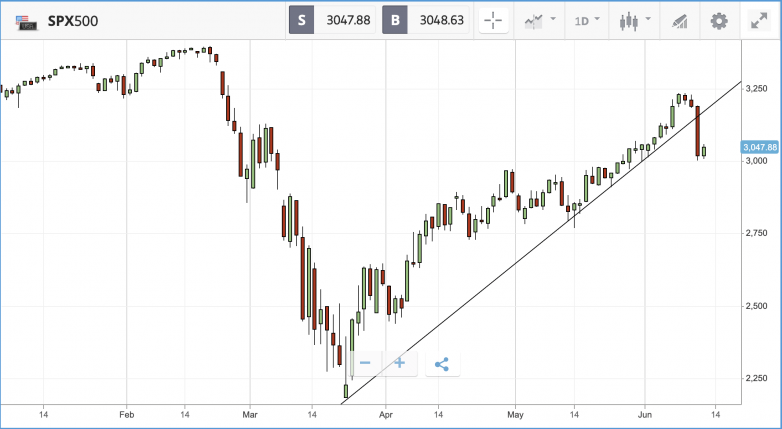 A major second wave of the virus that forces large chunks of the US back into lockdown is the biggest risk that exists for stock markets right now. Recent share price gains have been almost entirely based on hopes of reopening bringing back some form of normality in terms of consumer activity, and anything that threatens that is likely to be met with a sharp response.

US futures are signalling a positive open with all 3 indices up a touch over 1%. However, this is just a fraction of what they gave up yesterday. The fears of a second major sell off remain very real should there continue to be a resurgence in infections.

Of the three major stock indices, the Dow Jones Industrial Average was hit hardest on Thursday, sinking 6.9%, with all 30 of its constituent stocks in the red. Boeing was the biggest drag, and the only double digit faller, closing the day 16.4% lower. The share price of the airline manufacturer is still up 39% over the past month, but is back down close to 50% year-to-date again. Sector wise, in the S&P 500, energy and financial stocks were the two hardest hit, sinking 9.5% and 8.2% respectively. Both energy and financial stocks, among the hardest hit sectors in 2020, were making up ground on the broader market in recent weeks but the performance gap has now widened back out again. Financial stocks are down 25.2% year-to-date overall, versus negative 7.2% for the S&P 500.

Just one stock, supermarket firm Kroger, delivered a positive day on Thursday, while nine companies saw their share prices fall by more than 15%. It was many of the usual suspects from the initial bear market that reared their heads, with Norwegian Cruise Lines, Occidental Petroleum and United Airlines all in that group of nine.

Stark warning on state of UK businesses as FTSE 100 falls

Early on Friday morning, ahead of market opening, the Office for National Statistics in the UK issued some of the most stark data of the crisis so far, recording a 20.4% dip in UK GDP in April. Ahead of the data, the FTSE 100 fell by 4% on Thursday, while the FTSE 250 fell 3.6%. In addition to the broader sell off, driven by second wave fears in the US, investors were issued a stark warning Confederation of British Industry director general Carolyn Fairbairn on Thursday. The trade body, which represents close to 200,000 companies, warned that businesses would not be able to withstand another shock, either from a second virus wave or Brexit. She added that companies have been so preoccupied with the pandemic, that they have “not had a moment to plan for a no deal Brexit at the end of the year.”

Similar to the US, travel and financial names dragged the FTSE 100 lower, with cruise firm Carnival closing down 12.1%, Royal Bank of Scotland 8.7% lower and easyJet losing 7.1%. In the FTSE 250, Cineworld Group, Aston Martin Lagonda and manufacturer Senior plc fell furthest, closing out Thursday 17.1%, 15.2% and 11.5% down respectively.

June consumer sentiment: On Friday, the Michigan Consumer Sentiment Survey will be released in the US, with economists anticipating that the index will tick up to 75 for the month, from 72.5 in May. Remember, the figure being reported does not include the impact of yesterday’s market selloff, when fears of a second virus wave hit home with investors. The US is a heavily consumer driven economy, and the figure will be watched closely, as ultimately it is the translation of economic reopenings to a resurgence in normal consumer behaviour that has got investors excited over the past month.

Import and export data: Also being reported on Friday are the latest US import and export numbers. The import and export price indices measure changes in the prices of goods and services coming in and out of the US. They have been of significant interest in recent history given the USA’s turbulent relations with some of its major trading partners – in particular China.

The world’s three major cryptoassets, Bitcoin, Ethereum and XRP failed to stave off the wider stock market sell off on Friday. Bitcoin fell sharply, coming close to $9,000 before recovering somewhat to trade around $9300 early on this morning. Similarly, Ethereum was down over 5%, reaching a low of $225 and is now trading around $233. XRP was down by nearly 5% too and is trading around $0.19 this morning.

Elsewhere the US Congress is mulling the idea of creating digital dollars to help the unbanked in America. It laid plans, according to Decrypt, for the Federal Reserve to provide bank accounts to those whom the banking industry does not. So-called “FEDaccounts” would operate through US Post Offices. Meanwhile former chairman of the US Commodities and Futures Trading Commission Chris Giancarlo recommended a form of Central Bank Digital Currency at a Congressional hearing.

All data, figures & charts are valid as of 12/06/2020. All trading carries risk. Only risk capital you can afford to lose.

A year after meeting Warren Buffett The value of time