Stock markets slide as infection rates in China and US spike

Markets in Asia sold off overnight and the US was poised to open lower later today as fears of a second wave of infections from coronavirus mount. Overnight Japan’s Nikkei slid 3.5%, while Hong Kong’s Hang Seng was off 2.1%, as investors fretted about the implications of rising numbers of cases of the global pandemic. US stock futures also fell sharply with the Dow Jones indicating a near 3% drop, suggesting that investors may be in for another rocky week.

Headlines over the weekend were dominated by record numbers of new cases and hospitalisations in several US states. Arizona, Arkansas, California, Florida and more all reported record numbers of new cases, while Texas, Utah and others suffered a record number of hospitalisations. Governors are all handling the reopening of their states differently, with mixed results. In New York, Governor Andrew Cuomo said that the state has received 25,000 complaints about violations of social distancing and other guidelines and warned reopening in some areas could be rolled back. 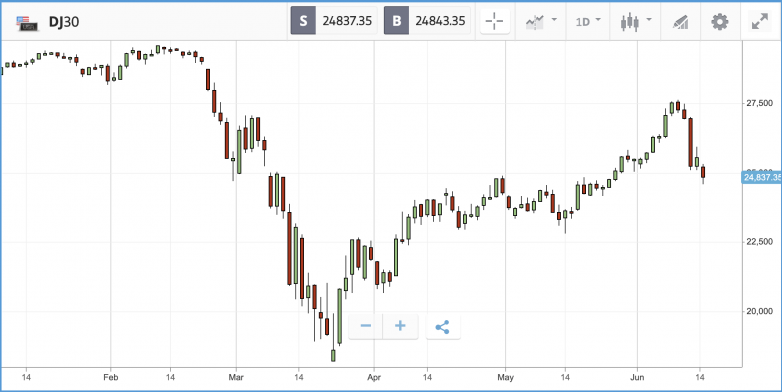 In China, where the pandemic started, there were almost 80 new coronavirus infections recorded in Beijing over the weekend. Until the latest outbreak, the city had gone more than 50 days without a new case.

It follows a turbulent week in stock markets worldwide, with the S&P 500 closing last week just shy of 5% lower, with most of that loss coming during a sharp drop on Thursday.

Of the three major US stock indices, it was the Nasdaq Composite that held up best last week, closing 2.3% lower, versus 4.8% for the S&P 500 and 5.6% for the Dow Jones Industrial Average. The week’s market moves gave a view into the sectors where share prices are most at risk of continued second wave fears. Of the 11 sectors in the S&P 500, the energy, financial and industrial sectors fell hardest, at 11%, 9.3% and 8% respectively.

Financial advice firm Edward Jones noted on Friday that the small rebound markets posted on Friday separated Thursday’s sell-off from the major daily losses of February and March, “reflecting a better balance of optimism and caution.” The firm’s analysts predicted that the recovery will be peppered with periodic disappointments, adding that “the early stages of bear market recoveries are more akin to a toddler learning to walk than an Olympic runner.” In its own Friday note, investment firm T. Rowe Price highlighted that there was no clear single catalyst that sparked Thursday’s selloff, which has led to speculation that profit-taking from the recent rally may have been at work.

Over the weekend, following a week in which the FTSE 100 fell by just shy of 6% and it was revealed that the UK economy shrank by 20.4% in April, Bank of England governor Andrew Bailey said that the central bank is “ready to take action”. Bailey said that the record plunge in the economy was in line with expectations, and while he noted that there are signs of the economy coming back to life, he warned that “we are still very much in the midst of this”. By comparison, during the Global Financial Crisis of 2008 and 2009, UK GDP never shrank by more than 1% in a single month. Today will bring another round of reopenings, when shops in England selling “non-essential” goods such as clothes and electronics will be allowed to begin trading again.

On Friday, the FTSE 100 made back a small portion of its 4% Thursday loss, with the bounce back led by education publisher Pearson and outsourcing firm Centrica, along with a mixture of travel and financial names.

UK unemployment data: On Tuesday, the April unemployment rate and average earnings figures will be released in the UK, where economic data tends to come through around a month behind the US. The May unemployment claimant count will also be reported, where economists are anticipating that the figures will show an additional 850,000 claimants in May. Bear in mind, that the UK government’s widely used job retention scheme is currently acting as a dam, preventing layoffs that may ultimately still happen from feeding through into employment figures — as employers using the scheme can’t let staff go while they are receiving the support.

Brexit talks: UK Prime Minister Boris Johnson will be holding a meeting with European Union leaders today after several rounds of discussion that have left negotiations at a stalemate. Johnson is expected to demand more rapid progress, as British negotiators have been accusing European officials of dragging their feet. If a deal is not struck, the UK and EU will find themselves trading based on World Trade Organisation terms from January 1, meaning tariffs on goods.

Ashtead Group: London-listed industrial equipment rental firm Ashtead, which is seen as a bellwether of industrial activity, reports its latest set of quarterly earnings on Tuesday. The firm’s share price is down just 2.2% year-to-date, well ahead of the broader market, following a near 30% rebound over the past three months. Currently, analysts are almost evenly split between a buy and hold rating on the stock.

Recovery hangs on a knife edge

As lockdowns come to an end in nations around the world, economic and market recovery hangs on a knife edge. Thursday’s sell-off serves as a warning to investors as to just how quickly sentiment and share prices can snowball on concerns about a second wave of the coronavirus and a return to stricter lockdowns. That probability is increasing in the US, as the rapid loosening of restrictions in certain states and breaches of phased reopening guidelines are leading to surges in cases. The ending of lockdowns was always going to be a delicate balancing act between public health and economic harm, but any consensus that builds around the idea that reopening has happened too soon will likely prove damaging to share prices.

Crypto corner: Survey shows over a third of institutions have crypto exposure in US and Europe

Cryptoassets are held by more than a third of institutional investors in the US and Europe, a survey has shown.

According to a report from Fidelity Investments, 36% of some 774 surveyed family offices, pensions and funds have some sort of exposure to cryptoassets – whether that be through spot holdings or derivatives.

Bitcoin is the most popular holding, with 25% of those surveyed stating they have long-exposure to BTC, whereas 11% have exposure to Ethereum.

Nonetheless, both major cryptoassets were in the doldrums this morning in early trading amid a general risk-off trade in markets. Bitcoin was down 3.4% at $8,982, while Ethereum was off over 5% at $218. Ethereum has taken the brunt of heavy selling in the last few days, the price falling 10% in the last five days.

All data, figures & charts are valid as of 15/06/2020. All trading carries risk. Only risk capital you can afford to lose.

RoboMarkets changes to schedule in view of Juneteenth Holiday

RoboForex changes to schedule in view of Juneteenth Holiday