Markets continue to bounce, US retail sales jump 18 in May

Stock markets in the US, UK and Europe jumped yesterday and this morning on several pieces of news. First up, retail sales in the US mounted a comeback in May, jumping by 17.7% in their biggest monthly increase ever. The figure was more than double the 8% increase that was forecasted, although total sales are still off 6.1% versus May last year. Category wise, clothing and accessories stores reported a 188% jump versus March, while sporting goods, hobby and book stores posted an 88.2% gain. Food and drink establishments enjoyed a 29.1% bounce back after states began to allow outside dining rather than just pickup and delivery. In addition to the retail sales figures, there were reports on Tuesday that the Trump administration is working on a trillion dollar infrastructure spending package as part of the broader response to helping the economy through the current pandemic. One counterpoint to investor optimism on Tuesday was testimony to the Senate Banking Committee from Federal Reserve chairman Jerome Powell, who noted signs of economic stabilisation, but warned that a full recovery is unlikely until the disease is contained. He added that the unemployment rate is still exceptionally high, and that millions are employed by state and local governments that are facing financial difficulties.

The Dow Jones Industrial Average closed out Tuesday 2% higher, followed by a 1.9% gain for the S&P 500 and 1.8% for the Nasdaq Composite. The Dow was led by industrial machinery maker Caterpillar, pharma giant Merck and Boeing, which finished the day 5.3%, 4% and 3.6% higher respectively. In the S&P 500, retailers led the charge, although the index was topped by a 15.6% gain for pharmaceutical firm Eli Lilly, after the firm announced positive clinical trial results from phase three trials of a new breast cancer drug. The drug, Verzenio, is hoped to be a major step forward in treating breast cancer. Eli Lilly is also in a phase three trial of a drug to treat Covid-19 and has other treatments in earlier stages of development. 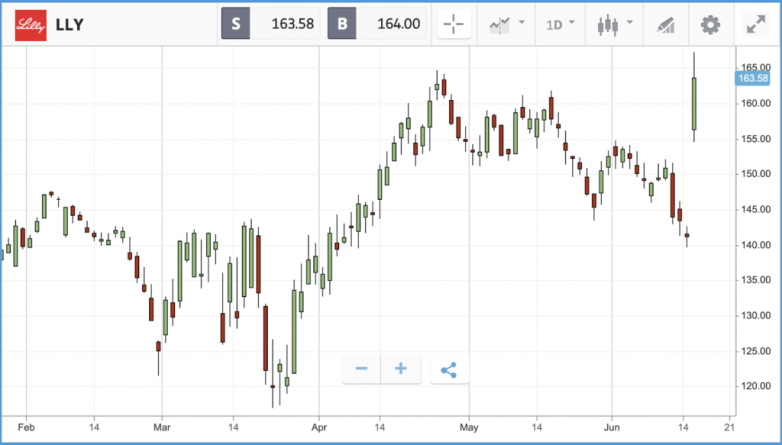 In earnings news, Oracle was the main company reporting on Tuesday, delivering an update that disappointed investors. The company’s share price sank by more than 3% in extended trading, after reporting revenue was down 6% versus the same quarter last year. CEO Safra Catz noted on the analyst call that there was a “drop-off in deals” during the quarter but “many of these discussions have already resumed … since these were not lost to competitors, we believe that most of this business will ultimately be booked.”

On Tuesday, unemployment data showed that the number of workers on UK payrolls fell by more than 600,000 between March and May, with the number of people claiming work-related benefits was up 126% to 2.8 million. Once again, the government’s wage support program kept the official unemployment rate relatively low, at 3.9%. Nonetheless, UK markets rose alongside their US counterparts, with the FTSE 100 finishing 2.9% higher on Tuesday. The index was led by 5% plus gains from names including Barclays, Just Eat Takeaway and plumbing products distributor Ferguson. Overall, only three firms out of the 100 in the index had a negative Tuesday, with two of those down less than 1%. Despite the progress, the FTSE 100 remains down 17.2% year-to-date, still lagging well behind its US counterparts. In the FTSE 250, which closed out the day 2.2% higher, property developer Hammerson topped the table, with its share price closing 10% up.

National Grid: Compared to the wider market of London-listed stocks, it has been smooth sailing for National Grid in 2020 so far. The firm’s share price is close to breakeven for the year, and has essentially been flat for months. National Grid reports its latest set of quarterly earnings on Thursday. Currently, analysts are split between a hold and buy rating on the stock, which offers a dividend yield of more than 5%.

Bank of England interest rate decision: On Thursday, the Bank of England will announce its latest decision on interest rates and investors will also get a look at the Monetary Policy Committee’s meeting minutes. Expectations are for the rate to remain where it is now, at 0.1%, but investors will also be watching for plans to extend the central bank’s quantitative easy program.

The total number of Bitcoin ATMs has now passed 8,000 worldwide, according to monitoring resource CoinATMRadar, after a surge this year.

In total there are 8,208 ATMs in 73 countries allowing users to buy and sell Bitcoin (BTC) and altcoins for cash. The number of Bitcoin ATMs has risen 17% since March when it was reported by Cointelegraph that there were more than 7,000 in operation.

While there are now ATMs dispensing Bitcoin across the world including in the UK, Switzerland, Austria, and Spain, the majority are in the US which boasts 6,000 in total.

As distribution hubs for cryptoassets increase, the price is also on the rise this week. Bitcoin was up at $9,479 this morning, while Ethereum is also off recent lows, trading at $232.

All data, figures & charts are valid as of 17/06/2020. All trading carries risk. Only risk capital you can afford to lose