It has been a fairly muted European open today with the FTSE creeping up just under half a percent and Germany’s Dax trading slightly softer, down 0.3%

This comes after markets around the globe rallied following news that US regulators had relaxed rules preventing banks investing in hedge funds or private equity funds. The end of the prohibition, which was part of the Volcker rules, is expected to release up to $40bn in capital for lenders and helped to counter negative news on the coronavirus.

Yesterday it was announced that Texas, one of the states at the forefront of reopening plans, was putting its economy back on hold after a nationwide surge in infections.

Nonetheless, the news from the regulators helped boost the banks and sent the S&P 500 up 1.1% to 3,083 points, with futures markets also pointing to minor gains when Wall Street begins trading later today.

Asian markets took their lead from the US, shrugging off a report from S&P Global Ratings that warned the Asia-Pacific economies are on course for a $3trn hit from coronavirus over the next year as they look to pay down debt.

S&P forecasts the region’s economy will shrink by 1.3% in 2020, but despite the downbeat view from S&P, Asian markets were firmer overnight, with Japan’s Nikkei up 1.3% and the Shanghai Composite up 0.3%.

Elsewhere, oil prices continued to rally, with Brent crude up over 1% to nearly $42 a barrel, while gold was steady around the $1,762 mark despite the rebound in equity markets. 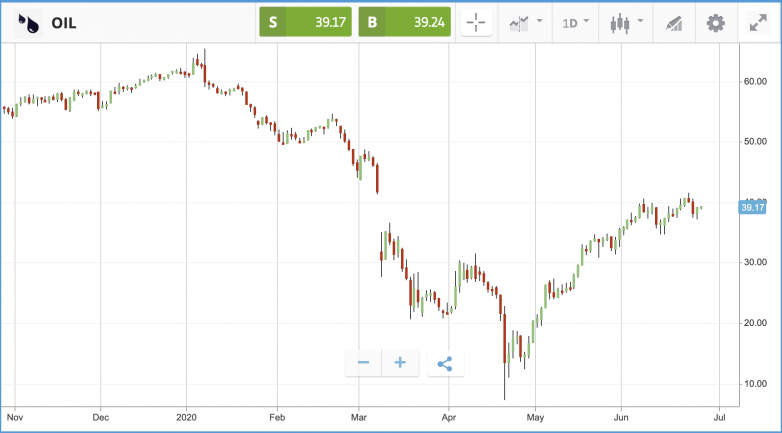 The S&P 500 banks sub-index led the gainers for the session yesterday after the US banking regulators eased rules and investors waited for results of the sector’s annual stress test, which helps determine dividend policies.

The bank index had fallen 19% from its recent high on June 5 to Wednesday’s lowest point, but rallied as much as 3.75% yesterday after the rule change. Stocks including JP Morgan, Bank of America and Wells Fargo closed up between 3.5% and 4.8% on the news, although some of this was given back after hours as the US Federal Reserve revealed the results of its bank stress test post market close and imposed restrictions on their activities.

The Fed said Covid-19 could trigger $700bn of loan losses in a worst case scenario, and push some lenders’ capital positions close to minimum accepted levels. In total, 33 of the country’s top lenders underwent stress tests and are now barred from share buybacks until at least Q4 this year.

UK rallies as financials come to the rescue

UK markets turned positive late yesterday to finish on a high, with financial stocks coming to the fore amid changes to the US regulatory landscape. Asset managers Schroders and Standard Life Aberdeen both closed up over 3%, while investment platforms were also in the ascendency, as investors cheered the reversal in the US. The London Stock Exchange, which owns and operates the UK’s leading markets, also gained 2.2% after it appointed Anna Manz – currently chief financial officer of Johnson Matthey – as its new CFO. On the downside United Utilities tumbled 4.5% as the stock went ex-dividend, the point where the shares will no longer qualify for the coming dividend payout. Rightmove also sold off sharply, down 4.2%, after analysts at Berenberg cut their rating from hold to sell and slashed their price target to 385p.

Sainsburys: Next week investors will get to see how Sainsburys has benefited — or otherwise — from the switch to stay at home in the UK. The company is one of the few which has been able to continue to operate amid the pandemic but, like rival Tesco, analysts will be watching to see if the increased business it has been doing will be offset by rising costs. Currently analysts favour the stock, with eight rating it as a strong buy or a buy, versus just three holding it as a sell.

On the Beach: UK-based holiday firm On the Beach, which reports its interims on Tuesday, has had a rough time year-to-date, with shares down around 40% amid the onset of the coronavirus pandemic. The stock has been downgraded by one analyst in the last few weeks, despite raising some GBP67.3m to help weather the coronavirus storm. Nonetheless, according to ShareCast, brokers are still overwhelmingly positive, with seven buy ratings and one hold.

FC Barcelona fans have invested over $1.3m in tokens issued by the club which gives them the chance to vote on how it is run.

Known as Barca Fan Tokens, more than 600,000 tokens were sold at $2 each in just two hours earlier this week, according to Coindesk.

First announced back in February, the token is designed to help promote fan engagement, and can be used to purchase merchandise and various club experiences.

All data, figures & charts are valid as of 26/06/2020. All trading carries risk. Only risk capital you can afford to lose.