US stocks have retreated sharply, snapping the recent winning streak, as markets reacted to renewed fears over a second wave of infections in the US. Significant areas of disease emerged around the country with Arizona, California and Texas all reporting a daily record number of infections and many states stating that they were halting any re-opening of their economies. 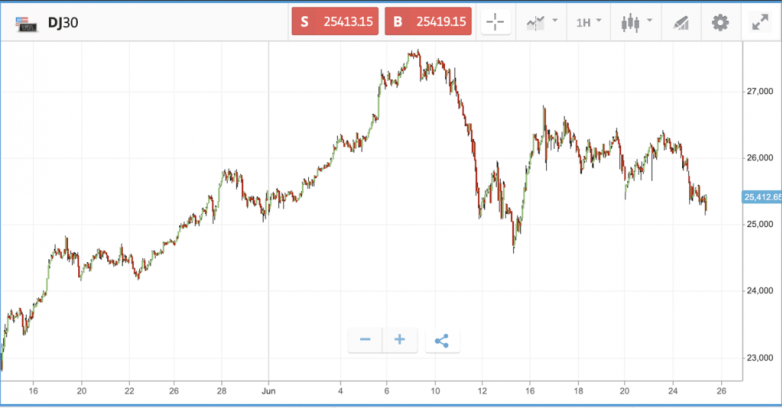 The new data has spooked investors concerned about a second wave of infections. Even without the intervention of governors and authorities in so-called red states where Republicans — typically more hawkish about lockdowns — are in charge, increased infection rates could lead to businesses postponing reopening. Apple announced it was closing its stores in Houston, Texas for example amid growing infections there, while Walt Disney Co. delayed the opening of its Disneyland resort in California.

With so much uncertainty, companies have been shoring up balance sheets to keep them afloat, especially in the most impacted sectors, such as travel and leisure.

US airlines have reportedly raised somewhere in the region of $10 billion from markets this week as they seek fresh capital to help their businesses survive the coronavirus crisis. American Airlines began the week by raising $2 billion through convertible bonds and share issuance, followed by another $2.5 billion on Wednesday through secured bonds. United Airlines is seeking to raise $5 billion by the end of the week — $3 billion in bonds and $2 billion in loans. Finally, Alaska Airlines issued $1 billion of debt yesterday backed by its fleet of 61 aircraft. The sector is stepping up capital raising measures as it seeks to staunch cash outflows while its fleet is largely grounded.

As if the virus was not enough for investors to contend with, the possibility of new trade barriers being erected between the US and EU is another major threat. The US announced yesterday that it was considering imposing tariffs on $3.1 billion worth of products from the EU, impacting nations such as France, Germany, the UK and Spain. The list of 30 items included olives, chocolate, blue cheeses and malt beer. The US said it could implement tariffs of up to 100% on such products. The dispute originates from a fight between the US and EU over subsidies for airline manufacturers, dating back to 2004.

US markets go into reverse on second wave fears

The major US stock indices all retreated yesterday thanks to increased fears over a second wave of coronavirus. The Dow Jones fell hardest on the day, down 2.7%, while the S&P 500 was down 2.6%, led lower by companies that stand to be affected by new infections. Norwegian Cruise Line Holdings and Royal Caribbean Cruises felt the brunt of the sell-off, down 12% and 11% respectively.

Even the tech giants, many of which have made substantial gains amid the lockdown, succumbed to selling pressure yesterday as confidence vanished, with Apple and Microsoft both off 1.8% and 2% respectively.

The positive performers on the day were few and far between in the S&P 500, but included supermarket retailers Kroger, up 2% and Tractor Supply Co. which rose 1.6%, as investors looked for safety in the equity markets.

London-listed stocks suffered yesterday on the back of renewed coronavirus second wave fears. The FTSE 100 came off worse thanks to its greater international exposure, down 3.1%, while the UK focused FTSE 250 lost 2.7%. Winners and losers on the day reflected investors’ caution and anticipation of fresh restrictions, with leisure and travel stocks down and supermarket stocks rising, albeit modestly.

The FTSE 100 was led down by British Airways and Iberia airlines owner International Consolidated Airlines Group (IAG), medical equipment manufacturer Smith & Nephew and hotel and restaurant owner Whitbread, down 8.5%, 7% and 6% respectively. Just four stocks in the index of 100 went higher on Wednesday. Those were Avast, Polymetal International, Sainsburys and Ocado — up between 1.5% and 0.3%.

In the FTSE 250 the impact was similar with Crest Nicholson, the housebuilder, down 18.2% on the day after it reported GBP51 million worth of losses in the first half of the year.

Nike: Attracting a lot of attention ahead of its Q4 results today is Nike as analysts flock to offer upbeat assessments of the share price. While the company’s stock tumbled with many others during the initial coronavirus outbreak, it has largely recovered all its losses in the subsequent rally and now hovers around the $100 mark. But analysts are targeting a higher price, with one going as far as to suggest a target of $130. Analysts cited the Nike brand’s position as the best-known on the high street and its rapid recovery from the crisis as reasons for optimism, with seven currently rating the stock as overweight or buy, and only one as a neutral.

Tesco: While it looks like a natural beneficiary of the pandemic, Tesco, along with the rest of the supermarket sector, has faced challenges of its own as a result of the crisis. A sharp rise in costs of between GBP650 million and GBP1 billion, and its ability to meet and boost its online delivery service, are chief among them. It’s Q1 results tomorrow will give more detail as to how it is meeting these challenges. One advantage Tesco does have is the size of its stores, which makes social distancing easier, and helped boost its sales by 11.7% in the latest Nielsen data for supermarket stores, ahead of discounter Aldi.

The Bank for International Settlements (BIS) has called for central banks to embrace so-called Central Bank Digital Currencies or CBDCs as the future of the international monetary system. The BIS, a quasi-trade body owned by central banks, was a precursor institution to organisations such as the World Bank and IMF. While both those organisations were created in the aftermath of the Second World War, the BIS has an older heritage, born from the Great Depression of the 1930s.

The BIS in its report notes Libra, Covid-19 and a competitive field for CBDCs as proof that global sentiment for digital currencies and payment methods is growing in relevance. In particular, the report referred to Facebook’s own digital currency, Libra, as a “wake-up call” for global financial institutions.

All data, figures & charts are valid as of 25/06/2020. All trading carries risk. Only risk capital you can afford to lose

RoboMarkets changes to trading schedule 17 Jan 2022 in US

RoboForex changes to trading schedule 17 January 2022 in US