It’s been somewhat of a muted open to the quarter, with European markets mostly trading either side of flat. Most of the action happened yesterday, US stocks closed out their best quarter in over two decades, at the same time as new Covid-19 case numbers in the country passed 44,000 a day. Dr Anthony Fauci, part of the White House’s coronavirus task force, warned that figure could jump to 100,000 a day as states in the south and west of the US fail to prevent a new wave of cases. By contrast, New York — the original epicenter — appears to have a good handle on the virus.

In stocks, the S&P 500 jumped 1.5% yesterday, taking its gain over the past three months to 20%, driven by trillions of dollars in relief funding and central bank stimulus. The rally is the biggest quarterly gain posted by the index since 1998, while the Dow Jones Industrial Average delivered its best quarter since 1987. By far the best performing major stock index during the quarter, both in the US and overseas, was the technology-heavy Nasdaq Composite. The index has gained more than 30% over the past three months, propelled by major gains from companies including Amazon, Nvidia and PayPal, all of which look to be on the right side of trends accelerated by the coronavirus pandemic. 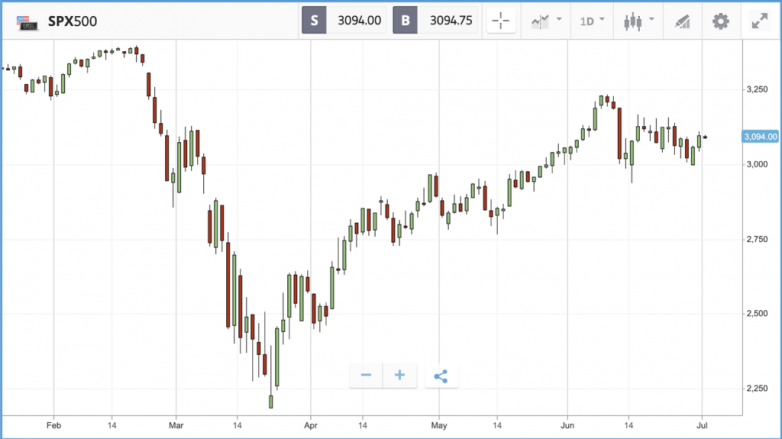 All three major US stock indices made further gains yesterday, after a Monday rally, more than recovering from Friday’s sell-off. The Nasdaq Composite was the best performer of the trio, gaining 1.9% and taking its year-to-date gain to 12.1%. Tesla was one of the biggest winners on the day, closing 7% higher, following a leaked email to staff from CEO Elon Musk. The email showed that Musk is optimistic the company can break even for the second quarter of 2020 and encouraged employees to go “all out to ensure victory.”

Sector wise, energy stocks led the S&P 500 on Tuesday, climbing 2.2% overall. Marathon Petroleum was the top individual energy stock, closing the day 5.6% higher. The energy sector still lags the broader market by a dramatic margin in 2020 so far; year-to-date it is down 37%, versus 4% for the S&P 500 overall. At the bottom of the index, Boeing was the worst performer of the day, losing 5.8% and giving up a chunk of the double-digit gains it made on Monday following news that the FAA is starting 737 Max test flights. The sell-off was triggered by news on Monday evening that Norwegian Airlines has cancelled an order for 92 of the jets.

In the UK yesterday, the FTSE 100 fell 0.9% after the Office for National Statistics revised its previous estimate of how much the UK economy shrank in the first three months of the year. Originally, the ONS had said that the contraction came in at 2% for the quarter, but it now says the figure was 2.2% — the fastest the economy has contracted since 1979.

In corporate news, EasyJet said that it has begun talks to close multiple bases, with 1,300 staff facing job losses according to the Unite union. The news came after stock markets closed in the UK. Royal Dutch Shell also made headlines on Tuesday after announcing that, following a review of its business, it is writing down up to $22bn (GBP17.8bn) of assets in the second quarter, based on changing expectations of long-term oil and gas prices. The oil giant said it anticipates Brent crude oil prices to average $35 a barrel this year, down from a previous expectation of $60. Shell anticipates an average price of $40 in 2021, and $50 in 2022. The company’s London-listed shares sank 3.9% following the news.

General Mills: General Mills is the firm behind brands including Cheerios, Haagen-Dazs and Betty Crocker. The company’s share price is up 15.1% year-to-date, thanks to expectations of elevated demand for household staples driven by the pandemic. The $37bn market cap firm reports its latest set of quarterly earnings today. On the company’s earnings call, analysts are likely to probe for information on whether elevated demand is continuing, and what organic growth the company is generating beyond panic buying. Analysts expect the company to deliver an earnings per share figure of $1.06 for the quarter, up from the $0.96 they were anticipating three months ago.

Constellation Brands: Also reporting earnings today is Constellation Brands, the company behind alcoholic drink brands including Corona and Modelo. The picture for the company is more mixed than General Mills — while more people stuck at home has likely driven sales of beer at supermarkets, the mass closure of restaurants and bars nationwide is a major headwind. Analysts will likely be aiming to understand the balance of those two forces on the company’s earnings call. Constellation’s share price is down 7.8% year-to-date. Currently, 12 Wall Street analysts rate the stock as a 12, two as an overweight, six as a hold and one as a sell.

US economic data: A raft of interesting data points will be released in the US today. Payroll service provider ADP will release its private employment report for June, which is expected to show job additions in the private sector. Additionally, June motor vehicle sales will be reported, plus the ISM manufacturing index for June.

An estimated 2.6 million UK consumers have bought cryptoassets at some point, according to new FCA research. That is a 1.1 million increase since the FCA completed a face-to-face survey on the same topic last year.

Of the 1.9 million that still hold their cryptoassets – such as Bitcoin, Ripple or Ether – half have more than GBP260 invested. The research forms part of the FCA’s work alongside the Government and Bank of England to understand market size, consumer profiles and attitudes towards cryptoassets.

Bitcoin has near doubled from a low point earlier this year, trading at $9,100 currently. However, it remains below its previous year-to-date high of over $10,000, and well off peaks seen within the last 12 months when it topped out at $12,155.

All data, figures & charts are valid as of 01/07/2020. All trading carries risk. Only risk capital you can afford to lose.

Indicators and More FBS Trader App Got a Major Update

Up to 17 cashback with a new offer from AMarkets