Despite harrowing Covid-19 case numbers reported across large swathes of the US over the weekend, stock futures are pointing to a marginally higher open today. The rolling seven-day average for new cases in the US has reached a record high for 27 consecutive days, per The Washington Post, but some state governors are refusing to reverse reopening plans. A return to widespread lockdowns and the ensuing economic turmoil remains the single biggest risk to stock markets, but for the time being investors appear happy to keep riding recent momentum.

One stock that investors will be watching closely today is Boeing. Over the weekend, it was reported that the plane maker’s troubled 737 MAX airliner will undergo another government test to assess the safety of software fixes. The Wall Street Journal reported that the tests being conducted in the coming weeks will assess how well an average airline pilot will be able to deal with emergencies using the overhauled software. The tests, and any reports of success or failure, will be followed closely by investors. Boeing is currently stuck between a rock and a hard place, with severely reduced global air travel demand leading airlines to cancel or delay orders, and the grounding of the 737 MAX costing it billions. Any path to either of those problems being resolved will be met positively by the market. 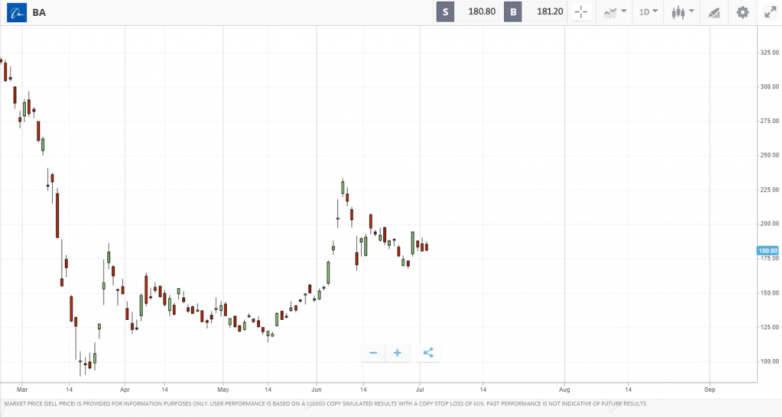 Nasdaq Composite at an all-time high

US markets were closed on Friday for the Independence Day holiday. Of the three major stock indices, the Nasdaq Composite advanced the furthest last week, gaining 4.6% and hitting a record high. The index is now up 13.8% year-to-date, helped recently by names including Netflix and Electronic Arts. In a weekly note, T. Rowe Price said that its traders did not see any clear catalyst for last week’s gains, with one theory that solid economic data helped offset surging Covid-19 case numbers. Whether those data points will continue to provide reassurance as reopening plans head into reverse remains to be seen. Analysts at John Hancock noted that in the second quarter consumer discretionary, IT and energy stocks led the way, with all three sectors generating returns of greater than 30%. By comparison, utility and consumer staples stocks lagged behind in the single digits. Charles Schwab analysts pointed to Covid-19 vaccine progress as another factor helping to drive share prices higher last week, but they noted that the major stock indices closed out the week well off their intraday highs, due to the “omnipresent uncertainty” of the recent pandemic resurgence.

FTSE 100 gives up gains to post a flat week

On Friday, the FTSE 100 fell 1.3%, giving up all of the gains it had edged out over the course of the week; most of which came on Monday and Thursday. With US markets closed, trading volume on Friday for FTSE 100 shares was down by close to 30% on the same time a week earlier. Investors also had final data on the UK services sector for June to digest, which was in line with consensus expectations showing that, while there has been a huge improvement since May, the sector is still marginally contracting.

Over the weekend, it was reported by The Guardian that Chancellor Rishi Sunak is considering plans to hand out vouchers of GBP500 for adults and GBP250 for children, which would only be eligible for spending in the hardest hit areas of the economy.

In corporate news, Rolls Royce’s share price tumbled on Friday, closing the day 10% lower. The sell-off followed an announcement from the company that it is considering fundraising options, including a share sale and disposing of some business units.

JD Sports: London-listed sports fashion retailer JD fell hard in the initial market sell-off in Q1, but has surged by 60% over the past three months, taking its year-to-date loss to 22.1%. The stock is now up 5% over the past 12 months. JD reports its latest quarterly earnings tomorrow, the demise of its Go Outdoors brand is likely to be front and center. Go Outdoors appointed Deloitte as its administrator in late June, which then oversaw the sale of the business back to JD Sports for GBP56.5 million. The brand faces challenges including inflexible lease terms on its stores, and JD reportedly hopes that a major restructure will give Go Outdoors a shot at remaining part of its portfolio in the future.

Whitbread: Premier Inn owner Whitbread, which is the UK’s largest hospitality company, also reports its latest set of quarterly earnings tomorrow, days after pubs and bars across the country were allowed to reopen. Analysts are likely to question management on how the reopening is expected to translate into revenue recovery. The company’s share price is down 42.7% year-to-date, and in early June it completed a billion pound share rights issue to raise capital. Currently, eight analysts rate the stock as a buy or outperform, 12 as a hold, and eight as an underperform or sell.

Growth stocks on track for biggest outperformance since 1999

If growth stocks maintain their current margin of outperformance versus value stocks until the end of the year, it will be the largest gap between the two since 1999, according to analysts at investment firm John Hancock. One of the features of many market bouncebacks in previous crises has been value stocks leading the way during the recovery. That was the case following the bursting of the tech bubble at the turn of the millennium, and in 2009 following the global financial crisis. This recovery seems to be different, while share prices have been bouncing back, the strong post-crisis economic growth needed to kickstart value stocks — which typically include financial and commodity companies — is not in place. One point for investors to consider carefully is that when the circumstances are right for beaten down value stocks to outperform, a lot of the gains on the table tend to come during relatively short periods of time. For reference, year-to-date the iShares Russell 1000 Value ETF is down 16%, while the iShares Russell 1000 Growth ETF is up 11.7%.

Crypto corner: Book your next holiday with Bitcoin

Travel firm Expedia has partnered with crypto travel platform Travala to open up 700,000 accommodation options around the world to payment in Bitcoin, according to Cointelegraph.

Travala will take advantage of the ‘Expedia Partner Solutions’ (EPS) which allows it to access Expedia’s rapid application programming interface. Travala struck a similar deal with Booking.com in November 2019.

All data, figures & charts are valid as of 06/07/2020. All trading carries risk. Only risk capital you can afford to lose.