Stocks pull back after Monday surge

European markets have opened softer this morning, potentially locking in profits as coronavirus fears continue to resurface. The FTSE and Dax are down 1% a piece and US futures are pointing towards a 0.5% dip on the open. Stock markets across the world soared on Monday, despite hundreds of thousands of new coronavirus cases being reported globally over the weekend. Investors continued to focus on vaccine hopes and recent economic data, ignoring the surge in cases, which, in the US, has not yet caught up to a surge in deaths. A surge in China and Hong Kong-listed shares also helped sentiment globally; the CSI 300 index finished the day 5.7% higher, while the Hang Seng Index was up 3.8%. Elsewhere, the S&P 500 gained 1.6%, the FTSE 100 was up 2.1% and the German Dax Index jumped 1.6%.

Uber made headlines on Monday, after announcing it is shelling out $2.7bn in an all-stock deal to buy Postmates, which is a rival to its food delivery service UberEats. Demand for Uber’s core ride service has collapsed due to the pandemic, but online food delivery orders are soaring with consumers stuck at home. According to reporting by NPR, the combined UberEats and Postmates business will have a 37% share of the US food delivery market, behind DoorDash’s 45% and ahead of GrubHub’s 17%. Uber originally tried to buy GrubHub earlier in the year, which would have catapulted it to the number one spot. The company’s share price jumped 6% on the news. 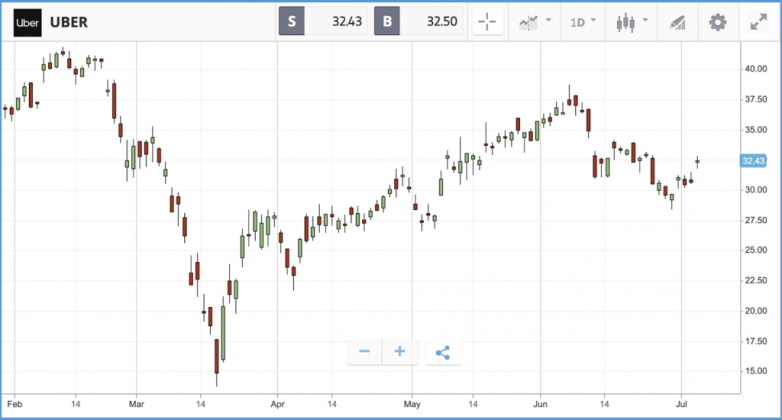 The Nadsaq Composite continued to build out its lead over the other major US stock indices on Monday, climbing 2.2% to the S&P 500’s 1.6% and the Dow Jones Industrial Average’s 1.8%. Monday’s gains put the S&P 500 back within touching distance of positive territory year-to-date. The index was led higher by the consumer discretionary, communication services and financials sectors, which gained 3.2%, 2.2% and 2% respectively. Amazon was up 5.8%, while Goldman Sachs climbed 5.1%, and Twitter 4.8%. In the Nasdaq Composite, Tesla led the way, jumping 13.5% after a JPMorgan analyst – who has the lowest price target of all analysts covering the stock – raised his price target, albeit to a level still significantly below the firm’s current share price. Netflix and Ebay helped the Nasdaq higher too, with the pair gaining 3.6% and 3.3% respectively. Streaming service Netflix is now up 52.6% year-to-date, valuing the firm at more than $200bn.

Housebuilders helped the FTSE 100 higher on Monday, with the index finishing out the day 2.1% up. Barratt Developments was the biggest winner, gaining 8% after announcing that all of its operational sites were back up and running as of June 30, with all staff now at work again. Rivals Persimmon and Taylor Wimpey followed Barratt higher, finishing 6.2% and 5.1% up respectively. Rolls Royce and a bevy of banking names were also among the day’s top performers. Barrat posted its gains despite also attracting some negative headlines on Monday; the firm has found structural problems with several developments, which it expects to cost GBP70m to fix. Further down the market cap spectrum, the FTSE 250 index also made up good ground on Monday, finishing the day up 1.4%. In other headlines, insurer Aviva made an unexpected CEO change, 23% was wiped off fashion firm Boohoo Group’s stock after concerns about its factory conditions were reported, and UK car sales sank 35% in June versus the same period a year earlier.

Paychex: Human resource and payroll outsourcing firm Paychex reports its latest quarterly earnings today. The $28bn market cap firm’s share price is down 8.6% year-to-date, after a 30% surge over the past three months. Analysts are expecting an earnings-per-share figure of $0.60, and overwhelmingly favour a hold rating on the stock. How well technology investments made in recent years have helped the company weather the Covid-19 storm will likely be a focus of analysts on the company’s earnings call.

Levi Strauss & Co: Fashion retailer Levi Strauss has experienced a rough ride in 2020. Its share price has jumped by more than 50% over the past three months, but remains down 25.3% year-to-date. Consumer spending on clothing has sunk due to the pandemic, and the firm only makes a small fraction of its revenue through online sales. Levi Strauss reports its second quarter earnings today, where analysts will be probing for how store reopenings have been translating into revenue, and management’s prognosis for the rest of the year given that surging Covid-19 case numbers in the US threaten to lead to further lockdowns. Analysts are expecting the company to have made a $0.48 per share loss for the quarter.

Job openings: May job openings figures from the US Labor Department will be released on Tuesday, where the expectation is for a decline from April’s figure of five million, which was the lowest figure in over five years. The report lags a month behind nonfarm payrolls and unemployment rate data.

Research from The Hebrew University of Jerusalem has found Bitcoin’s secondary transaction network may be vulnerable to hackers.

Bitcoin can be slow to settle exchanges as only a few transactions per second are supported. As a result the Bitcoin Lightning Network was established to help buyers and sellers transact more quickly. While it is separate to Bitcoin itself, it is still connected and it is this connection that hackers could exploit, the university explains.

The researchers ran dummy tests to see if its hacking operation could work to ‘loot’ Bitcoin, during periods of transaction congestion and found that they were able to simulate the theft of around $1,021,476 worth of Bitcoin. The researchers did highlight however that while an issue, there were several potential fixes which could be implemented to the network to close the loophole and protect users.

All data, figures & charts are valid as of 07/07/2020. All trading carries risk. Only risk capital you can afford to lose