United Airlines signals plans to lay off nearly 50 of staff

On Wednesday, United Airlines said that it is sending layoff notices to 36,000 employees, which is nearly half of its US staff. That may not be the final figure, but United is keeping its options open while ensuring it complies with laws requiring 60 days’ notice ahead of mass redundancies. Per Associated Press, United officials are hoping the final number will be lower, with some staff offered early retirement packages instead of being laid off. The job cuts could include more than 10,000 flight attendants and 2,250 pilots. United’s action is not unique, but it is the most extreme of any major US carrier so far. Delta issued layoff notices to more than 2,500 pilots last week, with several more reportedly eligible for an early retirement option. In May, American Airlines said that it plans to cut management and support staff headcount by around a third. 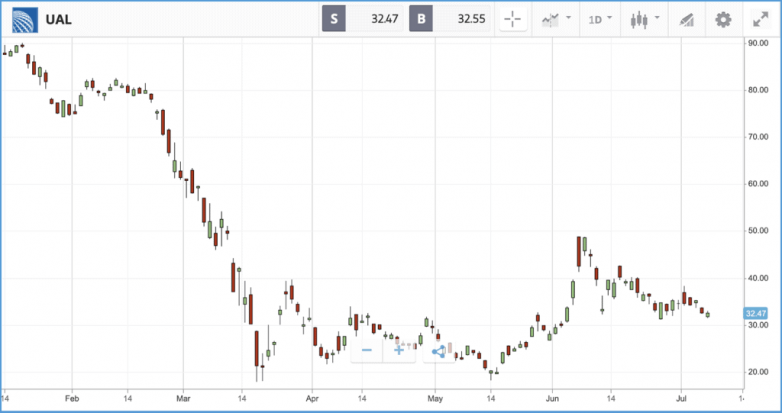 Although US passenger numbers have recovered somewhat in recent weeks, they remain far below typical levels. In May, 7.2 million passengers passed through Transport Security Administration checkpoints, versus 74.5 million in May 2019. In June this year, that jumped to 14.5 million versus 76.6 million, and in the first week of July 4.7 million travellers were logged versus 17.2 million in the first week of July 2019. All three of Delta, United and American are down more than 50% year-to-date in terms of share price, with United the hardest hit at negative 63.1%.

All three major US stock indices came out on top after a volatile trading session on Wednesday. The S&P 500 opened higher, gaining close to 1% versus Tuesday’s close by the mid-morning. It sank back to a loss before midday, then climbed back to a gain towards the close. The information technology and consumer discretionary sectors helped the market higher. Twitter was one of the biggest winners, jumping 7.3% after posting a job advert that said it is launching a subscription platform under the codename Gryphon. There were few details in the advert, which was edited to become even more vague after being reported on. Investors were buoyed as diversifying its sources of income beyond digital advertising, would be a major step forward for the company. During the pandemic, digital advertising-dependent tech firms have struggled, as companies have pulled back on their ad spending. Twitter stock is now up 10.5% year-to-date.

The Nasdaq Composite was once again the biggest winner on Wednesday, gaining 1.4%, helped higher by companies including Biogen, Nvidia and Amazon. In earnings news, Bed Bath & Beyond announced it is closing 200 stores permanently, after the pandemic cost it close to 50% of its revenues.

Chancellor Rishi Sunak’s emergency budget, delivered on Wednesday, was met with a muted response by investors perhaps due to the fact that much of the news was already out there and priced into the market already. The FTSE 100 fell 0.6%, after plans including, a new job retention bonus as the furlough scheme winds down, funding for a job creation scheme, a temporary stamp duty cut, a VAT cut for the hospitality sector, and discounts on eating out for consumers were announced. Sunak’s plan is more targeted on the hardest hit sectors of the economy than government interventions in other countries; in the US, the entire population was handed a $1,200 per person stimulus payment to use at their own discretion.

The FTSE 100 was led lower by names including, advertising giant WPP, International Consolidated Airlines Group, and HSBC. WPP fell 5.4%, the day after announcing that three advertising businesses it owns are merging, with management buying a 49.99% stake and WPP remaining the majority shareholder. In the FTSE 250, which sank 1% on Wednesday, FirstGroup was by far the biggest faller. The coach operator’s stock sank by more than 20% after it used a warning about its ability to continue operating; the company also said it has enough resources to continue running for at least 12 months.

Walgreens Boots: This week, pharmacy retailer Walgreens Boots announced it has reached a deal with a primary care firm to open doctors’ offices in more than 500 drug stores over the next five years, targeting underserved markets. That partnership will likely be one focus for analysts when the company reports its latest quarterly earnings on Wednesday. Walgreens stock is down 28.3% year-to-date, and has largely been left out of the recent market rally. Analysts, who overwhelmingly favour a hold rating on the stock, are anticipating an earnings per share figure of $1.17 for the quarter, versus the $1.29 they had been expecting three months ago. Late last year, it was reported that Walgreens was exploring options to go private in a huge buyout, but there has been little in the way of an update since.

Jobless claims: Initial weekly jobless claims will be reported in the US today. Over the preceding four weeks, the figure has ticked down from 1.54 million new weekly unemployment filers to 1.43 million. Expectations are for the figure to continue its downward trajectory in this week’s data. Since mid-March, more than 50 million new unemployment claims have been filed.

Bitcoin is still very much trading sideways and whilst $10,000 has been a hurdle for some time, it does appear that the $9,000 level is providing some support also. Despite lower volumes, bitcoin has made some gains over the last couple of days and has crept back above the $9,400 mark. The low volatility in general gives us an indication that there is more sustained ‘hodling’ prevalent at the moment.

All data, figures & charts are valid as of 09/07/2020. All trading carries risk. Only risk capital you can afford to lose.