Over the weekend the surge in Covid-19 cases in the US continued to escalate, with Florida setting a record for the most new cases in a single day from any state. More than 15,000 new cases were reported on Saturday in the sunshine state, with the positivity rate of tests — a key measure of how fast the virus is spreading — reaching 19.6% according to Johns Hopkins University. Despite the pandemic progress, all three major US stock indices posted gains on Friday ahead of the weekend, with investor sentiment boosted by a variety of updates on Covid-19 vaccine and treatment hopes. US futures also point towards a firmer open today, currently trading up 0.5%. 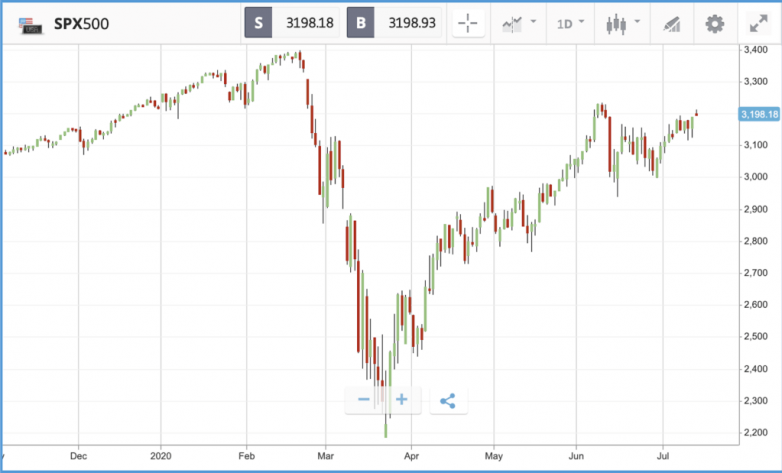 The harrowing numbers from Florida and other states arrive as Q2 earnings season kicks into gear and the race for the presidency heats up. The big banks are first up reporting earnings this week, with JPMorgan, Citi, Wells Fargo, Goldman Sachs and more all delivering updates, alongside some of corporate America’s other giants, such as Microsoft, Pepsico and Delta Airlines. Earnings reports for Q2 carry a great deal more uncertainty than Q1, given that lockdowns applied throughout the quarter, and the majority of companies have thrown out their financial guidance.

In the presidential race, President Trump continues to fall behind Joe Biden, but election watchers are cautious given that polling in 2016 indicated a comfortable lead for Hillary Clinton a similar distance out. Over the weekend, a new poll showed Biden leading Trump by five percentage points in Texas, a state that has gone Republican in every presidential election since 1980.

Although it lagged slightly on Friday compared to the other major stock indices, the Nasdaq Composite continued to race ahead last week. The tech-heavy index gained 4% over the course of the week, versus 1.8% for the S&P 500 and 1% for the Dow Jones Industrial Average. Friday ran against the grain, with the energy and financial sectors — two of the hardest hit in 2020 — leading the way in the S&P. JPMorgan and Goldman Sachs led the Dow, closing 5.5% and 4.4% higher respectively. Traders at T. Rowe Price said in a Friday note that vaccine hopes seemed to support share price gains last week, but “few concrete developments appeared to drive the rally”.

There was more bad news for Boeing on Friday, as American Airlines has reportedly threatened to cancel some of its orders for the aerospace giant’s troubled 737 MAX airliners. Per The Wall Street Journal, the airline found it difficult to secure the financing it required for the 17 jets. Counterintuitively, Boeing stock actually rose 3% following the news, as the reasoning for the cancellation is financing driven rather than the drawn out controversy surrounding the airliner.

London-listed shares climbed on Friday, with the FTSE 100 finishing the week 1% ahead of where it started. The end-of-week gains followed a lacklustre market reaction to Chancellor Rishi Sunak’s emergency budget, which included GBP30bn of support to boost the economy and job market. Measures announced included a stamp duty holiday, a scheme to drive restaurant demand and incentives for companies to bring furloughed workers back. From when the Chancellor announced the measures to the end of Thursday, the FTSE 100 fell by more than 2%, and is still down over 1% versus before the announcement.

On Friday, Barclays, hospitality firm Whitbread and home emergency company Homeserve led the FTSE, climbing 5.2%, 4.8% and 4.4% respectively. In the FTSE 250, which climbed 1.2% on the day — but fell 0.7% over the course of the week — pub and restaurant company Mitchells & Butlers was one of the top performers. The stock jumped 9.6%, after a relatively smooth start to the reopening of bars and restaurants across the UK.

PepsiCo: Drink and snack giant PepsiCo’s share price is close to flat year-to-date, despite being directly impacted by the closure of bars, restaurants, sports venues and other purveyors of its products. Consumer demand for snacks while working from home has likely been one saving grace for PepsiCo. Last month, the company made headlines after announcing that it is rebranding its Aunt Jemima pancake mixture and syrup in response to criticism that the imagery perpetuates racial stereotypes. Currently, 10 Wall Street analysts rate the stock as a buy, two as an overweight and seven as a hold. Consensus expectations are for the $187bn market cap firm to report an earnings per share figure of $1.25 when it delivers its Q2 update on Monday.

Ocado: UK-based online grocery delivery firm Ocado has been thrust into the spotlight by the coronavirus pandemic as shoppers have turned to the service in droves during lockdown. The company’s share price is up more than 50% year-to-date, and 75% over the past 12 months. Ocado reports its latest set of quarterly earnings tomorrow, analysts will be certain to probe management on how sticky new customers acquired during the lockdown are looking now that the UK’s reopening is well underway. Currently, analysts favour a hold rating on the stock, with the median price target significantly below its current share price.

UK GDP: Tomorrow in the UK, the Office for National Statistics will report May GDP estimates, providing a month-over-month and year-over-year view of the hit the economy took in May. According to Trading Economics, expectations are for UK GDP to have grown 5% versus April, but it will still be down double digits versus the same time last year. In April, the UK’s GDP was more than 20% lower than its level in the same month in 2019.

Second calendar quarter earnings season begins this week in the US, which is almost certain to contain some major upsets. Many companies have scrapped guidance for the rest of the year, so there are likely to be some significant divergences between investor expectations and reported results. Per Reuters, Wall Street analysts expect companies in the S&P 500 to report a 40% plus drop in Q2 earnings versus the same period last year. This follows the 12.8% earnings fall reported in Q1.

Some of the first companies on deck are America’s biggest banks, with near-zero interest rates, Federal Reserve stress testing, dividend payments and revenue from the federal Paycheck Protection Program — which banks have been implementing — all likely to be key focuses. The amount of cash banks are having to set aside for losses on outstanding loans they have made will also be a key part of Q2 earnings figures.

US benchmark Treasury yields could go below zero if they continue their downward trend, an event which would spark a rush into Bitcoin, the former head of hedge fund sales at Goldman Sachs has said.

There is already more than $17bn of negative-yielding US Treasuries in the market and the 10-year yield currently sits at just 0.63%. Such an event would lift Bitcoin as an alternative safe haven in a world where traditional currencies have lost much of their value. Bitcoin has rallied hard this year and is currently sitting at $9,228.

All data, figures & charts are valid as of 13/07/2020. All trading carries risk. Only risk capital you can afford to lose