Volatile session sees Tesla jump 14 then sink to a loss

Investors went through a rollercoaster trading session on Monday, at one point the S&P 500 was up 1.5% versus Friday’s closing price, before sinking back to a 0.9% loss for the day. Tesla experienced one of the more dramatic swings, jumping double digits intraday before falling back to a 3% loss. That gain at one point put Tesla’s market cap past the $300bn mark, making it 12.5 times more valuable than Ford. The rally ran out of steam in the afternoon following California, by far the biggest US state economically, announced that it is rolling back its reopening plans due to a surge of Covid-19 cases. 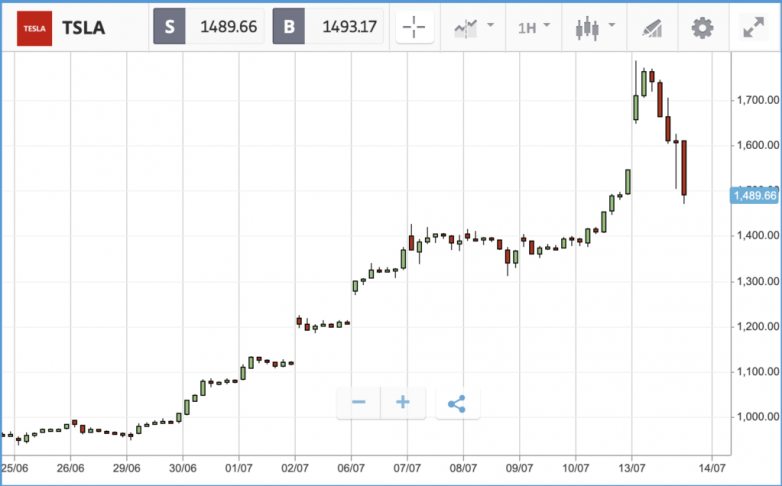 New restrictions include shutting down restaurants, bars, museums and more again, weeks after reopenings were allowed. Over the past week California has reported record new daily case numbers, which outstrip those that came out of New York — the original epicenter — during its worst days of the crisis. Dr Anthony Fauci, part of the coronavirus task force, warned that local US health infrastructure is “in tatters” and that doctors are “building the plane while flying it.” It was also reported on Monday that the US budget deficit hit $3 trillion for the 12 months to June, driven by stimulus spending and lost tax revenue; that deficit is equivalent to 14% of US GDP.

This has rippled into the European open this morning, with the FTSE down 1.2% and the Dax down just shy of 2%. These latest restrictions — combined with a new flare up in US-China relations as the US disputes China’s claim to resources in the South China Sea — have poured cold water on risk appetite, for now at least. China themselves had some more upbeat news overnight, export numbers unexpectedly rose as demand for commodities returned following stimulus measures. We’ve also seen a rise in import numbers as global demand for goods begins to pick up.

The Nasdaq Composite, which has been soaring ahead of the other major US stock indices, fell hardest on Monday, closing the day 2.1% down. Stocks including Netflix, Adobe and Advanced Micro Devices all sank by more than 4%, while trillion dollar tech giants Amazon and Microsoft were both off by more than 3%.

In earnings news, PepsiCo reported that sales fell by 3.1% during Q2, versus the same period last year. While the firm took a hit due to its drinks not being sold through restaurants and bars, snack brands such as Cheetos and Doritos enjoyed a boost from hungry consumers stuck at home, which softened the blow. The company also said it spent $400m on costs related to the pandemic, such as protective equipment for employees. PepsiCo stock closed the day 0.3% higher, but was as much as 2% up before the broader market sell-off late afternoon.

The FTSE 100 and FTSE 250 closed the day on a high, closing before the winds shifted in the US later on Monday, with both finishing more than 1% up. A variety of sectors helped the FTSE 100 higher, with brokerage Hargreaves Lansdown, pest control business Rentokil and miner Rio Tinto all closing the day out more than 3% higher.

The UK’s exit from the European Union was brought into focus yesterday, after the government revealed a huge checklist that companies will need to go through in order to continue trading with the EU, regardless of the outcome of Brexit negotiations.

British chip company Arm Holdings, which was taken off the public market when SoftBank bought it four years ago in a GBP23 billion deal, also hit headlines on Monday. Per The Wall Street Journal, SoftBank is considering a full or partial sale of the company, which was Britain’s biggest tech firm. The review is reportedly in the early stages, with Goldman Sachs advising.

US banks: Q2 earnings season kicks into gear today in the US, with banking giants JPMorgan, Citigroup and Wells Fargo all on deck. For all three banks, the impacts of an ultra-low interest rate world, cash being set aside for loan losses and the security of dividend payments will all be key focuses of analysts. Increased revenues from a higher volume of trading volume and investment banking transactions could also be a feature, as well as fees collected from implementing the government’s Paycheck Protection Program loan program.

Delta Air Lines: Delta reports Q2 earnings today, after a quarter in which it faced near non-existent demand for air travel. The company’s share price remains down more than 54.1% year-to-date, despite a rally in recent months. With some states beginning to bring back certain lockdown restrictions, investors will be watching for management’s insight into any recovery of demand globally as lockdowns have eased, and if the company can weather another period of widespread restrictions. The company’s policies around keeping travellers safe will also likely be under scrutiny. One set of questions the firm’s leaders won’t have to answer, that many rivals will, is how it is handling orders for the still-grounded 737 MAX airliner. Delta is the only one of the big three US airlines not to have opted for the aircraft. Analysts are expecting a $4.16 loss per share for Q2. Currently nine rate the stock as a buy, three as an overweight and seven as a hold.

Fastenal: Industrial and construction goods distributor Fastenal also reports its latest quarterly earnings today, after a 2020 that has seen its share price gain 17.4% so far. The $25bn market cap firm is expected to have suffered lower demand for its services during Q2 due to construction projects grinding to a halt, and analysts will be probing on how well the company is set up to handle a likely backlog of demand as economies reopen. Wall Street analysts are anticipating an earnings per share figure of $0.37 for the quarter, and overwhelmingly favour a hold rating on the stock.

This difficulty measure accounts for the process of mining new blocks of Bitcoin’s blockchain. The difficulty alters around every 14 days to regulate the flow of new blocks. It ensures new blocks are only ever created every 10 minutes. If more miners are working on the network the difficulty will increase to slow down block productions.

The hash rate dipped in the aftermath of the halving event in May but has since recovered spectacularly. The higher the difficulty, the more expensive it is to mine Bitcoin. Typically this causes some miners to sell out of the operation, which in turns lowers the difficulty as demand falls away again.

All data, figures & charts are valid as of 14/07/2020. All trading carries risk. Only risk capital you can afford to lose.