Twitter suffered a hack late last night that led to high profile figures including Barack Obama’s account being compromised and used to advertise a Bitcoin scam. According to Twitter’s support account, hackers broke into the social network’s own employee systems through which they were able to access high-profile accounts.

The hackers gained unprecedented access to accounts from public figures including Joe Biden, Elon Musk, Kanye West and Bill Gates, and the profiles of big-name firms such as Apple.

The hackers have allegedly netted around 12 Bitcoins or $110,000 in the attack, although according to Coindesk it will be possible to track and trace the funds as they are moved.

Twitter’s share price took a hit in after hours trading as a result, shedding 5%. It could well be very volatile at today’s open. 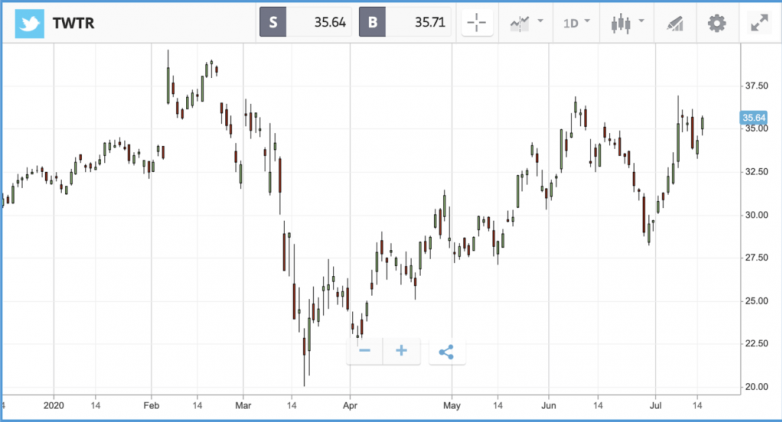 In earnings news, Goldman Sachs delivered its best trading revenues in years to hit a $2.4bn profit that was over 50% higher than analysts had been anticipating. The company’s share price only finished 1.4% higher, down from the 5% it spiked as the market opened, as management warned that trading volumes had slowed in recent weeks.

Health insurance and service provider UnitedHealth reported a jump in profits due to canceled procedures and doctors visits it would normally have to pay out for during the second quarter, with Covid-19 payouts paling in comparison. The company did see a drop off in corporate plan enrollment, a sign of current economic turmoil. UnitedHealth stock closed the day 1.4% down, as management cautioned the positive set of results will be “offset in the quarters ahead” by pent-up demand for medical procedures and other Covid-19 costs.

In other headlines, data showed China’s economy grew 3.2% in Q2, Apple won a court battle over a $14.8bn tax bill in the EU, and the Opec-Russia oil alliance agreed to increase production next month.

S&P 500 at the breakeven point YTD

The S&P 500 climbed 0.9% on Wednesday, taking it to within a hair’s breadth of positive territory year-to-date. Travel stocks were among the biggest climbers, as vaccine hopes fueled sentiment around a potential return to more normal travel demand. Royal Caribbean Cruises jumped 21.1%, while American Airlines was up 16.2%, and MGM Resorts International climbed 12.6%. American also told staff on Wednesday, in a company memo, that 25,000 employees will be notified they will potentially be furloughed on October 1. That is the first day the airline will be able to take such action, as to-date the terms of the industry’s government bailout prevented layoffs, furloughs or pay cuts.

In the Dow Jones Industrial Average, which gained 0.9% on Wednesday, Boeing was the biggest winner, closing the day 4.4% higher.

London-listed shares soared yesterday, with the FTSE 100 closing the day 1.8% up. Similar to the US, it was vaccine optimism driving prices higher, along with a surprise 0.6% June inflation figure, above estimates for the month but still well below the 2% targeted by the Bank of England.

International Consolidated Airlines Group led the FTSE 100 with a 10.7% gain, followed by food service business Compass Group and hospitality firm Whitbread, which both finished more than 7% up. In total, more than a dozen names in the FTSE 100 delivered a 5% plus gain on Wednesday. At the bottom of the FTSE 100 was fashion house Burberry Group, which sank 5.6% after announcing it plans to cut 500 jobs after lockdowns hit sales hard.

In the FTSE 250, cruise line Carnival and Cineworld Group, plus airlines Tui and easyJet, were all among Wednesday’s top performers as investors pin their hopes on positive vaccine news driving a recovery in demand for travel and entertainment.

Johnson & Johnson: $390bn market cap behemoth Johnson & Johnson is tied into a number of the key pandemic trends. Its pharmaceutical arm is into clinical trials of a Covid-19 vaccine, while its consumer brands may have benefited from customer stockpiling. The company reports its latest quarterly earnings on Thursday, where vaccine progress and consumer demand trends will likely be a key focus of analysts. Johnson & Johnson stock is close to flat year-to-date; currently 13 analysts rate it as a buy or overweight, and seven as a hold.

Netflix: Streaming service Netflix has been a pandemic success story, with its share price jumping more than 60% year-to-date, as consumers stuck at home turned to their televisions for entertainment. In Q1, the company added 16 million new subscribers to take its total passed 180 million, investors will be watching closely to see how much of that coronavirus-induced growth was sustained into the second quarter. Wall Street analysts are anticipating an earnings-per-share figure of $1.82, up from a predicted $1.54 for this quarter three months ago. On Wednesday, a Morgan Stanley analyst reportedly upped their 12-month price target on the stock to $575, versus its $523 Wednesday closing price.

US banks: Both Bank of America and Morgan Stanley report their Q2 earnings on Thursday morning, with investors watching closely for whether trading revenue can prove the supporting factor in Q2 it has for other banks and the scale of loan loss provisions. Wall Street analysts currently swing in favour of an overweight rating on the stock.

All data, figures & charts are valid as of 16/07/2020. All trading carries risk. Only risk capital you can afford to lose.