Netflix tumbles after hours as markets dip on China worries

Netflix tumbled after hours last night and US markets dipped following the momentous sell-off in Chinese equities this week. Netflix, which has seen its share price soar 75% from the lows in March, added 10.1 million new subscribers to its service in the second quarter, smashing estimates of 8 million from analysts. However, its warning that such levels were not going to be sustained into the second half spooked investors, with shares off 9% after hours. The group also promoted its content chief Ted Sarandos to co-CEO, putting the 20-year veteran of the pioneering streaming video service in line as the clear successor to co-founder Reed Hastings. 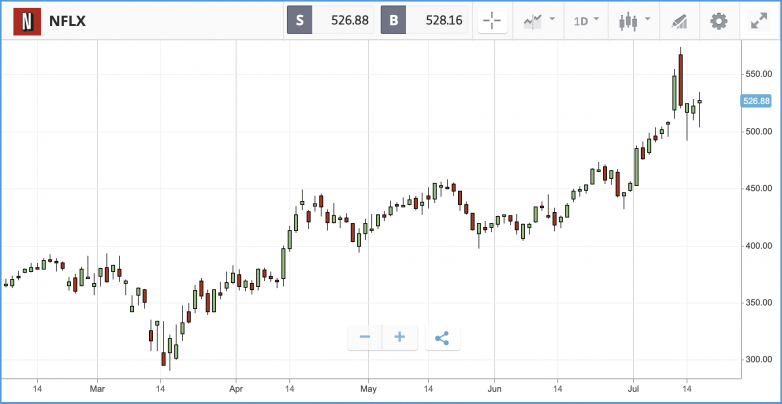 More widely, markets continue to digest events in China which have rattled sentiment. Chinese shares dropped almost 5% in one session this week after it reported a return to growth in the second quarter that failed to quash fears over the health of its economy. China’s economy rebounded 3.2%, but there were concerns it has been engineered by state support that might not last. Retail data also disappointed, suggesting an uneven economic recovery. Doubts about Chinese growth weighed on global markets, with the S&P 500 closing down 0.3% and Japan’s Nikkei off by 0.5%.

Both the Dow and the S&P 500 ended down on Thursday, with major stocks including Microsoft and Apple sliding amid rising unemployment claims which are causing concern about the long-term economic impact of the coronavirus. Although US retail sales increased more than expected in June, the resurgence in new COVID-19 cases is a major headwind, with some 32 million Americans on unemployment benefits. The S&P real estate and technology indices fell hardest, with both Apple and Microsoft off more than 1%. Twitter fell after hackers accessed its internal systems to hijack some of the platform’s most famous users, including US presidential candidate Joe Biden, reality TV star Kim Kardashian West, and Tesla billionaire Elon Musk as part of a bitcoin scam. As well as the tech stocks, American Airlines tumbled 7% after it sent 25,000 notices of potential furloughs to frontline workers and warned that demand for air travel is slowing again.

The FTSE 100 index closed in the red yesterday as global markets dipped amid some shocking figures from the country’s Debt Management Office (DMO). The UK’s index of leading shares closed the day down 0.7% at 6,250 points, after the DMO said that planned government debt sales from April to November 2020 will total a minimum of GBP385bn. The estimate of how much the government is set to borrow over the period is based on the government’s latest assessment of its financing requirement, and the figure – covering the first eight months of the tax year – is more than has ever been issued in a whole year before.

Defensive stocks including the pharmaceutical giants AstraZeneca and GlaxoSmithKline felt the brunt of the selling, off 1.7% and 1.2% respectively, while Burberry was also one of the worst performers, tumbling 2.4% after Wednesday’s first-quarter trading update in which it warned that margins are being hit. Meanwhile British Airways, the world’s largest operator of Boeing 747, said late Thursday it would retire its entire jumbo jet fleet with immediate effect.

BlackRock: The world’s biggest fund manager is scheduled to announce its Q2 earnings on Friday before the market opens. BlackRock is a key bellwether for the asset management industry, and following the blistering rally in equities in Q2, expectations are running high. The consensus is for earnings to come in at $6.99 per share, according to the Wall Street Journal, up significantly on the last quarter. As it stands, 13 analysts currently rate the stock as a buy, three as a hold and just one as an underweight. Over the last three months, earnings estimates have seen 11 upward revisions and only three downgrades.

State Street: Today before market open, State Street is anticipated to report second quarter earnings of $1.61, compared to $1.45 a year ago. The company beat forecasts in Q1 after benefiting from lower expenses, higher assets and rising fee income, although this was partly offset by a decline in net interest income and significantly higher provisions. Analysts are divided on the investment services firm, with 7 buys, 11 holds and 1 sell, according to Bloomberg.

According to Forbes inflows into the Grayscale Bitcoin Trust, Grayscale’s biggest flagship fund, have outpaced the creation of new bitcoin since May,

While the price of Bitcoin has remained relatively stable since June, trading in a range between $9,000- $9,600, institutions have been eager to buy in, according to Greyscale.

The group, which allows accredited investors to buy bitcoin and other major cryptocurrencies through its funds, recorded inflows of $906m for its second quarter — nearly double the previous quarterly high of $504m set in Q1.

Institutional investors, primarily hedge funds, accounted for 84% of Grayscale bitcoin and cryptocurrency fund investment in the second quarter of 2020, up from 81% for the trailing 12 months.

All data, figures & charts are valid as of 17/07/2020. All trading carries risk. Only risk capital you can afford to lose.