Soft drinks giant Coca-Cola was one of the highlights of Tuesday’s earnings reports. The firm reported that revenue was down 28% in Q2 versus the same period last year, with profits off by more than 30%, but investors were buoyed by the fact chief executive James Quincy said he expects the second quarter to be the most difficult of the year. Coca-Cola stock climbed 2.3% following the earnings report, in which Quincy also noted that the company has seen “encouraging signs of increased consumption” in China, which is the country furthest into its economic reopening. 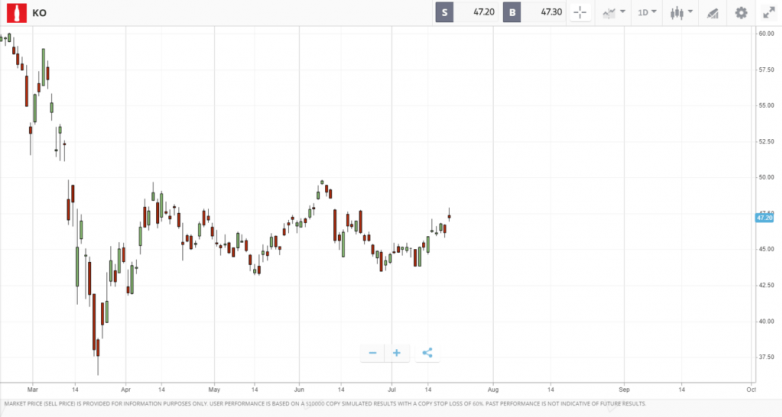 United Airlines’ earnings report was also in the spotlight on Tuesday, in which the carrier reported a $1.6bn second quarter loss but noted that it expects to reduce cash burn from $40m a day in Q2 to $25m a day in Q3. The firm will be holding a call to discuss the results on Wednesday morning, with surging Covid-19 cases in the US threatening an uptick in air travel demand in recent months likely to be a key point of focus. From their low of sub 100,000 in April, the number of passengers passing through official checkpoints in the US has recovered significantly, but has stalled around the 700,000 mark – which is still less than a quarter of pre-pandemic volumes.

Tech stocks’ mammoth rally took a pause on Tuesday, with traditional value sectors such as energy and financials leading the way. In the S&P 500, which closed the day 0.2% higher, the energy sector gained 6.2%. Energy names were buoyed by a fourth-month-high oil price, with WTI Crude hitting $42 a barrel. In the S&P, Occidental Petroleum, Devon Energy and Apache were the biggest winners, closing the day 11%, 10.5% and 9.7% higher respectively. All of the other top 10 stocks in the index were energy names, including oil giant Chevron, which finished the day up 7.2%.

At the other end of the spectrum, the tech heavy Nasdaq Composite faltered, falling 0.8%, although its year-to-date gain is still over 19%. Notably Tesla’s share price fell back 4.5% before it delivers its quarterly earnings on Wednesday. The sell-off appeared to be driven by a note from Joseph Osha, an analyst at JMP Securities, who has been a major proponent of the stock. Osha said that he still believes in the firm’s long-term future, but said “we cannot arrive at a reasonable basis for arguing that the stock should be valued above current levels, even considering our fundamental outlook.”

The FTSE 100 was flat on Tuesday, after EU leaders agreed a 1.8 trillion euro aid and budget deal to help support member states, following days of negotiating. A jump in the value of the pound versus the US dollar tempered the index’s gains; when the pound is stronger, the value of FTSE 100 company earnings – some 70% of which are made overseas – effectively gets reduced. Brokerage Hargreaves Lansdown was the biggest winner of the day in the FTSE 100, closing it out 10.1% higher. It was followed by Rolls Royce, which jumped 7.9%, and BP – which rose 4.3% on the back of the oil price spike.

At the bottom of the index was gambling firm GVC, falling double digits after it was reported that HMRC has widened an investigation into the Ladbrokes owner over its former Turkish online gambling operation. That news followed GVC announcing that its chief executive, Kenny Alexander, is leaving after 13 years. In the FTSE 250 – up 0.7% on Tuesday – travel, energy and hospitality names led the way. Train and bus booking firm Trainline was up 11.1%, airline TUI climbed 6.1% and pub chain JD Wetherspoon added 6.1%

Microsoft: $1.6trn market cap technology giant Microsoft reports its latest set of quarterly results on Wednesday, after a 2020 that has seen its share price gain 32.4%. A primary driver of that gain, and one of the main focuses of its Wednesday earnings report, is the company’s Azure cloud business. The division is a likely beneficiary of firms pouring resources into their cloud operations as they adapt to a world where virtual working is expected to become a more permanent feature. Microsoft has not been completely immune from the impact of the pandemic; this week LinkedIn, which it owns, announced it will be cutting 6% of its workforce as companies that use the platform to source talent have slowed down hiring activity. Currently, 30 analysts rate the stock as a buy or overweight, and three as a hold, with no sells.

Tesla: One of the highlights of this quarter’s earnings season will be Tesla’s report. If the company can report a profitable second quarter, it will be one step closer to inclusion in the S&P 500 index, which would lead to a swathe of passive funds buying the company’s stock automatically. The S&P 500 requires four consecutive profitable quarters before a company can join, but its inclusion will not be automatic if it hits that milestone. In Q1 the firm reported better than expected vehicle deliveries, and investors will be watching closely to see if it has handled Q2 similarly, following a 275% run-up in the stock year-to-date. The firm remains one of the most divisive companies in terms of analysts’ viewpoints. Price targets on the stock range from $295 to $2,322, with an even spread between buy, hold and sell ratings.

Unilever: Consumer goods firm Unilever, which is listed on the London Stock Exchange, is almost exactly flat year-to-date share price wise. The company sits behind brands like Ben & Jerry’s ice cream and PG Tips tea, and is a regular feature in many equity income portfolios given its 3% plus dividend yield and steady long-term performance. In 2020, the firm’s peak to trough fall was far less severe than the broader market, which it is now more than 15% ahead of year-to-date. Unilever reports its latest quarterly earnings on Thursday, where investors will be watching for insight into consumer demand now that lockdowns are easing in many markets.

1.1 million bitcoins, equivalent in value to more than $10.9 billion at current prices, has been identified as mined and owned by elusive bitcoin founder, Satoshi Nakamoto, by crypto analyst Whale Alert.

The analyst found that over 22,000 of the first 50,000 bitcoin blocks were mined by the mysterious founder. Whale Alert says the founder mined constantly in the early days of the cryptoasset to protect the network from a 51% ownership takeover – where one individual or organisation buys a majority of a cryptoasset, effectively taking control of it.

Whale Alert identified Satoshi’s bitcoins by studying a unique pattern associated with the creator’s mining technique, a so-called “extra nonce technique”. The reliability of such a technique for identifying miners has been called into question by other analysts, however.

All data, figures & charts are valid as of 22/07/2020. All trading carries risk. Only risk capital you can afford to lose.