Signs emerge that US recovery is faltering

Stocks fell sharply in the US on Thursday, as surging Covid-19 case numbers began to make their mark on the nation’s economic recovery. Jobless claimant figures reported by the Labor Department showed initial jobless claims rose week-over-week, the first increase since March. Tech names fell furthest on Thursday, as while many are clear beneficiaries from consumers and workers being forced to live virtually, they have also been at the forefront of the recent market rally. 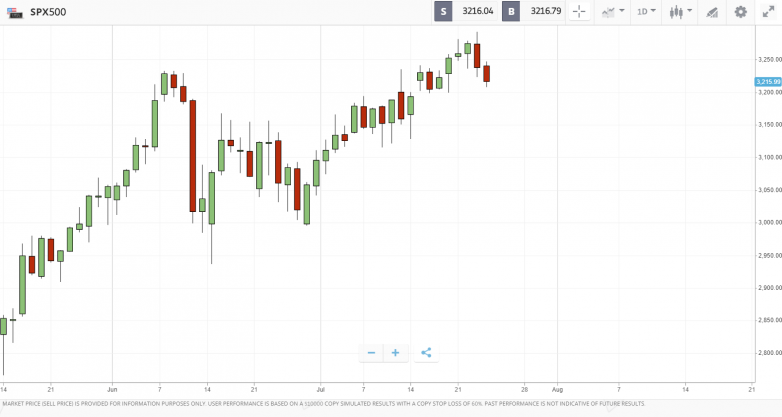 Adding to the picture of a US economy whose recovery is faltering, airlines Southwest and American Airlines poured cold water on expectations for a bounce back in air travel. American said that it will be cutting back flight numbers, while Southwest noted that cancellations are picking up with demand looking weak heading into autumn, according to The WSJ. Total US coronavirus cases passed four million on Thursday according to a tracker run by Johns Hopkins University. The rate of new cases is the most worrying component – the last million were added in just over two weeks.

The tech heavy Nasdaq Composite fell hardest among the three major US stock indices on Thursday, closing the day 2.3% down. In the S&P 500, which finished 1.2% off, it was the information technology sector that suffered the biggest hit, falling 2.6%. Consumer discretionary stocks also found themselves well into the red, with the sector losing 2% overall. In earnings news, chipmaker Intel beat both earnings and revenue expectations, but said the release of its next generation of chips will be delayed due to an issue in the manufacturing process. Intel stock slumped by more than 10% in after-hours trading, following the announcement, while key rival Advanced Micro Devices (AMD) added nearly 8% to its share price. In the Dow Jones Industrial Average, which fell 1.3% on Thursday, Cisco Systems was the only stock to add more than 1%, while Apple and Microsoft were the biggest losers. The two tech giants both closed the day more than 4% lower, while Amazon ended up down 3.7%.

The FTSE 100 and FTSE 250 were both close to flat on Thursday, but consumer goods giant Unilever provided a bright spot with its Q2 earnings report. Unilever delivered a smaller than anticipated drop-off in quarterly sales, noting that its hand hygiene and cleaning product lines have been growing rapidly, offsetting the damage from parts of its business that serve restaurants and businesses. The company’s share price jumped 7.9% following the earnings report, making it the most valuable FTSE listed company.

Education publisher Sage Group, miner Polymetal International and turnaround specialist Melrose Industries were the other biggest winners in the FTSE 100 on Thursday, closing 6.6%, 6.1% and 5.4% higher respectively. In the FTSE 250, gold miner Petropavlovsk was out in front, closing Thursday 17.6% higher. The firm is in the middle of a board battle between two large shareholders over control of the company. Despite the turmoil, the firm managed to deliver a 39% surge in first half sales versus the same period in 2019.

Verizon: $231bn market cap telecoms firm Verizon reports its Q2 earnings on Friday, months after rivals T-Mobile and Sprint finally completed their long-running merger. Verizon stock is down 9% year-to-date, and hasn’t taken part in the broader market rally over the past three months – although it also held up better than the broader market in the February to March sell-off. The firm’s progress in rolling out 5G technology, and whether the pandemic has interrupted those efforts, will be a likely focus of the Friday earnings call. Currently, seven analysts rate Verizon stock as a buy, one as an overweight, and 18 as a hold.

Nextera Energy: Nextera is one of the largest electric utility firms in the US, and the world’s largest producer of renewable energy sourced from wind and solar. Year-to-date, the electric utilities subsector of the S&P 500 is down 0.3%, but Nextera has climbed 16% – and is up 35% over the past 12 months. As the source of Nextera’s energy production is predominantly solar and wind, with some nuclear and other sources, it has not been as prey to the highly volatile oil market this year. The company reports its Q2 earnings on Friday; analyst expectations for the earnings per share figure the firm will report have hardly changed over the past three months, and sit at $2.50.

American Express: Credit card and financial services firm American Express has had a tough 2020, along with much of the financial sector. Its share price is down 22.4% year-to-date, although has enjoyed a 17.2% rally over the past three months. The collapse in retail and travel spending caused by the pandemic has dealt a major blow to the firm, which makes money on transactions, plus selling premium cards and interest on credit card balances. American Express reports its Q2 earnings on Friday, where analysts are anticipating the firm will have sunk to a loss. Wall Street analysts have shifted away from buy ratings on the stock in recent months, with consensus opinion now rating the stock as a hold.

It was perhaps one of the most extraordinary stories of 2019, the tale of former Nissan executive Carlos Ghosn escaping from house arrest in Japan where he was awaiting trial for financial crimes.

But it has now emerged that Ghosn paid for his ‘extraction’ from the country using $500,000-worth of bitcoin. According to filings made by US prosecutors, Ghosn’s son paid Peter Taylor, one of the men employed to assist in his escape, half a million USD in Bitcoin, through crypto exchange Coindesk.

Both Peter Taylor and his father Michael allegedly smuggled Ghosn out of Japan in a musical instrument case. The Taylors are in jail in the US awaiting trial while Ghosn himself remains at large in Lebanon.

All data, figures & charts are valid as of 24/07/2020. All trading carries risk. Only risk capital you can afford to lose