The tech giants’ share prices fell yesterday ahead of the CEOs of Amazon, Facebook, Alphabet (Google) and Apple testifying before Congress on Wednesday. Amazon founder and CEO Jeff Bezos will be making his first appearance before lawmakers according to the FT; he is set to argue that his firm plays a crucial role in supporting small and medium-sized businesses. Bezos will be appearing alongside Mark Zuckerberg, Apple CEO Tim Cook and Alphabet’s Sundar Pichai, to answer accusations that their trillion dollar businesses are anti-competitive. The CEOs will all be appearing remotely, with pre-released testimony showing that they will push the idea that competition remains high, and that their businesses provide a platform for smaller companies to thrive.

Amazon in particular has been a huge beneficiary of the Covid-19 pandemic. Its share price has soared 62.4% in 2020 so far, as widespread lockdowns drove consumers online, giving Amazon a greater share of household spending. It remains to be seen whether these hearings will have any teeth, but the fact all four CEOs will be in attendance shows how seriously it is being taken by the firms in question. Tomorrow after the market closes, all four companies report their results for Q2 in one of the most hectic after hours earnings sessions ever seen. 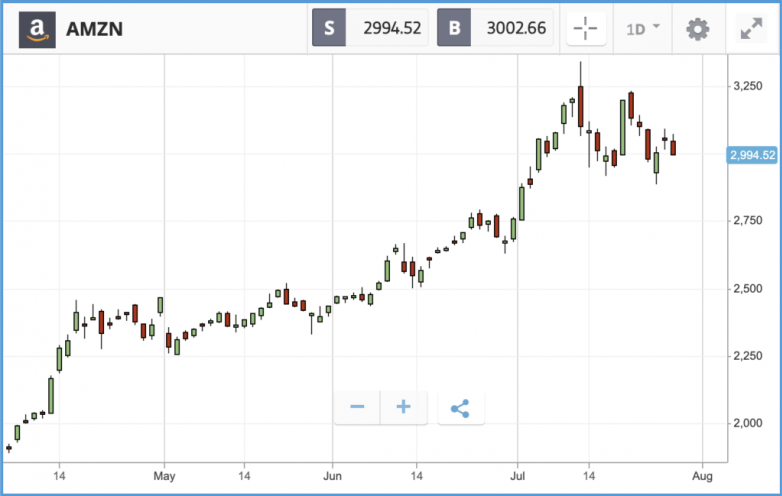 Ahead of the trial, markets were mixed overnight, with Asian stocks seeing a varied session as investors fretted about tonight’s US Fed announcement. The Federal Reserve is not expected to

resort to negative interest rates but some suspect it could turn to unconventional measures such as yield curve control or setting upper limits on short-term Treasury yields, in order to help maintain market order. In any case, markets will be looking for the reassuring rhetoric to continue and policy to remain accommodative

A weaker day for tech stocks pushed the Nasdaq Composite down 1.3% yesterday, with the S&P 500 falling 0.7% and the Dow Jones Industrial Average down 0.8%. One notable headline from corporate earnings season was the news that Moderna will be pricing its coronavirus vaccine at $50 to $60 per course, significantly more than Pfizer. Moderna stock finished the day 2% higher, with its year-to-date gain now standing at 317%, and its 12-month gain now over 500%. Pfizer climbed 3.9%, leading the Dow Jones after beating earnings estimates and raising its guidance.

At the other end of the spectrum was $89bn market cap conglomerate 3M, which dived after reporting that it had missed both profit and revenue expectations in Q2. The company is a major producer of N95 masks, which have provided a boost to sales, but it suffered badly as demand for the office and industrial supplies it produces collapsed due to the pandemic.

London-listed housebuilders and property developers jumped yesterday, with Berkeley Group, Barratt Developments, Land Securities Group, Persimmon and Taylor Wimpey all among the top 10 FTSE 100 stocks on the day. The rally came ahead of data on June mortgage lending and approvals, which is released for the UK on Wednesday.

Elsewhere, bank stocks were in the spotlight, as the Bank of England’s Prudential Regulation Authority said it will reevaluate the ban on banks paying dividends in the fourth quarter of 2020. Currently the European Central Bank recommends that banks don’t pay dividends until January 2021. Earlier this month, Royal Bank of Scotland chairman Howard Davies called on the BofE to lift restrictions on banks making payments to shareholders in order to make lenders more attractive to investors again.

Paypal: The surge in online transactions driven by the pandemic has been a boon for Paypal, which has seen its share price surge by more than 60% year-to-date, taking its market cap past the $200bn mark. As with any company whose services have been more in demand during the lockdown period, a key focus of analysts when the company reports its latest set of quarterly earnings today will be how sticky the firm expects those newly won customers to be. Analyst expectations for the firm’s Q2 earnings figures have risen over the past few months, and currently 36 analysts rate the stock as a buy or overweight, seven as a hold and one as a sell.

Shopify: Shopify’s earnings report today is likely to be watched closely given that Amazon CEO Jeff Bezos is likely to cite the firm’s rise as evidence of competition in the e-commerce business when he testifies before Congress on the same day. The $115bn market cap firm offers an e-commerce platform for businesses. It is headquartered in Canada but listed on both the Toronto and New York Stock Exchanges. The company’s share price has jumped by close to 150% in 2020 so far, and is up more than 200% over the past 12 months.

Aircraft manufacturers: Boeing will report its latest set of quarterly earnings in the US today, followed by rival Airbus delivering its own Q2 earnings report in Paris on Thursday morning. Boeing’s share price remains close to 50% down year-to-date, despite a 30% rally over the past three months, as the dual pressures of diminutive global travel demand and its continued troubles with the 737 MAX airliner keep up pressure on the company. Expectations for Boeing are low, with the rate of cash burn and timeline of a return to the skies for the 737 Max likely to be probed by analysts. Analysts anticipate Boeing will report a loss per share of $2.57 for Q2.

More than 30 firms with a market cap of over $10bn report earnings in the US today, with other highlights including General Electric, Qualcomm, Boston Scientific and Spotify. On Thursday in the UK, Royal Dutch Shell will deliver its second quarter earnings report.

While retail investors have been strong advocates of Bitcoin for many years, data out this week shows institutional investors are having increasing influence in the sector.

According to Intercontinental Exchange subsidiary Bakkt, an institutional investing platform, there were record numbers of trades for its monthly Bitcoin futures contracts during July.

The platform reported its highest ever figure for Bitcoin monthly futures on Jul. 28 with 11,506 contracts — an increase of 85% over the previous record, according to a report by CoinTelegraph. This was then superseded the next day when it saw some 11,706 contracts traded.

All data, figures & charts are valid as of 29/07/2020. All trading carries risk. Only risk capital you can afford to lose