Markets are firmly in the red this morning after a swathe of disappointing earnings updates coming from some of the biggest firms in Europe. Lloyds Banking Group in the UK is 7% lower after finding itself in a loss for the first half of 2020, Volkswagen followed suit and also slashed its dividend, it is over 4% lower. One bright spot is AstraZeneca, the company’s share price has soared this year, making it the UK’s most valuable firm. It posted better than expected second quarter sales and rose 2% on the day. 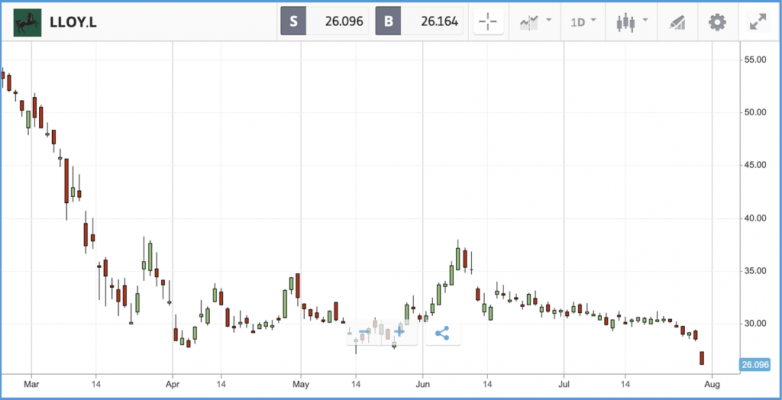 While congressional antitrust hearings featuring the CEOs of Amazon, Apple, Alphabet (Google) and Facebook dominated headlines on Wednesday, the proceedings were largely uneventful for the companies involved. While Facebook was attacked by conservative lawmakers, and Google was heavily scrutinised, investors appeared unphased by what they heard. All four companies posted share price gains of one to two percent on Wednesday.

It was earnings announcements that delivered the largest share price moves. Chipmaker Advanced Micro Devices (AMD) was the big winner of the day after reporting earnings post-market close yesterday. The company posted an earnings beat, with revenue up 26% year-over-year and profits coming in above analyst expectations. Buoyed by the momentum, and struggles of rival Intel, investors piled into the stock, sending its share price up 12.5% on Wednesday.

At the other end of the spectrum Boeing’s earnings came in below already low expectations, reporting a loss of $4.79 per share in Q2 versus a consensus estimate of $2.93. Commercial aircraft sales more than halved year-over-year, and the aerospace giant said it is planning more layoffs.

In other news, the Federal Reserve’s Open Market Committee voted to hold interest rates steady at near zero, with chairman Jerome Powell noting that economic activity and the labor market “remain well below their levels at the beginning of the year.”

Boeing’s earnings report appeared to take airline stocks down with it yesterday, as American Airlines and United Airlines both sank by around 3% on a day where the broader market soared. The Nasdaq Composite was up 1.4%, helped higher by names including AMD, PayPal and Starbucks. Payments giant PayPal closed the day out 4.7% higher after its own earnings report, prior to which CEO Dan Schulman said to MarketWatch that the second quarter was the strongest in the company’s history. He added that he doesn’t think “there is any going back” from the surge e-commerce has enjoyed during the pandemic.

A handful of retailers also found themselves close to the top of the S&P 500 yesterday. Victoria’s secret parent L brands soared by more than 30% after it announced plans to cut headcount at its headquarters, and re-committed to separating Victoria’s Secret and Bath & Body Works into standalone firms following the collapse of a private equity deal. Analysts were impressed by the company’s Wednesday earnings report, in which it reported a cash balance of more than $2.5bn and an untapped credit facility. JPMorgan upgraded its rating to overweight following the results.

Glaxo warns of hit to regular vaccine business from pandemic

London-listed stocks were flat on Wednesday ahead of the Federal Reserve’s interest rate decision, which happened after UK markets closed. In earnings news, pharmaceutical giant GlaxoSmithKline delivered its latest quarterly report, where it warned that its profits are under threat as patients are holding off on regular vaccinations during the pandemic. While some pharmaceutical stocks have surged due to their involvement in Covid-19 treatments and vaccines, the pandemic has been a double-edged sword for many of the industry’s largest firms, as their other business lines have been hamstrung by people holding off on non-urgent treatments.

In the FTSE 100, clothing names led the way with Next, Burberry Group and JD Sports Fashion closing the day 7.7%, 3.7% and 2.8% higher respectively. At the bottom of the index, banks had a tough day, with Barclays down 6.1% and Lloyds Banking Group down 2.9%, after the former reported its profits for the first half of 2020 fell 66% versus last year.

Close to 100 firms with a market cap of more than $10bn report earnings in the US on Thursday, with Procter Gamble, Mastercard and Ford Motor Company among the highlights not covered in detail below.

Tech giants: Today’s corporate schedule is stacked, with Apple, Amazon, Alphabet and Facebook — the four firms whose CEOs appeared before Congress this week — all reporting quarterly earnings. The antitrust hearings are likely to be a subject on all four firms’ earnings calls. But, given the gains the pandemic has handed to Amazon, the question of how sticky new business won during the pandemic is likely to be for the e-commerce titan will likely feature highly. For Alphabet, questions may center around the state of the digital advertising market and efforts to diversify revenues, while how Facebook is navigating the political minefield of the US presidential election will be crucial for the social networking giant. On Apple’s earnings call, how its new iPhone SE model is faring sales wise will be key. The fact that all four companies, which are four of the stock markets’ five largest, are all reporting in a single day could lead to significant market volatility on Friday when markets open.

Gilead Sciences: Also reporting earnings today after US markets close is biopharmaceutical firm Gilead, which was one of the first pharma names that was associated with treating the Covid-19 pandemic. The firm’s Remdesivir antiviral drug, while not FDA-approved to treat the virus, has been used to shorten the recovery time of some hospitalised patients. It has been handed an emergency use authorisation, allowing hospitals to administer it to treat the disease despite a lack of formal approval. Late last month, the US Department of Health and Human Services struck a deal to buy nearly all of Gilead’s projected production until the end of September. That deal and Gilead’s role in responding to the pandemic will be a major focus of the company’s earnings call. Gilead’s share price is up 12.4% year-to-date, but has fallen 12.2% over the past three months while the broader market has rallied. Currently, Wall Street analysts lean towards a hold rating on aggregate.

Electronic Arts: One clear beneficiary of consumers worldwide being stuck at home is the video games industry. Electronic Arts investors have reaped the rewards, with the company’s share price up 26.4% year-to-date and 47% year-to-date. EA, which makes the popular FIFA, Battlefield and Star Wars games series, among others, reports its latest set of quarterly earnings on Thursday. Analysts will likely probe the games publisher on expectations for its titles linked to major sporting leagues, such as the NFL, given the reduced format in which sporting events are taking place. The launch of the new generation of Xbox and Playstation consoles this year is also a likely topic.

US jobless claims: Last week’s initial jobless claim figure surprised the market by climbing, snapping a 15-week streak of improving numbers. This week’s report will be watched closely as a result, to determine if last week’s data was an anomaly or part of a trend.

The Philippine Bangko Sentral ng Pilipinas has announced it is conducting research into a Central Bank Digital Currency (CBDC), according to Decrypt. It has formed a committee to explore options for a digital currency making it the latest in a line of Asian countries, including Japan and China, looking at the financial technology.

Japan similarly is pushing ahead with its plans. An interview published in The Asahi Shimbun with Japanese central bank director general Takeshi Kimura shed light on the Bank of Japan’s position. Kimura said building a CBDC was the BoJ’s “top priority” and the central bank was now looking to move beyond the initial preparation stage.

CBDCs differ from cryptoassets such as Bitcoin or Ethereum in that they are pegged to fiat currencies of respective nations. Digital bank currencies are designed to improve the speed and security of a country’s existing financial system, rather than develop a totally new form of asset. According to the Bank for International Settlements, 80% of the world’s central banks are now in some stage of development of CBDCs.

All data, figures & charts are valid as of 30/07/2020. All trading carries risk. Only risk capital you can afford to lose