Gold passes 2,000 for 1st time in history as worries grow

On Tuesday the price of gold passed $2,000 an ounce for the first time in history, driven by continued fears of the economic impact of the coronavirus pandemic, and rock-bottom bond yields. The precious metal surged even higher overnight, and is currently trading north of $2,030. 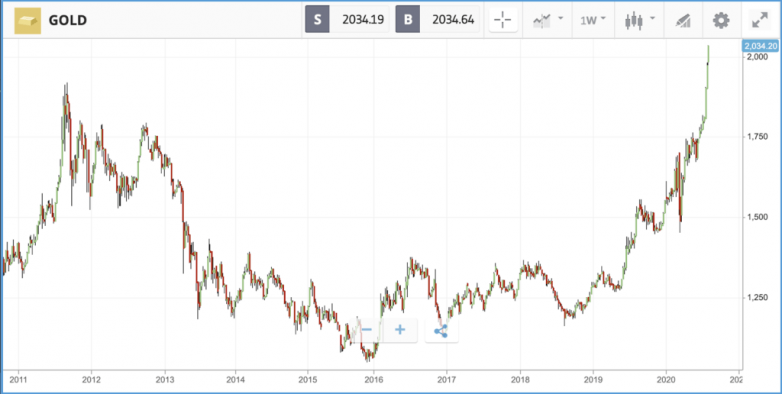 The price of gold has surged by more than 30% year-to-date, with the pace of that increase picking up sharply in mid-July as Covid-19 cases in the US surged. State Street Global Advisors’ SPDR Gold Trust (GLD), the largest gold ETF, has taken in close to $20bn in net new assets in 2020 so far, taking its assets under management to $77.4bn.

In corporate news, Ford announced that it is replacing its chief executive, its fourth in the past 10 years. Current COO Jim Farley will take over from current CEO Jim Hackett on 1 October, after a three-year reign for Hackett during which time Ford lost close to 40% of its market cap. He was brought in to streamline the firm’s operations and increase profits, on which scores he has delivered mixed results, according to The New York Times. Some of the fruits of Hackett’s time in the hot seat will come to fruition after he leaves the firm, such as the Mustang Mach E electric SUV and new Bronco series that brings back a classic brand.

All three major US stock indices finished higher on Tuesday, after reports that Democrats and Trump administration officials have had productive meetings on a new stimulus package. In corporate news, investors in Novavax faced a wild ride in late trading after the company reported data on the Covid-19 vaccine it is developing. The vaccine generated huge antibody responses in test subjects, but investors were thrown by an exaggerated media report on side effects. After hours, the stock fell by more than 30% as investors reacted to the report, then surged back to a 10% gain. The company’s share price is up more than 3,000% year-to-date due to its involvement in developing a Covid vaccine.

In earnings news, The Walt Disney Company reported a quarterly loss of $5bn, but its shares jumped 5% in late trading after revealing it now has 100 million streaming subscribers across its platforms, including 60 million Disney subscribers. The firm had originally set a goal of 60 to 90 million subscriptions by 2024. Theme parks were a major drag on the company’s results, with revenue down 85% to $983m.

With shares down 12% this morning, beleaguered UK lender Metro Bank has reported a GBP240 million loss for the first half of 2020. This is due to provisions to cover loan losses as a result of Covid-19 completely wiping out its profits. The company was in the process of a turnaround plan after an ‘accounting error’ has seen shares in freefall for some time now and this latest setback will be another blow for long-suffering shareholders.

Yesterday, BP dominated business headlines in the UK, with the firm’s share price closing 3.4% higher. The share price pop helped the FTSE 100 over the line to deliver a 0.1% daily gain. Turnaround specialist Melrose industries led the index, gaining 9.4%, followed by BT Group on 8.2% and International Consolidated Airlines Group on 7.1%. In the FTSE 250, easyJet jumped 8.8% after announcing that it has increased its flight schedule to meet growing demand from British holidaymakers.

Square: Merchant services and mobile payments firm Square actually ended up reporting its earnings numbers a day earlier than planned following a leak from a media outlet, but will still be hosting its earnings call on Wednesday. The firm’s stock jumped more than 10% after the numbers were released, as it reported a 64% spike in second quarter revenue year-over-year. Analysts will likely probe management on how the merchant services business is faring as economies re-open – as Square offers contactless payment terminals that are likely to be popular among businesses adapting to Covid-19 safety measures. The stickiness of new customers to its mobile payments, and merchants using its e-commerce services, are also likely topics of discussion.

Regeneron Pharmaceuticals: Pharmaceutical firm Regeneron reports its latest set of quarterly earnings on Wednesday, a day after announcing that its combination antibody-drug combo has both prevented and treated the Covid-19 disease in animal testing. Analysts will likely probe for more information on timescales for new trials and data releases, as the market reaction to the animal trials was somewhat lackluster. Currently, 14 analysts rate the stock as a buy, one as an overweight, 11 as a hold and one as an underweight. Regeneron stock is up more than 70% year-to-date.

Glencore: London-listed commodity trading and mining company Glencore is expected to deliver a bumper set of results on Thursday, as chaotic oil markets and soaring commodity prices have provided ample opportunity for the firm to capitalise. Unlike straight miners, Glencore has multiple avenues to generate revenue, with its trading arm helping it out during volatile periods for commodity prices. The firm’s share price is still down 22.4% year-to-date, and a key piece of the Thursday earnings report will be whether Glencore intends to stick to its planned dividend payments.

Investing patterns have differed dramatically across age groups during the crisis, according to JP Morgan, with older investors backing gold while young ones turn to Bitcoin.

Millennials are also targeting stocks while their parents dump equities and turn to bonds, according to JP Morgan strategist Nikolaos Panigirtzoglou. In a note written on 4 August, the strategist remarked: “The older cohorts continued to deploy their excess liquidity into bond funds, the buying of which remained strong during both June and July.”

Both gold and Bitcoin ETFs have experienced strong inflow this year, hence the rally for the gold price in particular. But interest in Bitcoin is clearly on the up too, with the futures market on the Chicago Mercantile Exchange (CME), one of the few regulated Bitcoin futures exchanges, at a record high with $830 million-worth of contracts in place.