Amazon founder and CEO Jeff Bezos has sold more than $3bn worth of Amazon stock, after the company’s share price surged 36% in the past three months and 73% in the year-to-date. That adds to the $4.1bn in stock he sold earlier this year, per CNBC, although his remaining $170bn stake still makes him the richest person in the world. The sales eclipse the amount of stock he unloaded last year, and the level is well beyond the $1bn worth he said he would be selling annually to fund space exploration company Blue Origin. 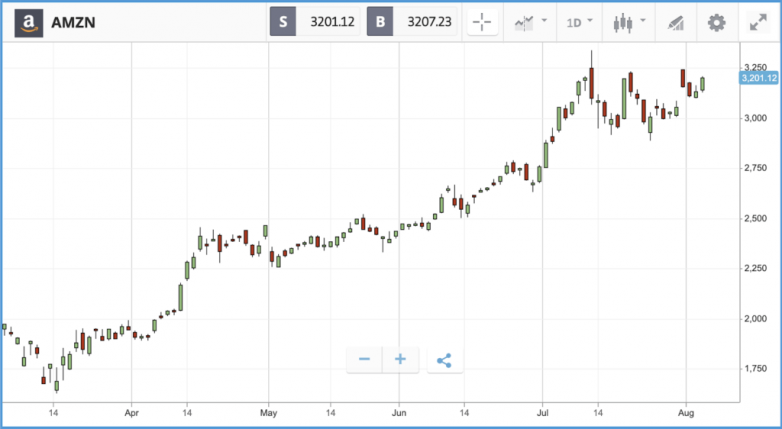 Tech giants dominated headlines on Wednesday, with Twitter and Facebook making a splash after taking down a video of President Trump falsely claiming that children are “almost immune” from Covid-19. Facebook also announced that it is launching a rival to TikTok under its Instagram brand, called Instagram Reels, as Microsoft continues to pursue an acquisition of TikTok’s US operations.

Elsewhere, gold continued to be in favour as it trades comfortably above the $2,000 mark, close to $2,050 at time of writing. US futures are fairly flat as investors wait on a further fiscal stimulus package from Congress. The UK’s FTSE is trailing today, down just under 1% after an early morning Bank of England meeting highlighted that the post pandemic recovery may be slower than expected and warned of the dangers of entering negative-rates territory.

The Dow Jones Industrial Average soared on Wednesday, led by The Walt Disney Company which closed 8.8% higher after its stellar streaming subscriber numbers outweighed fears of losses from its theme parks. Boeing also enjoyed a big day, finishing 5.6% higher and climbing further in after-hours trading, after Boeing CFO Greg Smith said at a conference that the company won’t need to raise more cash to weather the current storm it faces, and that as sales recover paying down debt will be a priority. In the S&P 500, American Airlines helped take the index higher, climbing 9.5%, as airlines rallied across the board on news that additional support to help companies sustain payrolls during the pandemic, might be included in the next round of stimulus legislation. In earnings news, Regeneron Pharmaceuticals stock sank 3.7% after initially opening higher following an expectation-beating earnings report. Investors took their chance to take profits, after the company’s 60% plus share price gain this year.

International Consolidated Airlines Group led the FTSE 100 higher on Wednesday, adding 10.5% to its market cap, followed by miner Evraz at 9% and Coca-Cola HBC at 8.1%. Glencore also delivered a big day ahead of its Thursday earnings report, joined by mining peers Polymetal International, Fresnillo, BHP Group and Anglo American. All of the firms gained between 4.7% and 7.5% on Wednesday, as the price of gold continued to move higher after surpassing $2,000 an ounce. The FTSE 100 climbed 1.1%, but has effectively been flatlining since late May. In the FTSE 250, insurer Hastings Group was flat, after its biggest shareholder Sampo Group announced it is making a cash offer to buy Hastings outright, at a premium of its 37.5% to the company’s average share price for the three months ended July 28. Gambling firm William Hill also delivered a solid day, closing 8.9% higher after reporting a jump in its US market share and surging international revenue.

T-Mobile: Having just completed the integration of the T-Mobile and Sprint brands, T-Mobile reports quarterly earnings on Thursday, where analysts are likely to probe management on aggressive promotional pricing and the progress of its 5G network rollout. The company’s share price is up close to 40% in 2020, taking its market cap to $134bn. Wall Street analysts still expect the pandemic to have put a significant dent in Q2 profits, but lean towards a buy rating on the company’s stock.

Uber: While many tech stocks have soared during the pandemic, which accelerated trends that played in their favour, Uber has been on the receiving end of recent disruption, as lockdowns decimated ride requests. Analysts will be probing for signs of recovery as many economies are now reopening, and the company’s food delivery business will be a key point of focus. During the quarter, Uber announced a deal to buy rival food delivery service PostMates, after failing to secure a deal to acquire GrubHub. Despite the disruption, Uber stock is up 11.6% year-to-date, and analysts overwhelmingly rate the stock as a buy.

Bristol Myers Squibb: New York-based pharmaceutical company Bristol-Myers Squibb reports earnings on Thursday, the day after securing a patent win for it and Pfizer, which have a profit sharing agreement on a blood-thinning drug. A judge found that products made by multiple firms had infringed upon the patents. BMQ stock surged 5% in after-hours trading as a result, taking its year-to-date return to negative 7%. Analysts expect the company to deliver a Q2 earnings-per-share figure of $1.48; the firm has beaten earnings expectations significantly in the last few quarters.

A Chinese billionaire has warned that flooding in central China threatens a large proportion of its Bitcoin miners. Exiled billionaire Miles Guo warned the collapse of the Three Gorge Dam, the largest dam in the world, was “imminent” thanks to flooding.

Some 50% of the world’s Bitcoin miners are in China, with 64% of those located in Sichuan province, according to Bitcoin.com. The major recent flooding then poses a significant existential threat to the region’s miners. By the end of June some 744,000 people from 26 Chinese regions have been displaced by serious flooding.

However, the flooding makes mining cheaper for Chinese outfits, assuming their operations aren’t destroyed. Chinese electricity supplies rely heavily on hydroelectric power, so when large water flows are present the cost of electricity plunges for the miners, making the process more profitable for them.

All data, figures & charts are valid as of 06/08/2020. All trading carries risk. Only risk capital you can afford to lose.