US firms dealing with Chinese apps put on 45 days notice

US President Donald Trump has issued two executive orders giving US companies 45 days’ notice to stop dealing with Bytedance, owner of now-infamous social media app TikTok, and WeChat, a Chinese messaging platform owned by Tencent. Asian shares tumbled on the news of the orders as the move signifies a major escalation of the situation from rhetoric to action. Tencent’s shares fell by as much as 10% on the news while Alibaba was down 6.4%. 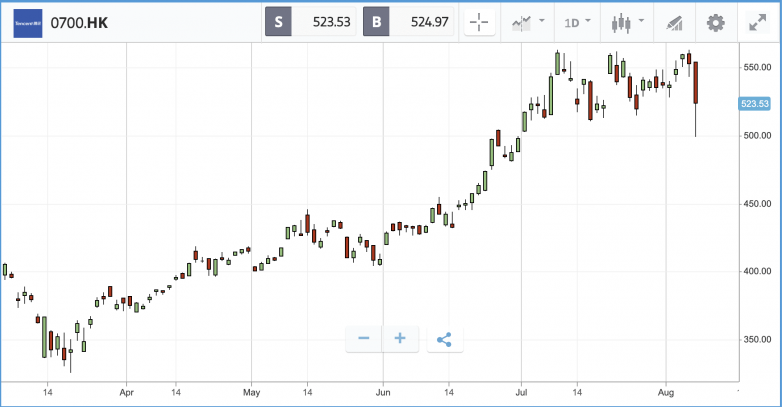 The White House also signalled its intention to force Chinese firms listed on US stock indices to submit to US audit requirements. Failure to comply, according to the plan, will result in the Chinese firm being ejected from their respective US index. Under the plans, companies have until 2022 to obey the new rules. Chinese firms that aren’t yet publicly traded but intend to list would have to comply preemptively with the new policy.

US markets were up modestly on Thursday as fresh jobless data showed fewer people than expected seeking employment benefits. The tech-heavy Nasdaq closed up 1% at 11108.07, a record high, the fourth consecutive record close. Meanwhile the S&P 500 rose 0.6% and the Dow Jones was up 0.7%. The Nasdaq was led higher by ADiTx Therapeutics, up 93.4%, on the news it had developed a coronavirus test that was capable of differentiating between different types of antibody.

The biggest winner in the S&P 500 was MGM Resorts International, rising 10.4%, as it announced its hotel casino tenants were paying rent on time and in full. Facebook’s stock was also up a healthy 6.5% on the back of the ongoing saga between Trump and TikTok, as it announced a new feature on its Instagram platform called ‘Reels’, which appeared to be a play at TikTok’s main features. Facebook has form for copying and improving upon competitors’ USPs, most notably copying stories from Snapchat in 2016. The biggest mover in the Dow Jones was Apple Inc, up 3.5%. On the days Apple released its new Big Sur Mac operating system to beta users for testing.

UK stocks down on weak Bank of England data

Both the FTSE 100 and 250 were down on Thursday on the back of weak data from the Bank of England. The UK’s central bank held interest rates at a nominal 0.1% but said it expected the drop in GDP for 2020 to not be as bad as expected at -9.5%. However, it also warned the recovery would take longer, with lost output recovered only at the end of 2021. The Bank also warned of high unemployment with the rate reaching 7.5% – or an extra 2.5 million people out of work.

US employment report: The US employment numbers during the coronavirus crisis have been essential reading for updates on the health of the economy. The latest employment report is different from jobless numbers reported yesterday in that it counts the number of people actively employed rather than those who are claiming social security benefits for the first time. As such the employment report gives insights into how the world’s biggest economy’s businesses are faring on staff. The numbers have shocked and surprised at every step of the crisis, from the enormous job losses early on to the unexpected job gains that followed. Analysts are concerned that the latest figures may show a slowdown in new jobs added in July and might also show fresh losses. The US economy has struggled along while authorities battle to contain the spread of the virus. A spread from 600,000 fewer in employment to 1.5 million more is currently expected.

Saudi Aramco: The world’s largest company by market capitalisation reports Q2 figures on Monday, in a set of results that will paint a picture of how the oil crisis inside the wider pandemic unfolded for the world’s largest oil producer. The results will also interest geopolitical analysts looking to gauge how Saudi Arabia will behave in future in relation to the oil price war that took place in the crucible of the crisis in March. The firm’s profits already took a 25% hit in Q1 thanks to just 13 weeks of lower output, so Q2’s results will likely be worse.

Crypto corner: Goldman Sachs looks to its own crypto token

Goldmans Sachs, one of the largest investment banks in the world, has expressed an interest in creating its own cryptoasset, according to CNBC.

The firm’s new head of digital assets, Matthew McDermott, has confirmed it is exploring whether or not to launch its own cryptoasset, saying: “We are exploring the commercial viability of creating our own fiat digital token, but it’s early days as we continue to work through the potential use cases.”

He added: “In the next five to 10 years, you could see a financial system where all assets and liabilities are native to a blockchain, with all transactions natively happening on chain.”

McDermott confirmed he was already looking at how a digital asset could help improve the efficiency of the famously inefficient repurchase or “repo” market. Banks and hedge funds rely on the repo market for short-term funding, with around $1 trillion moving through the system every day.

All data, figures & charts are valid as of 07/08/2020. All trading carries risk. Only risk capital you can afford to lose