Over the weekend it was reported that social media firm Twitter has held initial talks about a possible deal to acquire TikTok’s US operation, something that Microsoft has spent weeks negotiating — both with TikTok parent ByteDance and the White House. With a market cap 50 times the size of Twitter’s, Microsoft has much deeper pockets and is still very much the front runner. TikTok’s US operations could end up being valued at more than Twitter itself, raising financing concerns, but The Wall Street Journal noted that the firm’s smaller size would mean it would face less antitrust scrutiny. Twitter’s share price is up 15.6% and pre-pandemic, the firm had been delivering a regular profit, although it slumped to a billion dollar plus loss in the three months to the end of June.

Microsoft’s CEO Satya Nadella has already discussed a potential deal with President Trump, who has set a deadline of 15 September for TikTok to end its US operations unless it is acquired by “a big company, a secure company, a very American company.”

European markets are up this morning as Chinese industrial data came in better than expected overnight showing some encouraging signs that recovery could be on its way back to pre-pandemic levels. Leading the way is the commodities-heavy FTSE100 buoyed by oil giants BP and Royal Dutch Shell after Saudi Aramco made upbeat comments about a rise in energy demand from Asia. 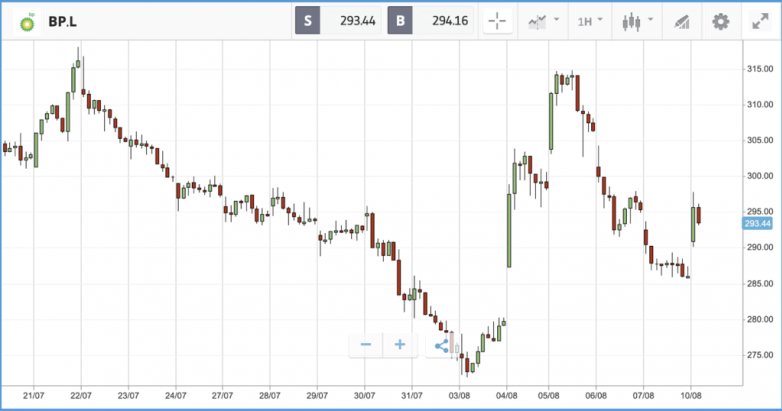 The three major US stock indices continued pushing higher last week, with the S&P 500 now within 1% of its record high and the Nasdaq over 11,000 points for the first time in history. US stocks had a muted end to the week, however, as the monthly government jobs report showed the economy added 1.8 million jobs in July, below the number added in both June and May. Based on the companies that have reported so far, Q2 earnings season has gone better than anticipated. FactSet analysts had projected an earnings decline of 44%, but have revised that to 34%.

It was the Dow Jones Industrial Average that led the way last week, adding 3.8% to take it within 4% of where it started the year. The Walt Disney Company and Boeing were two of the week’s biggest winners, adding 11.1% and 7.6% respectively. The Nasdaq Composite’s gains were tempered on Friday, as it fell 0.9% while both the Dow and S&P 500 eked out positive days. Illumina was the day’s biggest loser, as the $52bn market cap biotech company closed the day 10.9% down after missing earnings expectations and reporting that many of its customers’ operations remain closed due to the pandemic.

In the UK, both major stock indices made substantial gains last week, with the more internationally focused FTSE 100 up 2.3% and the FTSE 250 up 4.1%. On Thursday, the Bank of England forecast that the UK economy will contract by 9.5% this year, below the 14% it had projected in May, although it predicted the recovery will be slow. This resulted in GBP strengthening and actually slowed down the gains of the foreign-earning FTSE 100 in comparison to its more domestic mid cap counterpart.

In the FTSE 100, online real estate service Rightmove, turnaround specialist Melrose Industries and Hikma Pharmaceuticals were the week’s biggest winners, with all posting double digit gains. At the bottom end, Diageo fell the furthest, sinking 10.2% after reporting that its profits and sales have plunged during the pandemic. The company also held firm on its dividend payment, at a time when many other companies have been cutting back on payments to shareholders.

In the FTSE 250, gambling firm William Hill enjoyed the best week, adding almost 30% to its market cap, while insurer Hastings Group and retailer Pets At Home also made 20% plus gains. Shopping center operator Hammerson suffered a particularly rough week, falling by more than 20% after reports that it is in talks to raise cash, including selling off a division, as tenants continue to withhold rent.

Barrick Gold: While the price of gold has soared from $1,500 an ounce at the start of the year to more than $2,000 now, many gold miners have ridden that wave to even greater heights, as the higher price greatly expands the profit margins they are able to generate. Barrick Gold, a $51bn market cap New York-listed miner, has added more than 55% to its share price in 2020. The firm reports earnings today, where the impact of the pandemic on production is likely to be one focus of analysts. Currently, 12 Wall Street analysts rate the stock as a buy or overweight, seven as a hold and one as an underweight.

Marriott International: Hotel giant Marriott has been directly in the pandemic firing line, with both business and pleasure travel at a near standstill worldwide. The company’s share price is down 38.1% year-to-date, although it mounted something of a comeback last week, rallying 11.9%. Recovery in booking numbers in markets where economic reopenings are more advanced — such as Asia — and plans for handling the surging US case numbers, are likely to be key parts of the firm’s earnings call today. Wall Street analysts overwhelmingly favour a hold rating on the stock.

Tencent Music: Tencent Music Entertainment (TME) group is a New York-listed music streaming company that was formed as a joint venture between Tencent and Spotify. The firm has hundreds of millions of active users in the Chinese market, including 120 million paying subscribers. As with many other streaming services, the pandemic has helped boost TME stock, which has added 36.5% in 2020. The company is aiming to convert more of its listeners into paying subscribers, by putting some releases behind a paywall, which it says has yielded encouraging results. TME reports its latest quarterly earnings this morning.

A weak dollar may be inbound, what will benefit?

One pandemic impact that is likely to continue is the weakening of the US dollar. Economic downturn, trillions of dollars of government spending and near-zero interest rates are all combining to put pressure on the world’s main reserve currency. A weaker dollar has several potential effects on investors. American firms that do business abroad benefit from a favorable translation of overseas earnings into US dollars, so firms that are well diversified globally tend to do comparatively well. On the flip side, a weaker dollar makes imported goods more expensive for American consumers — which, among other things, affects retailers’ margins. Gold has also rallied over the past month while the dollar’s value has fallen.

Another asset class that traditionally does well when the dollar is weaker and US interest rates are low is emerging markets, as it makes the higher bond yields and growth potential that those markets offer more attractive compared to the US market. Whether that will be the case this time, given the devastation the pandemic has unleashed upon many emerging markets, remains to be seen.

The New York State Department of Financial Services (NYSDFS) has approved 10 cryptoassets for sale, trade and custody — including Bitcoin, Ethereum and XRP — according to CoinTelegraph.

The news means any entity based in New York state may now conduct its business in the aforementioned cryptoassets for their approved purposes. However, any company wishing to use the cryptoasset must inform the NYSDFS first. It also has the authority to remove any of the tokens from its list at any time.

All data, figures & charts are valid as of 10/08/2020. All trading carries risk. Only risk capital you can afford to lose.