European shares have followed on from Asia’s positive session overnight as markets seem to shrug off the latest US-China tensions. An initial review of the Phase one trade deal will begin on Saturday and investors will be hoping that the uneasy relations between the two nations does not adversely affect anything trade related. The UK’s FTSE is up over 1.5% despite employment numbers showing the worst job losses in over a decade, although the overall unemployment rate came in ahead of consensus at 3.9%.

Following President Trump’s tweet indicating renewed talks with Democrats over further coronavirus related government aid, oil prices are back within touching distance of the five month high seen intraday earlier this month. This continues the momentum from yesterday’s Aramco comments regarding a resurgence in demand. Royal Dutch Shell and BP are on for their second day of gains up 2.8% and 3.4% respectively. 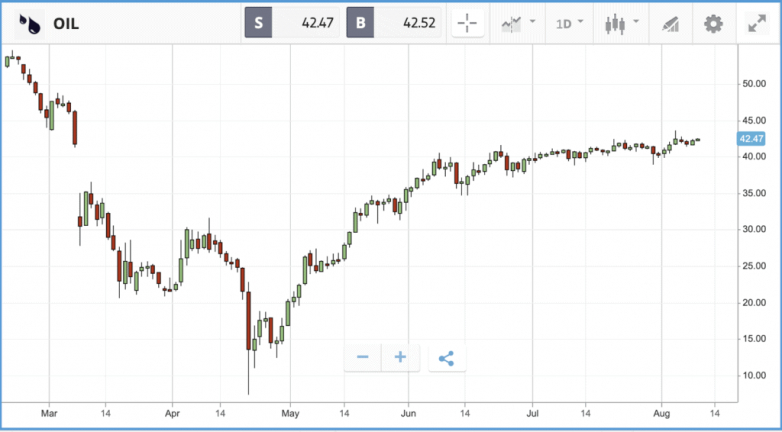 Elsewhere yesterday, a California judge passed down a ruling that means Uber and Lyft have to stop treating their drivers as independent contractors until further action by the court. The two firms have 10 days until the order comes into effect, and there will be an appeals process, but if the decision becomes permanent it will have major implications for how they are able to operate in the state. California is a big market for both companies, as Lyft has over 325,000 drivers in the state and Uber has 200,000.

The switch from treating drivers as independent contractors to employees comes with a raft of obligations on behalf of the company, such as paid sick leave, and will afford drivers the same labour rights as any other employee in the state. All of that could prove highly costly for both firms, which are still fighting to become profitable. California is far from the only jurisdiction ride-hailing companies are facing legal problems in. Uber has faced bans in London and Germany, and was fined $649m in New Jersey for misclassifying its employees.

The Dow Jones Industrial Average jumped again to start the week, closing 1.3% higher, led by Boeing, which added 5.5%. Boeing stock is now up 39% over the past three months, although it remains more than 40% off where it started the year.

In corporate news, McDonald’s filed a suit against ex-CEO Steve Easterbrook, alleging that he engaged in sexual relationships with multiple employees and then attempted to cover them up. Easterbrook is accused of sending nude photographs, including of company employees, from his work email account to his personal email account.

The S&P 500 closed out Monday 0.3% higher, with its year-to-date gain now standing at 4%. Travel related stocks led the index higher, with MGM Resorts, Royal Caribbean and Wynn Resorts all posting double digit gains. United Airlines also added 9.4%, while Carnival and Norwegian Cruise Lines both rose more than 8%. The firms were buoyed by news that the Transportation Security Administration recorded more than 800,000 passengers at checkpoints on Sunday for the first time since March.

Cineworld leaps on US takeover speculation

Both the FTSE 100 and FTSE 250 started the week on a positive note, adding 0.3% and 0.6% respectively. In corporate news, Unilever hit headlines, after setting the weekend of November 21 and 22 as the date for the unification of its structure under a single parent company, headquartered in London. After that date, Unilever stock will only trade in London, with Unilever NV shares — which trade in New York and Europe — ceasing to trade. One single share class will remain, with the company incorporated only in the UK. This year, the firm has become the FTSE 100’s largest constituent, as its share price has gained 3.9% in 2020 while the broader market remains 20% down year-to-date.

Yesterday, International Consolidated Airlines Group rode the same wave of travel sector optimism the US market enjoyed, adding 8.7% and leading the FTSE 100. The FTSE 250 was led by Cineworld Group, which jumped 17.6% after a US court ruling terminated rules that restricted Hollywood’s ownership of the production, distribution and display of movies, opening up the possibility a large production house will look to buy up cinema chains. Currently, Cineworld has around 500 cinemas in the US.

Sysco: Sysco, a $31bn market cap wholesaling firm for food products and kitchenware, reports its latest set of quarterly earnings today. The firm’s share price is down 30% year-to-date, after a 15% rally last week, in part due to the blow dealt by the pandemic to the restaurant industry, which is a major chunk of its business. Analysts will likely probe management on demand from restaurants with states across the US in various phases of reopening, including a variety of restrictions depending on location. Analysts are expecting the company to post a $0.30 per share loss for the latest quarter, and are split ratings wise, with five buy ratings, four holds and one sell.

Broadridge Financial Solutions: Broadridge provides communications, technology solutions, data and analytics to the financial services industry, where it has a near monopoly on the investor communications business. The firm’s services range from distribution analysis and support for asset management companies to customer insight for banks. While the pandemic has badly hurt the financial services sector share price wise, as near-zero interest rates hit margins, Broadridge has held up well. It is up over 10% year-to-date, as its tech driven solutions match up well to a virtual world. The firm reports quarterly earnings today. Currently, analysts favour a hold rating on the stock.

NIO: Chinese electric car maker NIO, which has a New York listing, delivers its latest quarterly earnings update today. The company’s share price has surged by 250% year-to-date, and 366% over the past 12 months, and the pressure is on management to justify the valuation. Recently, the firm secured a billion dollar funding deal, not long after there were reports of delays in staff getting paid. In July, the company delivered more than 3,500 vehicles, a 322% increase on July. The company has delivered 17,702 vehicles in 2020 so far, a 111% increase on the same period last year. NIO offers electric SUVs at different size points.

Both Argentina and Brazil have posted record high Bitcoin trading volumes as their own fiat currencies collapse in value, according to Decrypt. Both countries face severe economic conditions thanks to coronavirus and underlying weaknesses in their economies.

Argentina in particular has seen a 169% trading growth in Bitcoin over the last two months. This is thanks largely to currency controls imposed by the government in the ailing nation, with Argentines averse to keeping their savings in the local currency.

Likewise in Brazil, trading is up 20% and in Turkey, where the lira has lost huge levels of value in recent weeks, it is up 5%. The Brazilian real has devalued by 30% against the dollar since May.

All data, figures & charts are valid as of 11/08/2020. All trading carries risk. Only risk capital you can afford to lose