Markets have continued their positive sentiment after yesterday’s rally with European shares opening higher and US futures pointing towards a positive open. Tech has really been the star of the show in recent weeks; the Nasdaq is set to make another record high with investors also anticipating a stimulus package from the US government. Gold is off this morning as the dollar manages a small rebound against the Euro and Sterling.

Zoom Video Technologies stock soared higher still yesterday after revealing a staggering jump in revenues on Monday night after market close. The video conferencing firm has taken the business world by storm since the pandemic hit, with its revenues up 355% in the three months to end of July, smashing forecasts. The stock rocketed more than 40% higher on Tuesday, with its one-month return now at 71% and its year-to-date figure at 572%. 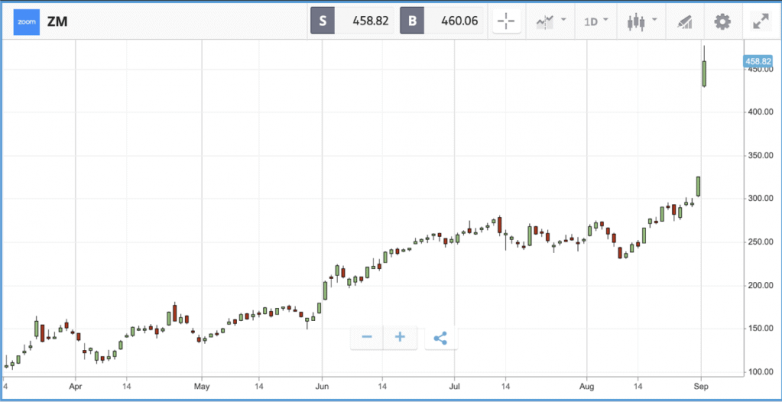 Elsewhere Tesla, which has also enjoyed mammoth gains this year, announced plans to sell up to $5bn in stock to raise capital, taking advantage of its huge rally to fund its operations. Webush analyst Dan Ives told CNBC that CEO Elon Musk is raising enough capital for Tesla to “slowly get out of its debt situation, which throws the lingering bear thesis for Tesla out the window for now.” The move spooked investors nonetheless, coming just a day after its stock split, with shares down 4.7% yesterday as many took the opportunity to lock-in gains.

All three major US stock indices delivered a solid Tuesday, with the Nasdaq Composite leading the way, closing the day 1.4% higher. One factor helping sentiment was manufacturing sector data from major economies globally, which showed demand rebounding. In the US, one measure of manufacturing activity from the Institute of Supply Management showed the sector’s expansion rate at a near two-year high.

Of the largest 100 Nasdaq Companies, Netflix delivered the best day, with JD.com and Apple also enjoying significant bumps. Streaming giant Netflix closed the day out 5.1% higher on the back of positive analyst sentiment. Royal Bank of Canada analyst Mark Mahaney increased his price target on the stock, noting that the level of profitability and sustainable growth it has achieved is not currently reflected in its share price.

In the Dow, Walmart led the way with a 6.3% gain following the launch of its new Walmart membership program, through which the world’s largest private employer looks set to take on Amazon’s Prime service.

The FTSE 100 slumped by 1.7% yesterday following the long weekend, with its loss over the past five trading days now at 4%. While US stocks have rallied in recent months, the trajectory of the UK’s largest companies have struggled to recover from the pandemic-induced sell-off. Over three months, the index is down 4.9%. Banking and finance names littered the bottom of the FTSE on Tuesday, with Barclays, NatWest and Lloyds all down 5% or more. The day’s biggest loser however was Rolls Royce, whose share price sank double digits after the firm announced a billion pound plus loss in the first half of the year. For the full year, the aerospace firm said it expects revenue to be down by up to 30%, although CEO Warren East noted that the firm’s huge restructuring will “significantly reduce our cost base,” and pointed to resilience in its defence business.

The FTSE 250 sank 1% at the start of the shortened trading week, with travel names including easyJet and National Express in the red following the introduction of new restrictions on travellers coming into Scotland from Greece.

Crowdstrike: Cyber-security firms have been one of the major beneficiaries of the pandemic as businesses’ security needs have shifted dramatically with most employees working from home. US company Crowdstrike, whose website bears the slogan “we stop breaches”, has ridden that wave to a 188% share price gain in 2020 so far. The turnaround is a remarkable one for a company that halved in value during the second half of last year, after a successful IPO months before. The company reports its latest set of quarterly earnings today. Investors are anticipating big numbers, and piled into the stock yesterday, sending it 14.3% higher in market hours and a further 7% in post-close trading. Currently, 16 Wall Street analysts rate the stock as a buy, five as a hold and one as an underweight.

Brown-Forman: Wine and spirits giant Brown-Forman is the company behind brands including Jack Daniels, Woodford Reserve, Finlandia vodka and many more. The firm’s share price is positive year-to-date, despite it losing out heavily due to bar and restaurant closures across many major economies, including the US. While some of those restrictions have relaxed, investors will be watching closely today — when the company reports quarterly earnings — for whether sentiment has outstripped sales. Currently, analysts overwhelmingly favour a hold rating on the stock.

ADP National Employment Report: Payroll service provider ADP’s monthly report on the private jobs market in the US will be released today, ahead of the Bureau of Labor Statistics’ main job report on Friday. Per Trading Economics, expectations are for ADP to have registered 950,000 jobs added to the private sector in August, after 167,000 were created in July.

Bitcoin miners saw revenues surge 23% in August as increased transaction volumes fed through to prices, and as the price of Bitcoin remained above $11,000.

Coin Metrics data analysed by CoinDesk showed Bitcoin miners generated an estimated $368 million in revenue in August, up from $300 million in July. It is the third consecutive monthly increase in miner revenue and was given a lift from network fees which totalled $39m in August.

Miners are enjoying the benefits of the higher price, with Bitcoin climbing above $11,000 back at the end of July and holding above that level throughout the last month.

Ethereum also continues to surge; the price of the second largest cryptoasset by market cap shot higher at the end of August to trade at $466 and is up more than 300% since the March low point.

All data, figures & charts are valid as of 02/09/2020. All trading carries risk. Only risk capital you can afford to lose.