Stock market indices around the world plunged yesterday as investors heavily sold down tech stocks, with Tesla, Apple, Microsoft and more on the receiving end. Investors large and small moved to take profits after weeks of consistent share price gains. On Wednesday it was reported that Scottish investment firm Baillie Gifford, Tesla’s largest external shareholder, had slashed the size of its holding in the company almost in half. Tesla stock fell 9% on Thursday, while Nvidia was down 9.3%, Apple 8% and Microsoft 6.2%.

Asian stocks followed suit overnight but losses were less severe, with the Nikkei down 1% and the Hang Seng down 1.3%. European shares have had a muted open, trading slightly one or two tenths up as markets eagerly await the potentially key US jobs report (more below). US futures are mixed with the Dow and S&P showing very modest gains but the tech heavy Nasdaq has experienced further selling pressure following on from yesterday, down 0.3%. 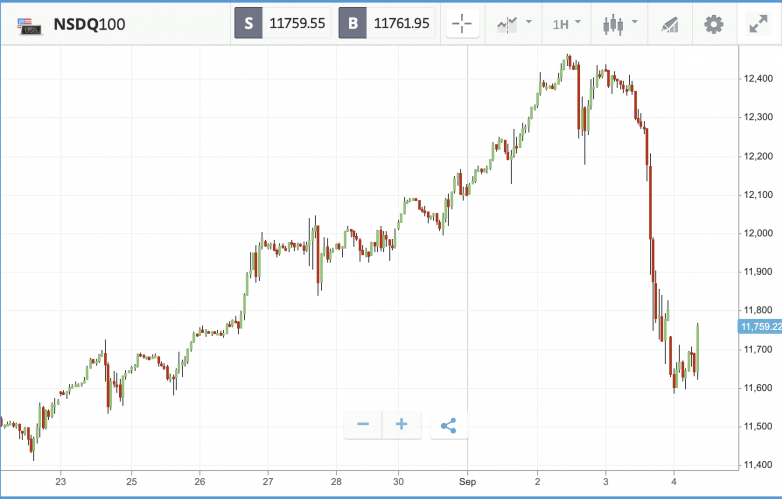 Docusign slumps despite 60% increase in billing

The tech-heavy Nasdaq Composite fell hardest among the major US stock indices yesterday, ending the day 5% lower, while the Dow Jones Industrial Average was only off by 2.8%. Verizon Communications and American Express were the only two names of the 30 in the Dow to deliver a positive day. In earnings news, expectation beating results DocuSign and Broadcom failed to help the firms escape the broader sell-off. Digital contracts firm Docusign’s quarterly results, in which CEO Dan Springer said he does not anticipate a reversion to paper processes once the pandemic is over, include a 60% increase in billing during the first half of the year. Having fallen 8.7% during market hours, the stock fell another 10% in after-hours trading, although it remains up 73% over the past three months. Software and chip firm Broadcom reported revenue up from $5.2bn to $5.8bn year-over-year, towards the top end of its forecast range, but it similarly sank both during market hours and in late trading.

Meanwhile all 11 sectors in the S&P 500 were in the red, the sell-off was heavily concentrated in technology names. Overall the index was down 3.5%, but the information technology sector fell 5.8%, while some of the year’s more beaten down sectors fared better. Energy stocks were only 0.7% down on aggregate, while financials were down 1.6%. Cruise firm Carnival, investment firm Invesco – which is down 38% year-to-date – and clothing retailer Ralph Lauren led the S&P, gaining 5.2%, 4.8% and 3.6% respectively.

Both the FTSE 100 and FTSE 250 sank on Thursday, although not to the extent of their US counterparts given the UK’s relatively short set of listed technology names. The FTSE 100 was down 1.5%, with investment trust Scottish Mortgage the biggest loser due to its mammoth stake in Tesla and other tech companies. Miners delivered a poor day too, with BHP Group, Evraz, Glenor and Anglo American all off by more than 4%. Investors had new data on the state of the UK services sector, which is a dominant part of the economy, to digest. IHS Markit’s UK services purchasing managers’ index came in at 58.8 for August, an increase on July’s 56.5 (a reading of more than 50 indicates expansion). According to Morningstar, service providers highlighted pent up housing market demand, spending driven by the government’s Eat Out To Help Out scheme and a recovery in business service demand.

Note: US stock markets are closed on Monday due to a public holiday.

Jobs report: With minimal earnings news, all eyes will be on August’s US jobs report from the Bureau of Labor Statistics on Friday. The report will include data on nonfarm payrolls – a measure of the number of US workers excluding farm and some other worker types – plus the unemployment rate and average hourly earnings. Economists surveyed by Bloomberg are anticipating 1.37 million new nonfarm jobs to be reported, down from the 1.76 million added in July. However, a private sector jobs report from payroll service provider ADP delivered on Wednesday came in well below expectations. The unemployment rate is also anticipated to drop down to 9.8%, its first single digit reading since April, although still multiple times higher than where it was before the pandemic hit.

If the figures come in as expected, they will affirm that the US recovery is continuing, but the rate of improvement is slowing. Worse than expected unemployment or nonfarm payroll figures could dent hopes of a rapid economic recovery, likely hurting stocks in cyclical sectors such as financial services and energy.

Crypto corner: Cryptoassets not immune from the selloff

Bitcoin reached an early high on the day of $11,474 but as markets took heed of the widespread selloff it plunged some 9%, reaching a low of $10,005. The psychologically important $10,000 level has managed to hold thus far and in early trading today the price is moving back up to around $10,285. Another contributing factor could be the raid on South Korean exchange Bithumb, this could well have triggered a mass exodus from the platform and a lot of selling pressure.

Meanwhile, Ethereum was worst affected by the selloff, down some 11% in the past 24 hours. It reached a high of $438 before slumping as low as $370. This morning it is trading around the $387 mark.

All data, figures & charts are valid as of 04//09/2020. All trading carries risk. Only risk capital you can afford to lose