After poking its head above $12K for the fourth time, Bitcoin fell over 10% on Thursday in the steepest drop since early March.

Several events contributed to pulling the rug out from under the market. These include the raiding of the biggest exchange in South Korea by the police, and the offloading of Bitcoin by miners, who sent unusually large amounts of the cryptocurrency to exchanges before the market changed direction. 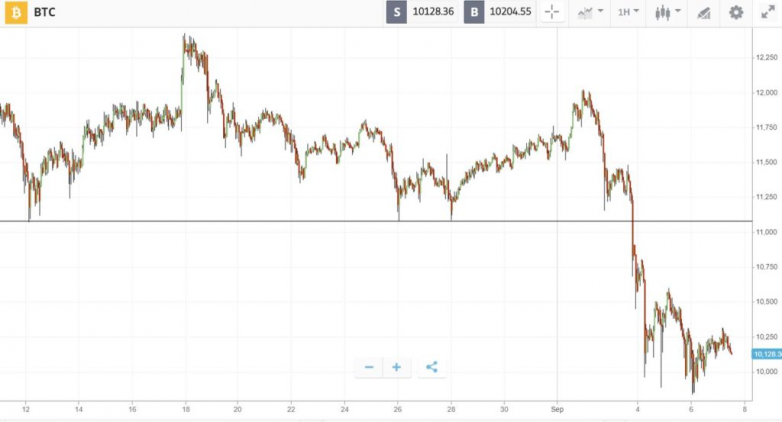 Ethereum suffered more than most in the downturn, falling from a high above $480 to a low around $310 before bouncing to $350. Among large-cap altcoins, Tron was the only cryptocurrency to buck the trend, making high single-digit gains.

While the rest of the crypto market has been rocked by the storm, Tron has stayed on course — making gains of almost 9% over the past week.

This resilience could be due to the coin’s growing role in DeFi. Founder Justin Sun recently announced a string of DeFi-related partnerships, and revealed new developments in protocols promising to bring higher throughput and lower fees to the nascent ecosystem.

Meanwhile, Tron contemporaries NEO and EOS have moved in the opposite direction. Both cryptocurrencies are showing more than 9% losses over the past week.

Crypto Cozies up to Stocks

September has historically been a disappointing month for the stock market, and 2020 appears to be no different. The euphoria that pushed the S&P 500 to record highs has now subsided, giving way to uncertainty over the upcoming presidential election.

This changing sentiment could be to blame for falling cryptocurrency prices, with Bitcoin following the stock market down in a repeat performance of the Black Thursday crash.

As a result, correlation between the two asset classes is soaring, according to data from Coin Metrics.

Although the sudden drop has swung the market sentiment gauge back to fear, this downturn is not entirely unusual. In the last bull market, Bitcoin went cliff diving several times on its way to the top, often falling 30-40% before resuming the climb.

According to one executive, Labor Day could mark the beginning of the next stage of the crypto bull market. Back in August, veteran investor George Ball said Bitcoin could “ignite” after the holiday as traders return from summer vacations and realize the central bank liquidity flooding the stock market can’t last forever.

In the short-term, Bitcoin traders are likely to be watching for a break of $10k to see if further downsliding is likely.