Stocks wobble as US stimulus is voted down

Major US indices took another tumble yesterday after a relief package to counter the economic damage from the coronavirus was voted down in the US Senate.

The $500bn package – already scaled back from previously proposed versions – would have provided $250 billion for another round of Paycheck Protection Program loans, just under $50 billion for COVID-19 testing and vaccine development, and over $100 billion for schools. It also would have forgiven a $10 billion loan to the United States Postal Service and boosted weekly enhanced unemployment benefits by $300.

However, the stimulus package received just 52 votes in favor, all from Republicans, versus 47 opposed votes from Democratic Senators and Kentucky Republican Rand Paul. The bill needed 60 votes in favor to move forward.

In reaction, tech stocks resumed their slide once more yesterday, but it was energy companies that faced the toughest day. Of the 11 sectors in the S&P 500 index, energy names fell hardest with a 3.7% loss, versus 2.3% for information technology stocks and 1.8% for consumer discretionary.

This morning US futures are signalling that markets will pare some of these losses with the Dow Jones up 0.6%, the S&P up 1% and the tech-heavy Nasdaq up 1.6%.

A plunge in the price of oil and its impact on the energy sector has been largely overshadowed by volatility among the tech giants over the past week, but the impact has been significant. The energy sector has fallen in seven of the past eight trading sessions, and hydrocarbon exploration names such as Apache and Occidental are down by 20% to 30% over the past month, and double digits over the past week. Those moves have been spurred by the price of oil sinking to sub-$40 a barrel for the first time in months, driven by a faltering demand recovery and by global cartel OPEC beginning to ramp up production. Saudi Arabia cutting the official price at which it sells oil to Asia and the US early in the week added fuel to the fire. 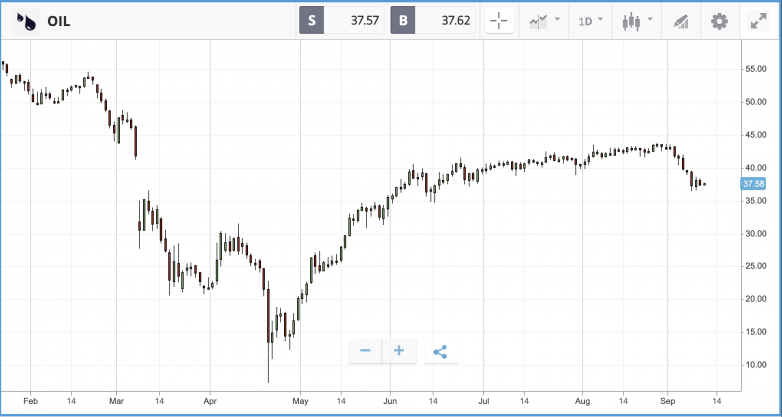 The Nasdaq Composite fell hardest yesterday, closing the day 2% lower. Losses from firms such as software firm Citrix Systems, Netflix and chipmaker AMD dragged the index lower, while Tesla bucked the trend with a 1.4% gain. It was a rollercoaster trading session all round, with the S&P 500 starting the day substantially up before beginning to slide late-morning. Investors had another week of initial jobless claims data to decipher, which showed 884,000 Americans filed for unemployment benefit for the first time last week, versus an expected 850,000.

In earnings news, exercise equipment and subscription firm Peloton jumped 9% in after-hours trading following its quarterly report; the stock had closed 3.8% lower during regular trading hours. The firm reported sales had jumped 172%, with its stationary bike and treadmill in demand by consumers working from home without access to gyms.

London-listed shares were close to flat yesterday, although they ended the day in the red. Sterling suffered another poor day, falling more than 1% against both the dollar and euro after the European Central Bank decided to hold fast on its current interest rate position. Morrison Supermarkets brought up the back of the FTSE 100, losing 4.6% after delivering a disappointing set of quarterly earnings results. The firm said it anticipates it will deliver profit growth for the full year but was hurt by a drop in demand for fuel.

In the FTSE 250, which closed the day marginally lower, Games Workshop provided a bright spot, as the miniature wargames manufacturer jumped by 11.8% after delivering a solid earnings update, which included double digit sales growth year-over-year. The company’s share price is now up 58.1% year-to-date and 126% over the 12 months.

Kroger: Capping off a relatively sparse earnings week is supermarket chain Kroger, which has added nearly 20% year-to-date to hit its current $27bn market cap. Similar to rival Walmart, Kroger has spent huge amounts on a shift to online shopping, and for its fiscal first quarter delivered a 92% jump in online sales as Americans were forced to stay at home by the pandemic. Now that Walmart has launched its Amazon Prime rival subscription service Walmart , analysts will likely probe Kroger on whether it wants to translate its online success into something similar when it reports its latest quarterly results today. Analysts are expecting an earnings-per-share figure of $0.54 for the quarter and are split between a buy and hold rating on the stock.

US inflation data: Consumer inflation data for August will be released in the US on Friday, with expectations pointing to a core CPI increase of 0.2% month-over-month and 1.6% year-over-year. That compares to July’s 0.6% monthly gain, the largest increase in a month since January 1991. The figures will be the first inflation data since the Federal Reserve set out its new policy to allow inflation to run above 2% for a sustained period of time.

During a debate about blockchain this week, Soto said cryptoassets would be accepted as donations for his re-election campaign. Processed through the payment processor BitPay, the campaign would accept eight cryptocurrencies in total, including bitcoin, bitcoin cash, ether, gemini dollar, USD coin and XRP.

Soto has sponsored a number of legislative proposals around cryptoassets and pushed for the government to support the cryptoasset industry on numerous occasions.

Just this week two bills proposed by Soto, called the Digital Taxonomy Act and the Blockchain Innovation Act, were passed as amendments in the AI for Consumer Product Safety Act by the Committee on Energy and Commerce.

The Blockchain Innovation Act’s goal is to establish a Blockchain Center of Excellence within the Department of Commerce (DOC). The DOC is also required to work with the Federal Trade Commission to study blockchain’s impact on commerce and its potential to reduce fraud by increasing security. The study is to be submitted as a report to Congress.

All data, figures & charts are valid as of 11/09/2020. All trading carries risk. Only risk capital you can afford to lose.