European markets have opened in the red this morning as investor sentiment remains downbeat due to increased case numbers and central bank commentary weighing on equities. This comes after Federal Reserve officials argued that more fiscal stimulus from Congress will be needed to support the US economy through the Covid-19 downturn. Investors took a bleak view of the warning, which comes as Democrat and Republican lawmakers remain at odds on what the next round of stimulus should look like. Enhanced unemployment benefits and funding for state and local governments are two of the main points of contention between the parties. Fed chairman Jerome Powell argued that “the recovery will go faster if there is support coming both from Congress and the Fed,” on Wednesday, adding that “the power of fiscal policy is unequalled.” Energy stocks took the hardest hit in the S&P 500, with the sector plunging 4.6% on aggregate, while information technology names ended Wednesday 3.2% lower. 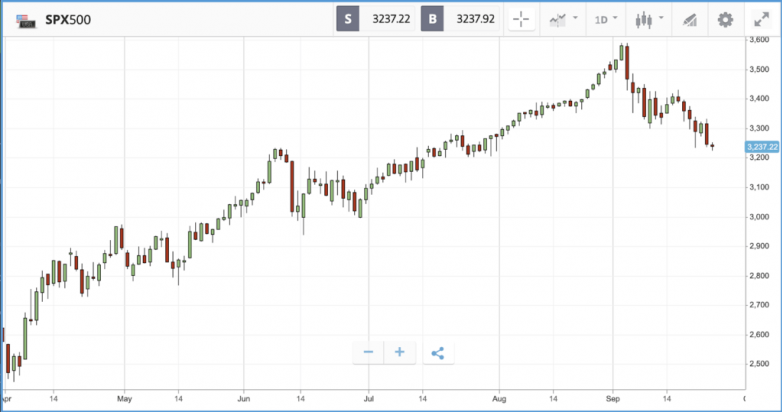 The Nasdaq Composite was the hardest hit of the three major US stock indices, ending the day 3% lower, dragged down by a 10.3% loss from Tesla, and 4% plus drops from Apple, Netflix and Amazon. One name that stood out from the crowd in the Nasdaq yesterday was computer memory firm Western Digital, which jumped 6.7% after announcing that it plans to reorganise itself to create separate units for its flash memory and hard drive businesses.

In the S&P 500, oil exploration firms were among the hardest hit stocks; Apache, Marathon Petroleum and Occidental Petroleum all fell between 6% and 9%. The biggest loser in the index was lithium miner Albemarle, which closed the day 15.6% down after Tesla’s ‘battery day’, in which the electric carmaker revealed it is working on a project to reduce the amount of lithium it needs to make a battery. Tesla also revealed it plans to get into the lithium mining business itself, and has secured the rights to 10,000 acres of land in Nevada where it plans to extract the metal from clay deposits.

Cineworld up 10% ahead of earnings, but then disappoints

London-listed stocks rallied yesterday while their US counterparts fell, with the FTSE 100 and FTSE 250 both adding more than 1% on the day.

In the FTSE 250, Cineworld Group jumped 10% the day ahead of its latest quarterly earnings report, in anticipation of positive news following the reopening of many cinemas globally. However, hopeful investors had a rude awakening this morning as shares tumbled 14% with the company citing new lockdown restrictions putting revenue under threat.

The biggest winners in the index, however, were technical products company Diploma and catering firm SSP, which closed the day up 26.9% and 12.3% higher respectively. For Diploma, the catalyst was an announcement that it is acquiring Windy City Wire Cable & Technology Products for close to GBP200 million, while SSP jumped despite warning investors of a huge plunge in sales.

The FTSE 100 was led by gambling firm GVC Holdings and JD Sports Fashion, which each added around 4%. In other headlines, Chancellor Rishi Sunak scrapped his planned autumn budget, and is set to announce new measures to prevent job losses and businesses from going bust on Thursday.

Costco Wholesale: Bulk supermarket Costco has added 17.3% to its share price year-to-date, as it has been a major beneficiary of consumers stocking up due to the pandemic. The firm reports its latest set of quarterly earnings on Thursday, following strong recent outlooks from peers including Krogers. Investors will be watching for whether the boost the company received from investors stocking up their pantries during the pandemic has waned, and what has happened to membership growth and renewals. Consumers and businesses have to pay an annual membership fee to shop at Costco, and the firm depends on that regular income.

Accenture: Professional services giant Accenture employs close to 500,000 people worldwide, and has added 9.5% to its share price in 2020 so far. The firm has been a beneficiary of companies retaining its services to aid with their transition to a digital working environment during the pandemic. Accenture operates across a diverse range of industries, however, and some have been harder hit than others. The company reports its latest set of quarterly earnings today, days after announcing the acquisition of tech-driven sales firm N3, that brings with it artificial intelligence and machine learning capabilities. Wall Street analysts expect the firm to deliver an earnings-per-share figure of $1.73 today.

Rishi Sunak announcement: UK Chancellor Rishi Sunak is set to announce plans today for protecting jobs once the government furlough scheme – which has kept the unemployment rate down in 2020 so far versus the US – expires at the end of next month. Other wage subsidies are reportedly being considered, amid widespread fears that the unemployment rate will jump once the current scheme expires.

Analysts have warned cryptoassets such as bitcoin and ethereum could be in for a bout of volatility come Friday when nearly $2 billion-worth of options contracts expire, according to Forbes.

The data, provided by Skew, suggests the level of options contracts has tripled in the past three months to $1.9 billion in total. Around $1 billion of this is focused on bitcoin alone, with many contracts set between $11,000 and $12,000, higher than bitcoin’s current dollar prices. This has left experts warning that cryptoassets could experience sudden volatility as options expire on Friday and option holders put cryptoassets they hold back onto the market.

Equally, there is an argument that nothing could happen as option traders are not necessarily forced to trade the cryptoasset at the end of the contract. As there is such a large amount of options set to expire at once however, it could lead to added volatility as those traders take new positions or sell out of old ones, says Decrypt.

“However, it could also have very little impact at all. If the options contracts expire without being exercised, then they won’t place upward or downward price pressure on bitcoin.”

All data, figures & charts are valid as of 24/09/2020. All trading carries risk. Only risk capital you can afford to lose