European markets opened in negative territory this morning with the FTSE down 1% as Sterling gained 0.3% against the dollar, hurting its overseas earning contingent. US futures are wavering either side of flat following yesterday’s gains, as investors await this evening’s Presidential debate and the progress of a new coronavirus stimulus package unveiled by the Democrats.

Technology names gained on Monday, but it was bank and energy stocks that led the way, as markets continued a rally that kicked off on Friday. Major stock indices around the world closed higher, with the S&P 500 up 1.6%, the Stoxx Europe 600 Index up 2.2% and the FTSE 100 adding 1.5%. For the Euro Stoxx index, it was the best day since June, helped substantially by major European banks. BNY Paribas gained 5.2%, HSBC 8.9% and ING added 4.6%. In the UK, banks made up four of the top five performers in the FTSE 100 on Monday, with Lloyds, NatWest and Standard Chartered all closing more than 7% higher. Boston Partners global head of research Michael Mullaney told the Financial Times that the gains posted by financials and other cyclical sectors reflected an easing of concerns about recent Covid-19 cases surges, plus signs of inflation which would expand margins for financial stocks. 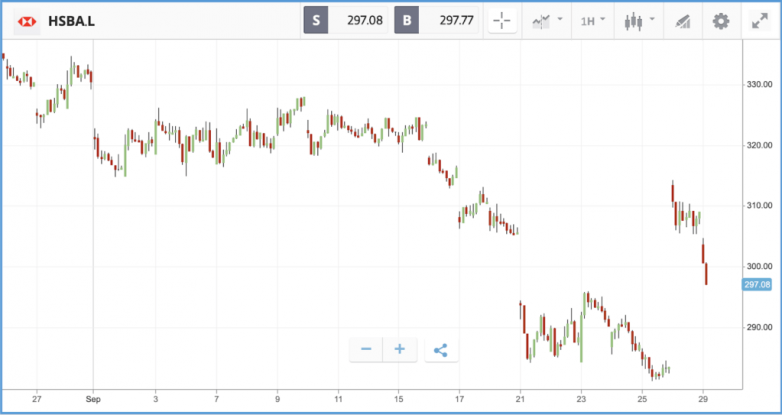 Investors also had positive industrial data from China to process, in which the nation reported that industrial profits gained 19% in August versus the same month in 2019.

All three major US stock indices were in the green to start the week, with the Nasdaq Composite the biggest winner at 1.9%. Shale oil producer Devon Energy led the S&P 500, adding 11.1% after announcing that it will be merging with WPX Energy. They hope that the larger combined business will be able to better weather the Covid-19 storm and lower the dollar-per-barrel price point at which they can turn a profit. Other top performing energy and travel-dependent names on Monday included Boeing, Delta Airlines, Diamondback Energy and United Airlines, which all added more than 5%. United also hit headlines separately, after the firm’s pilots agreed a deal to avoid furloughs until at least June 2021, in return for a reduction in minimum hours to spread schedules among pilots.

In other corporate headlines, Uber won back its license to operate in London after a court battle that has run for several years, ensuring its right to operate in one of its largest markets. Uber stock closed 3.2% higher following the news.

Among a swathe of financial names in the FTSE 100’s top 20, turnaround specialist Melrose Industries, beverage firm Diageo and InterContinental Hotels Group stood out, with all three closing the day out more than 5% higher. Overall, the index added 1.5%, while the FTSE 250 gained 1.9%. Among the banking winners, HSBC’s 8.9% gain was driven by news that the firm’s largest shareholder – Chinese insurance firm Ping An – increased its stake in the business.

Gambling firms topped and tailed the FTSE 250. William Hill plummeted by 11.6%, giving up some of the 30% plus surge it posted on Friday after reports of takeover offers from two different parties, while on the flip side Rank Group added 11.6%. Other winners in the FTSE 250 included travel operator National Express and homebuilder Crest Nicholson, which gained 10.1% and 8.8% respectively.

Micron: Memory chip maker Micron has been gaining against the tide over the past month. While the Nasdaq Composite has lost 5.6%, it has climbed by 9.3%. The firm reports its latest set of quarterly earnings on Tuesday after the US market closes. Since its last update, memory prices have been falling, following Chinese giant Huawei’s rush to buy chips ahead of a ban on sales to the company by US firms. Currently, 25 Wall Street analysts rate the stock as a buy or overweight, seven as a hold, and one as a sell.

McCormick: Spice and seasoning firm McCormick has gained 15% year-to-date, as more consumers have been cooking at home due to pandemic restrictions on dining out, which has supported its consumer division. The firm’s division focused on restaurants and commercial food service providers has faced a tougher time however, and the balancing act between the two will be closely watched by investors when the firm reports quarterly earnings on Tuesday. Currently analysts are split on the stock, leaning towards a hold rating.

UK GDP: On Wednesday UK GDP data for the second quarter of the year will be released, with the UK already lagging the US and many of its European peers in terms of an economic rebound from the depths of the pandemic disruption. Both the quarter-over-quarter and year-over-year growth rates will be revealed, with consensus expectations pointing to a drop of more than 20% on both counts, according to Trading Economics.

Naysayers of the world’s largest cryptoasset accuse bitcoin of excessive volatility, but recently it has been a sea of tranquility compared to Tesla shares, according to Coindesk.

Since the end of June, Tesla has witnessed higher percentage daily moves than bitcoin with the volatility gulf widening in recent weeks. In the past 27 days bitcoin experienced volatility below -1.25% on 14 days whereas Tesla only reached this level 6% of the time in the same period.

Bitcoin’s 30-day implied volatility, which measures investors’ expectations of how volatile the cryptoasset will be, has declined to 44% – its lowest level in two years. However, in the past, such lower levels of volatility have tended to precede large price moves, although this is not a given in future.

All data, figures & charts are valid as of 29/09/2020. All trading carries risk. Only risk capital you can afford to lose