Markets are mostly in the red this morning after the first presidential debate provoked a cautious reaction. A somewhat disorderly affair has US futures signalling they will open 0.5-0.7% lower. Neither candidate convincingly came out on top implying the election will still be hotly contested, leaving an air of uncertainty for investors. A Trump win is viewed as meaning a continuation of lower corporate income taxes, reduced regulation and more relaxed Covid-19 restrictions. A Biden victory would mean an end to Trump’s unpredictable messaging and policies, potentially more favourable relations with China, and higher taxes to fund increased government spending.

In more positive news, the Conference Board’s consumer confidence index came in at its highest level since the Covid-19 pandemic began, jumping from 86.3 in August to 101.8 this month. A far smaller increase had been forecast, with more favourable than anticipated views on business and labour market conditions pushing the number higher. The better than expected figure failed to buoy markets however, as investors wait for the monthly employment report that will land at the end of the week.

In corporate news, J.P. Morgan has been hit with a record $920m fine for manipulating metals futures and government bond markets over several years, using a method known as spoofing. The illegal practice involves placing and withdrawing trades to give a false impression of demand, and J.P. Morgan’s traders reportedly racked up thousands of violations. Elsewhere, Disney revealed that it is laying off 28,000 workers across its theme parks, experiences and consumer products division, with 67% of those part-time employees. 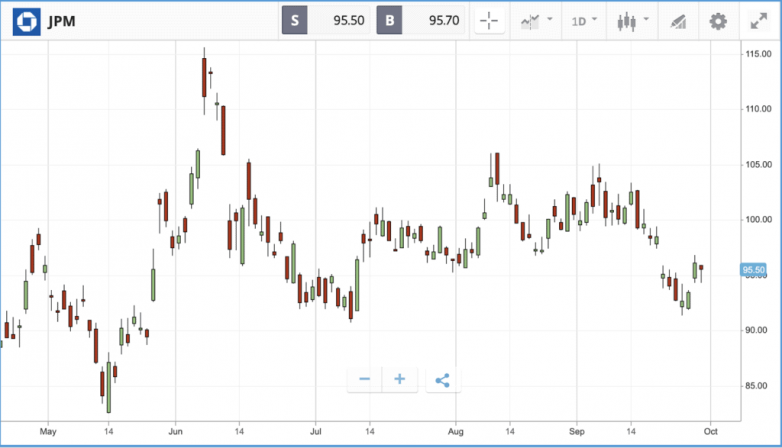 All three major US stock indices fell on Tuesday, despite positive consumer sentiment figures. Investors were holding their breath ahead of Tuesday night’s presidential debate, plus Wednesday’s private sector employment report and Friday’s jobs report. The S&P 500 closed 0.5% lower, with oil exploration and service firms including Apache, National Oilwell Varco and Halliburton all closing more than 5% lower. Sector wise, energy took by far the biggest hit, sinking by 2.7% overall on Tuesday, while financials also fell by more than 1%.

Chipmakers enjoyed a positive day, with Micron Technology and Advanced Micro Devices both gaining more than 2%, although Micron plunged by more than 5% in after-hours trading following the release of its quarterly earnings. The firm told investors that it does not know when it will be able to sell to Chinese firm Huawei again, one of its largest customers, after a ban by the Trump administration.

Similar to the US, it was a negative day for London-listed shares on Tuesday as investors waited on the evening’s presidential debate. The FTSE 100 fell by 0.5%, while the FTSE 250 closed 1.1% lower, bringing the two indices’ year-to-date performance in line at -22%. Catering firm SSP Group, bakery chain Greggs and cinema chain Cineworld weighed on the FTSE 250, closing 9.7%, 8.1% and 8.1% lower respectively. Greggs decline came after the firm cautioned that it may cut jobs due to lower demand, while Cineworld had its long-term debt rating downgraded by S&P. The FTSE 100 was taken lower by a rough day for Rolls Royce, International Consolidated Airlines Group and HSBC, after Monday’s rally.

ADP employment report: In August, new US private payrolls – as tracked by payroll service provider ADP – came in at 428,000, roughly half economists’ expectations. September’s figure will be reported on Wednesday, ahead of the Bureau of Labor Statistics’ job report on Friday. This month, the consensus points to a figure of 650,000, according to Trading Economics.

Institutional investors are increasingly looking to physically hold the bitcoin they invest in rather than simple cash-based futures, a report from ZUBR shows.

Investors are also more likely to be long-term holders of the cryptoasset, ZUBR found, and are less likely to be put off by any volatility than in the past. The report finds that institutional investors have until recently been reliant on regulated exchanges to trade bitcoin futures.

Bitcoin futures trading hit $4 trillion in the past year, the report adds. In the US this is done mainly through the Chicago Mercantile Exchange (CME).

All data, figures & charts are valid as of 30/09/2020. All trading carries risk. Only risk capital you can afford to lose