Asian markets climbed overnight to start the week on the front foot after reports that President Trump could leave hospital as early as today. European markets have also opened positively with the FTSE and Dax up 0.5% a piece. US futures are also signalling similar gains. 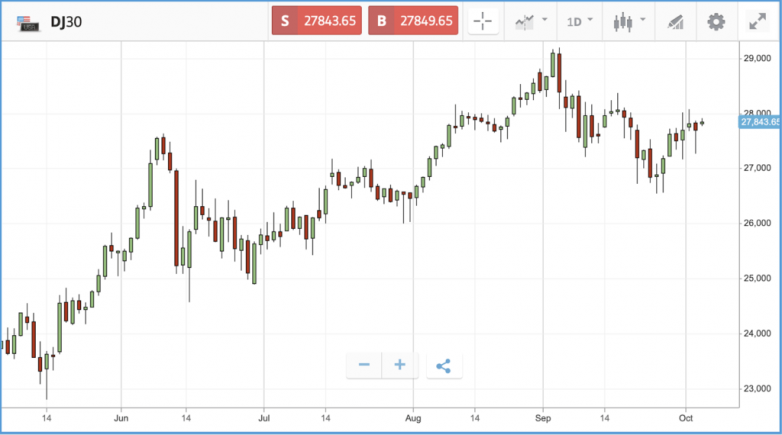 Markets were rattled late last week after it was announced he had contracted the virus. The weekend news cycle was a mess of contradictory reports about the President’s health, as investors were still digesting the week’s chaotic presidential debate. Trump’s illness poses questions both around what it means for the election, and the impact it may have on Democrat lawmakers’ efforts to get a new multi-trillion dollar stimulus package through the Senate.

The news also overshadowed Friday’s jobs report from the Labor Department, which showed a slowing rate of recovery in the US labour market in September. During the month, employers added 661,000 jobs, less than any of the preceding four months – and well below consensus estimates of 850,000.

Up until Friday, all three major US stock indices had been poised to close more than 2% higher for the week, but Friday’s job numbers and Trump’s Covid diagnosis sent stocks sharply lower. The Nasdaq Composite was hit hardest, ending the day 2.2% down and capping its gain for the week at 1.5%. It’s worth noting that despite more recent turbulence, the Nasdaq’s performance in Q2 and Q3 is still the best two-quarter result for the index since 2000, according to analysts at John Hancock Investments.

Major airline stocks such as Delta and United finished in the green on Friday despite the broader sell off, after House Speaker Nancy Pelosi asked airlines to delay job cuts, following the expiration of a bailout deal that prohibited layoffs until October 1. Pelosi raised the prospect of an airline support bill separate to the main Covid-19 stimulus package currently being fought over by lawmakers.

One intriguing piece of corporate news that came out on Friday is that Florida-based NextEra, the world’s largest solar and wind power generator, has now passed ExxonMobil in terms of market cap. The firm’s stock is up 16.1% year-to-date, versus Exxon’s 50% plus loss.

Cineworld may shut hundreds of US cinemas

In the UK, the FTSE 100 and FTSE 250 also both delivered a positive week, with the 250 ( 2.1%) leading the charge. Asset managers were among the week’s leaders, with Liontrust Asset Management, Standard Life Aberdeen and M&G all delivering double digit gains. It was a positive week for the UK’s banking giants too, with NatWest, Lloyds and HSBC also enjoying significant gains.

In corporate news over the weekend, Cineworld made headlines after it said it is considering a temporary shutdown of its US cinema chain Regal, which is the country’s second largest. Following months of closures, Regal began reopening its locations in July, but the industry is facing significant challenges from both a resurgence in Covid-19 cases and the delay or straight-to-digital release of major films. Last month, London-listed Cineworld reported a loss of $1.6bn and warned it may need to raise additional funds to survive if a new wave of lockdowns hit.

Restaurant Group: London-listed Restaurant Group is the firm behind brands such as Wagamama, Frankie & Benny’s and Coast to Coast. As is the case for the restaurant industry as a whole, the pandemic has put a huge dent in the firm, which has seen its share price fall by more than 67% in 2020. Restaurant Group reports its latest set of earnings on Tuesday, following a period in which the UK began to emerge from lockdown; a situation then complicated by a surge in Covid-19 cases that prompted confusing new restrictions. Currently, seven analysts rate the stock as a buy, six as an outperform and three as a hold, per the FT.

President Trump’s health: All eyes will be on the President on Monday, with investors waiting to see whether he will be released from hospital, and any clues as to the impact his Covid-19 illness will have on stimulus talks and the election race. On Friday, House Speaker Nancy Pelosi said that Trump’s illness could change the dynamic of stimulus talks. Speaking to MSNBC, she argued that Republicans can now “see the reality of what we’ve been saying all along, this is a vicious virus.” As economic data begins to show the US recovery is slowing, a stimulus deal is now viewed as critical by many investors.

As the election and stimulus talks have begun to dominate headlines, a dire period for the energy sector has somewhat slipped under the radar. In the S&P 500, the energy sector is down 22% over the past month, versus the 1% loss posted by the broader index. Over three months, energy stocks have sunk by more than 25% while the S&P has gained 7.2% overall. The price of Brent Crude oil has been hovering around the $40 a barrel mark and is under pressure as the start of potential Covid-19 second waves in various regions raises the prospect of a painfully slow recovery in fuel demand. Per CNBC, Bank of America expects oil prices to remain stuck below the mid $40s to 2020-end. “In terms of downside risks, a big second Covid-19 wave was always going to rank first, but a warm winter now ranks second given the persistent surplus in distillate fuels,” one of the firm’s analysts said. He explained that crude prices won’t gain real traction again until demand for such fuels, including jet fuel, recovers significantly.

Cryptoasset exchanges saw volumes remain well above levels seen throughout the rest of the year, data from The Block’s legitimate volume index have shown.

The monthly index reported over $169 billion in volume for the month of September, just below levels seen in August.

The largest exchange by trading volume continues to be Binance, which generated $113 billion in volumes — taking up 66.8% of the market share.

The gains come as bitcoin continues to trade above the $10,000 mark. It has not dropped below that level since July, although it has retreated around 10% from peaks around the $12,000 level.

All data, figures & charts are valid as of 05/10/2020. All trading carries risk. Only risk capital you can afford to lose