Goldman Sachs at its most profitable in a decade

Another round of third-quarter bank earnings landed yesterday, including Bank of America and Wells Fargo, but it was Goldman Sachs that stole the show. The firm’s $3.6bn profit for the quarter, from $10.8bn of revenue, was almost double the figure it reported for Q3 2019. Highlights included a 49% year-over-year revenue increase from the firm’s fixed-income division, where investors have spent years pushing for cuts according to the FT. The firm’s asset management division increased revenues by 71%, while its nascent consumer and wealth management division added 13% to its revenues to hit $1.5bn for the quarter. Chief executive David Solomon said that the firm plans to look at acquisitions to help accelerate the growth of the latter. 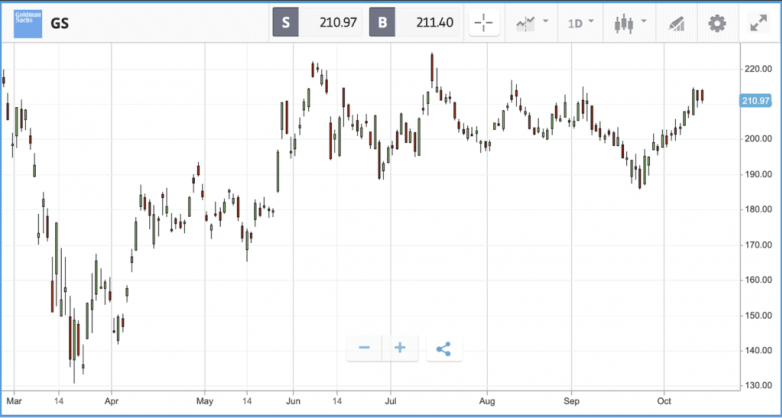 Conversely, it was a tough day for United Airlines, whose earnings report revealed a $1.8bn loss in Q3 with the firm burning through $25m a day in cash on average. The loss was marginally wider than anticipated, and compares to the $1bn profit the firm made in Q3 2019, pre-pandemic. Investors had clearly been bracing for worse, after an initial stumble the firm’s share price climbed following the earnings update.

Meanwhile the FTSE 100 has opened 2% lower this morning as continued uncertainty over Brexit weighs on UK shares. EU leaders are to meet today to seek concessions from the UK on a number of different issues with neither side seemingly wanting to budge at the moment.

The major US stock indices all fell back yesterday, with Wells Fargo and Bank of America the biggest losers in the S&P 500 after their quarterly earnings reports. Wells Fargo, which closed the day 6% down — and is now 57% down year-to-date — after low interest rates put pressure on its net interest income (the difference between the rate banks offer on customer deposits versus loans). On the firm’s earnings call, chief executive Charles Scharf reiterated his plan to enact massive cost cuts, which are expected to lead to huge job losses. He told analysts that there is a “gigantic amount of redundancy” in the business.

At the other end of the spectrum, oil exploration firm Concho Resources topped the S&P 500 with a 10.2% gain, after reports that ConocoPhillips is in talks to buy the firm. Both firms have seen their values nearly halve in 2020, and Bloomberg described the deal as “a bold bet on shale during a historic industry downturn.”

Wednesday was a mixed day for UK stocks with the FTSE 100 down 0.6% and FTSE 250 up 0.3%. The FTSE 100 was led by online takeaway firm Just Eat, which climbed 6.4% after reporting a 46% increase in the third quarter versus the same period in 2019. Just Eat said it delivered a total of 151.4 million orders globally in Q3, including 46.4 million in the UK alone. The firm said that partnerships with McDonald’s and Greggs helped it grow sales.

Similar to the US, banking names brought up the back of the FTSE 100. Standard Chartered and HSBC fell back by 4.5% and 2.8%, joined by pharmaceutical firm AstraZeneca, food service business Compass Group, and Vodafone Group in the bottom five.

Intuitive Surgical: Medical robotics firm Intuitive Surgical’s stock has gained 27% this year, despite Covid-19 disrupting large numbers of medical procedures. The company delivers its latest quarterly earnings update today, where the volume of procedures amid a resurgence in Covid-19 case numbers in several states across the US. Investors will also be watching closely for news of how the pandemic has disrupted the firm’s ability to install its systems in medical facilities. Currently, 10 Wall Street analysts rate the stock as a buy or overweight, seven as a hold and three as a sell.

Morgan Stanley: Hot on the heels of announcing a $7bn deal to acquire asset manager Eaton Vance, which immediately followed closing the acquisition of E*Trade, Morgan Stanley will deliver its Q3 earnings report today. Bank earnings so far have been a case of famine or feast, and investors will be watching trading revenues closely since they boosted the firm to a record profit in Q2. The strategic direction of the firm and how it plans to integrate Eaton Vance into those plans will also be a key point of focus. Analysts are expecting an earnings per share figure of $1.28 for Q3, an increase from the $1.08 they had predicted three months ago. Morgan Stanley stock is now effectively flat year-to-date.

Walgreens Boots: Pharmacy and retailer Walgreens Boots stock is down 39% year-to-date, while it is the first port of call for many looking for medicines, consumers have been steering clear during the pandemic which has hurt sales. The firm reports its latest quarterly earnings today, Wall Street analysts are expecting an earnings per share figure of $0.96. Investors will be watching closely to see how the company’s sales have recovered as lockdown restrictions lifted. Currently, analysts heavily favour a hold rating on the stock.

Crypto corner: Majority of ether has not moved in 12 months

Just 39.6% of ether, the cryptoasset backed by the Ethereum blockchain, has moved in the past year, research from crypto analysts Glassnode has found.

Glassnode believes so-called ‘whales’, or large holders of a particular cryptoasset, have been hoarding ether ahead of the ETH 2.0 overhaul. Some 20% of ether has not moved or been transacted since 2017.

The ETH 2.0 project is underway to overhaul the efficiency of the Ethereum blockchain in different stages. Each phase, it is hoped, will improve functionality and performance of the blockchain. Phase ‘0’ of the Ethereum overhaul is expected to begin in the coming months.

All data, figures & charts are valid as of 15/10/2020. All trading carries risk. Only risk capital you can afford to lose