China’s economy continued to recover rapidly from the pandemic in Q3, expanding 4.9% year-on-year, adding to the positive signs around the world of numerous economies returning to growth rapidly.

The expansion in gross domestic product missed expectations but was still well ahead of a 3.2% increase in the second quarter, as the country’s industrial production drive helped stoke up the wider economy.

Industrial production was up 6.9% in September, with China emulating positive signs from other countries seen last week.

On Friday, the US Commerce Department reported that retail sales increased 1.9% in September versus the previous month, the fifth straight month of retail sales growth. That was more than double the rate of growth anticipated, with sales of clothing and sporting goods soaring despite the unemployment rate remaining elevated. The positive economic data came at the end of a mixed week for major US stock indices, which all finished marginally higher. Rising Covid-19 case numbers in the US and abroad are giving investors pause, with a “tug of war between rising concerns and encouraging economic data” according to analysts at financial advice firm Edward Jones.

Last week kicked off third-quarter corporate earnings season in the US, with the financials sector dipping by 0.9% after most of the big banks delivered their Q3 updates. While some banks’ profits were buoyed by spikes in trading and investment banking revenues, and loan loss provision were nowhere near as severe as last quarter, there is uncertainty about whether government stimulus has prevented heavy loan delinquencies from hitting entirely, or merely delayed the inevitable. 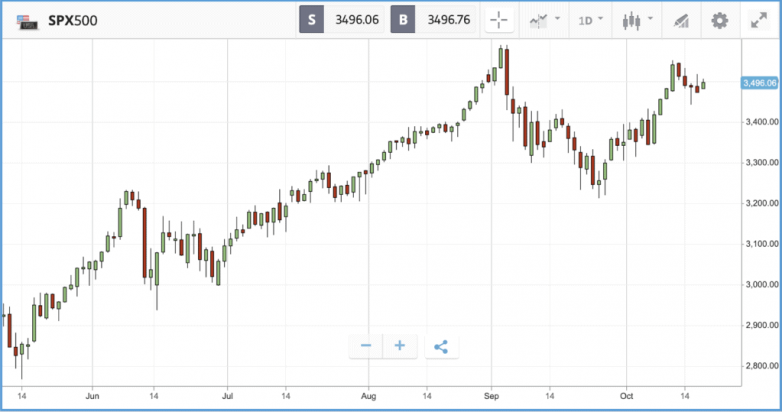 The S&P 500, Dow Jones Industrial Average and Nasdaq Composite all made it through the first week of Q3 corporate earnings relatively unscathed, despite an expected 20% decline in S&P 500 company earnings year-over-year (according to FactSet). US Covid-19 cases also surged back to the 60,000-a-day mark, heading back towards July’s peak levels after dropping below 35,000 in mid-September.

Notable over the weekend was a 48-hour deadline set by House Speaker Nancy Pelosi for an agreement on a new stimulus package to be agreed in order for it to be passed before the November 3 presidential election. There remains a substantial gap between Democrat and Republican lawmakers on the contents of a deal, such as the strength of Covid-19 testing and tracing requirements. Markets have swung significantly on the rising and falling prospects of a stimulus package in recent weeks, and the two-day deadline will be watched with interest.

London-listed stocks slumped last week; despite a 1.5% rally for the FTSE 100 on Friday the index closed out the week 1.6% lower. International Consolidated Airlines Group was the week’s biggest loser, falling double digits, while Associated British Foods, BP and Barclays also sank by more than 5% over the course of the week.

The FTSE 250 ended the week 1.4% down, dragged lower by hospitality and travel names that are most at risk from new lockdown restrictions with Covid-19 cases surging. Pub chain JD Wetherspoon, Cineworld and easyJet all fell, with the trio part of a dozen or so names that suffered double-digit losses.

There were some bright spots in the FTSE 100 during the week, however, with online takeaway service Just Eat and airliner engine maker Rolls-Royce both enjoying double-digit gains. Just Eat reported surging online orders in a trading update, while investors have responded positively to Rolls-Royce shoring up its finances.

IBM: IBM’s post-market close earnings report today will be an interesting one, after the firm announced on October 8 that it plans to spin off its IT outsourcing business. That division accounts for $19bn of the firm’s $59bn in revenue, according to MarketWatch. It leaves behind a hardware, software and services business which the company plans to target at the hybrid-cloud market, where client companies hand off some of their data to a cloud provider to be stored offsite while keeping some data on their own premises. IBM has both the cloud and hardware capabilities to service both parts of a hybrid arrangement but faces stiff competition, and unlike many other cloud providers its share price is down in 2020. Currently, Wall Street analysts favour a hold rating on IBM stock.

Cadence Design Systems: California-based Cadence is an engineering firm that provides structures needed to design circuit boards and chips. Along with many chipmakers, its share price has surged in 2020, and is now up more than 65% year-to-date, boosting its market cap past the $30bn mark. According to Zacks Equity Research, it is an expanding customer base that has driven investor optimism about the stock, along with an uptick in chip design activity and an evolution in semiconductor manufacturing processes. Analysts are expecting a Q3 earnings per share figure of $0.61 when the company reports on Monday, versus $0.54 in Q3 last year.

Reckitt Benckiser: London-listed consumer goods firm Reckitt Benckiser sits behind health and hygiene brands including Dettol and Lysol. Its share price has been boosted by 20% in 2020, while the FTSE 100 has fallen dramatically overall, given the demand for some of its products during the pandemic. The company delivers its latest set of quarterly earnings on Tuesday, where a likely focus will be what surging Covid-19 case numbers in Europe and elsewhere mean for the firm’s sales.

All eyes on the tech giants

The S&P 500’s five biggest companies – Apple, Microsoft, Amazon, Alphabet and Facebook – now account for 28% of the index’s weighting, and have been responsible for 25% of its earnings, Goldman Sachs said earlier this month. Other major stocks, including Netflix and Tesla, have also delivered huge returns for investors this year.

This week the latter two report third-quarter results, with Netflix on Tuesday, Tesla (and Verizon Communication) on Wednesday, and then other notable name Intel on Thursday, before Apple, Amazon, Alphabet, Microsoft and Facebook report the following week.

While many are now questioning their share prices given the meteoric rise we have already seen, others believe selling now would be an error. Michael Farr, president of Farr, Miller & Washington LLC, told Reuters to rotate out of tech because of big gains and some recent volatility would be “a suckers’ trade”. “Reports of their demise have been greatly exaggerated,” he said of the big tech stocks.

All data, figures & charts are valid as of 19/10/2020. All trading carries risk. Only risk capital you can afford to lose