Bitcoin has shown resilience over the past week, holding firm above the newly conquered $11k level as cryptocurrency exchange OKEx suspends withdrawals, sending a tremor through the market.

Despite falling three percent as the news hit, Bitcoin soon bounced on boosted fundamentals: The soaring hashrate has once again hit all-time highs, and representatives from U.S. regulatory agencies have made positive comments about cryptocurrency. 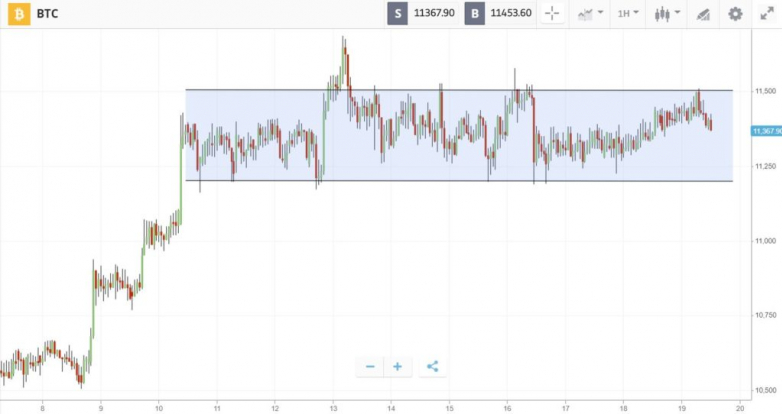 Meanwhile, altcoins are a mixed bag. Stellar has surged following a big announcement, and NEO and Tron have dropped around 5% after a spectacular performance over the third quarter.

After big names including MicroStrategy and Square have added Bitcoin to their treasuries, regulators appear to be softening their stance.

Over the last week, representatives from both the Securities and Exchange Commission (SEC) and the Commodity Futures Trading Commission (CFTC), have offered support to the cryptocurrency market. SEC chairman Jay Clayton said the agency is considering regulations to facilitate cryptoasset ETFs, and CFTC chairman Heath Tarbert extolled the virtues of Ethereum by comparing it to the internet during a live interview with CoinDesk.

This not only suggests the long-awaited Bitcoin ETF could be on the horizon, but shows unprecedented positivity about the new asset class among regulators.

Cross-border payment coin Stellar jumped over 10% this week following an announcement on Thursday that second-largest stablecoin $USDC will be launching on the blockchain next year.

This milestone will mark the first time that a major stablecoin trades on Stellar, and was met with a buzz of conversation on social media. As the price rallied, the number of Tweets sent mentioning the altcoin increased by 355%, according to digital asset data provider The TIE.

While the crypto market may have finished the week flat, a number of developments suggest further uplift could be in store. Along with positive comments from regulators and the soaring hashrate, the crypto sentiment indicator is now lurching towards greed.

If this greed takes hold and Bitcoin moves up to break through $12,000, we could see a sudden rally. As the price gets closer to the previous all-time high, there are fewer historic resistance levels to break through, and it becomes more likely that surging prices will draw more buyers into the market.

On Wednesday, volatility may hit global markets as the Senate votes on a $500 billion coronavirus relief package. Although it is expected to fail, approval could lead to a rally in both stocks and cryptocurrency.