European markets are in the red this morning, coming off their highs as infection rates continue to rise and the realisation that a vaccine is not an overnight fix dawns on investors. Despite breakthrough news from Pfizer’s vaccine trial this week, there is yet to be approval and the logistics of transporting a vaccine that must be kept at sub zero temperatures is beset with issues.

The FTSE and Dax are down 1%, this comes after the UK announced that GDP growth missed expectations over the last quarter at 15.5% with 15.8% expected. 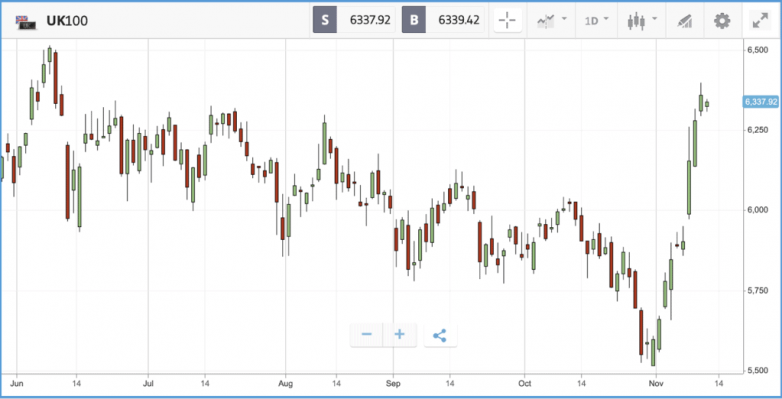 Growth sectors, including tech stocks, bounced back yesterday after falling sharply on Monday and Tuesday in the wake of positive news from Pfizer’s Covid-19 vaccine trial. There was no apparent catalyst for the move, other than investors taking advantage of the opportunity to get into some of the year’s best performing names while they were cheaper. Peter Dixon, senior economist at Commerzbank, told the Financial Times that investors have realised shifts towards homeworking and online shopping are not going to reverse even when there is a vaccine. “Covid is going to have a similar impact on economic structures as a major war,” he said. “A lot of the changes … will prove to be permanent.”

In the S&P 500, the information technology sector closed the day 2.4% higher, with the consumer discretionary and consumer staples sectors the next best performers. At the other end of the spectrum, energy, financials and materials stocks all fell.

The tech stock rebound propelled the Nasdaq Composite to a 2% gain on Wednesday, while the Dow Jones Industrial Average was close to flat and the S&P 500 posted a more modest 0.7% increase. Chipmakers Qualcomm and Nvidia helped lead the way, with gains of 5.4% and 5.1% respectively. PayPal also enjoyed a substantial rally, adding 4.9%. One factor potentially dampening vaccine-related spirits (and playing into tech stocks’ hands) was the news that the US has once again set new records for Covid-19 infections, with the seven-day average at North of 100,000.

The Dow was weighed down by some of the top performers at the beginning of the week, with American Express and Boeing both giving back some of their gains. Apple led the index, with a 3% surge, although the company’s share price is still down over the past month; a month in which it has unveiled new iPads, iPhones and Macbooks.

UK stocks continue rally, with FTSE 250 close to a single-digit loss in 2020

London-listed shares continued to rally yesterday, with the FTSE 100 and 250 both mounting their first sustained period of recovery after months of stagnation. The FTSE 250’s 1.6% gain puts it within touching distance of being back to a single-digit loss for the year, while the FTSE 100 remains 15.4% down in 2020 so far after climbing by 1.4% on Wednesday. At the top of the FTSE 100 was International Consolidated Airlines Group, which jumped 8%, while Ocado Group enjoyed a 6.4% gain on the back of the same tech-led rally that was seen in the US. Banking stocks enjoyed another positive day too, with Lloyds, HSBC and Natwest all closing the day between 3% and 4% higher.

Leading the FTSE 250 was marine engineering company James Fisher & Sons, which closed the day more than 20% higher, followed by a 13.5% gain for Georgian firm TBC Bank.

The Walt Disney Co: Theme park and entertainment giant Disney has been one firm buoyed by Pfizer’s 90% effective vaccine trial results, which potentially open up a route to a return to normal operations. The firm has faced disruptions both to its parks and to its movie/television production and distribution efforts. Over the past five trading days, Disney stock has gained 10.2%, ahead of its latest quarterly earnings results on Thursday. Analysts are expecting the company to deliver a significant loss for the quarter.

Cisco: Networking and telecoms tech firm Cisco has also enjoyed a vaccine-induced rally, with its shares up 7.6% over the past five trading days. Year-to-date, the firm’s share price is down 18%; with staff working from home, companies have not been spending on the kind of in-office networking technology that makes up a chunk of Cisco’s business. Key to the company’s quarterly earnings report today will be management updating investors on progress made to move the firm away from some of its legacy business lines and towards software and services. Currently, Wall Street analysts are split between a buy and hold rating on the stock.

Pinduoduo: Chinese e-commerce platform Pinduoduo, which has a Nasdaq listing and a market cap north of $100bn, has added close to 200% to its share price in 2020 on the back of mass shift to online shopping driven by the Covid-19 pandemic. The company will deliver its Q3 earnings report this morning New York time.

Users of the Ethereum blockchain experienced an accidental hard fork after a bug in the Infura servers system’s Go Ethereum (Geth) client accidentally split the blockchain in two, according to CoinDesk.

It later emerged a bug in the Geth client had accidently forked the Ethereum blockchain in two. The bug meant for a short while Ethereum users were unwittingly interacting with two different blockchains. The bug happened as certain developers were using a version of Ethereum that lacked a more up-to-date software patch. Infura, the server systems at the centre of the glitch, later corrected the issue.

Unnamed developers told CoinDesk the glitch happened because certain developers failed to update their code in good time. When a patch was silently applied to Geth, the system forked between those with the patch and those without it.

All data, figures & charts are valid as of 12/11/2020. All trading carries risk. Only risk capital you can afford to lose