As the dust settles on the 2020 US Presidential Election, the identity of the winner is now clear: Democrat Joe Biden has defeated incumbent Donald Trump and will become the 46th President of the United States. While Biden will only take office in January, 2021, markets are already reacting to the win, in an overall positive manner.

Invest in Markets with 0% Commission

Your capital is at risk. Other fees may apply. For more information, visit etoro.com/trading/fees.

Market reaction to the US election

Immediately after major US news networks announced that Biden is the President-elect, Wall Street reacted positively. Markets were later boosted further by news of an effective coronavirus vaccine, but that is a separate issue. So why did markets rally after Biden was declared the winner?

Traditionally, Republicans are perceived as better for the markets and are often favoured by Wall Street. So why would they approve of a Democrat like Biden? Well, there are more reasons than one.

Firstly, as amazingly as markets performed during President Trump’s term, reaching never-before-seen heights, they were also extremely volatile — something many long-term investors are not fond of. Moreover, COVID-19 was the most influential factor in markets this year, and Trump’s countermeasures, or lack thereof, caused many Wall Street players to fear the impact of the ongoing pandemic. Biden, on the other hand, started assembling his coronavirus task force the day after he was elected.

Another reason is that Biden is much more moderate than some of his party mates, such as Elizabeth Warren and Bernie Sanders. Moreover, his second-in-command, VP-elect Kamala Harris is considered a friend of Wall Street. Lastly, despite losing the presidency, Republicans will most likely retain control of the US Senate, which means that any major reform will have to be approved by the party which has capitalism embroidered on its banner.

Despite the above-mentioned notion that Republicans are better for Wall Street, history tells another story. Over the years, markets have performed better overall when a Democrat was in the Oval Office. The graph below demonstrates this by showing how the Dow Jones index performed under the last four Presidents. 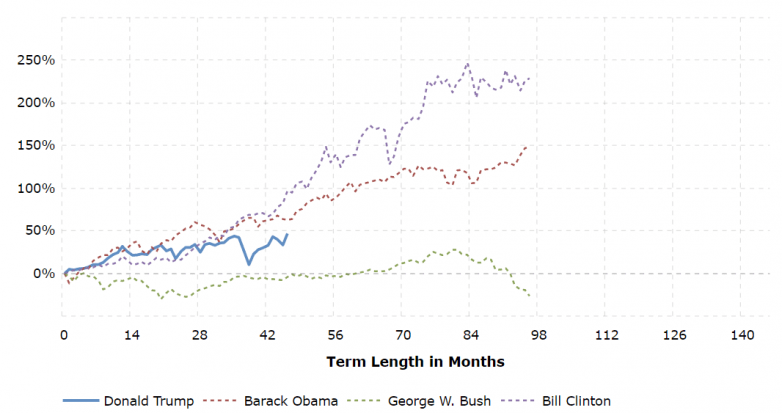 The performance of the Dow Jones Industrial Average is considered a gauge of the overall health of Wall Street and of the American economy. Despite reaching record heights under Trump, as the graph above shows, its gain percentage-wise was nowhere near as impressive as its performance under Democrats Obama or Clinton.

Your capital is at risk. Other fees may apply. For more information, visit etoro.com/trading/fees.

Naturally, there is no way to predict how markets will behave under Biden. Predicting market behaviour is hard enough as it is, but with the term starting next year, things are even more complicated:

Any of the above scenarios could happen, however, it is also possible that Biden’s term will be relatively uneventful, and markets will follow the regular supply and demand patterns. Either way, investors should be on the lookout for new potential investments, as a power shift of this magnitude can present some excellent opportunities.

Invest in Markets with 0% Commission

Zero commission means that no broker fee will be charged when opening or closing the position and does not apply to short or leveraged positions. Other fees may apply. Your capital is at risk.

Zero commission does not apply to short or leveraged positions. For additional information regarding fees, click here. For clients of eToro AUS, stocks are offered through ARSN 637489466 operated by Gleneagle Asset Management Limited ABN 29 103 162 278, AFSL 226199, and promoted by eToro Australia Pty Ltd. CAR 001281634. Only stocks traded on leading US and EU stock exchanges are available. All other stocks are offered on a derivative basis and bear commission. Refer to our FSG and PDS before trading with us.

Over the moon Bitcoins alltime high and how to invest

Changes in trading schedule on January 18