Dow closes above 30,000 for the first time ever

On Tuesday, the 124-year old Dow Jones Industrial Average closed above the 30,000 point mark for the first time in its history, almost four years after it first crossed the 20,000 mark. The Dow is now up more than 60% since its low in March, and surged through 30,000 with a 1.5% daily gain on Tuesday. News that Donald Trump is allowing the presidential transition to Joe Biden to begin, despite not having publicly conceded the election, helped boost sentiment. In addition, reports that Biden plans to appoint former Federal Reserve head Janet Yellen as his treasury secretary added to the positive atmosphere. Vontobel Wealth Management CIO Dan Scott told the FT that Yellen as treasury secretary “is a huge plus for markets.” 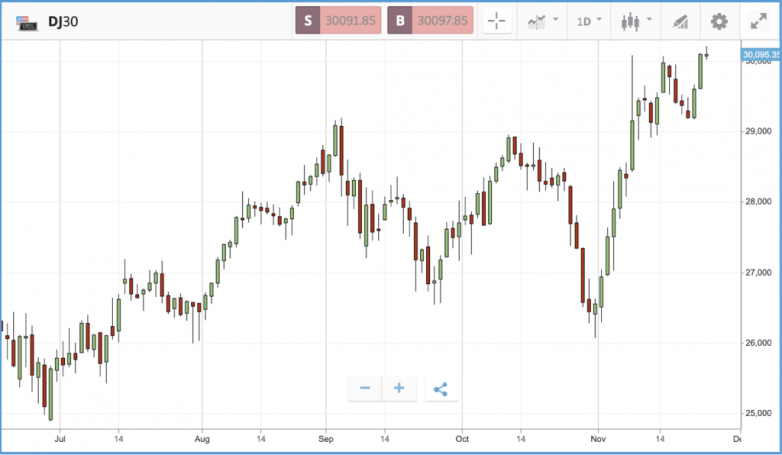 The positive outlook has continued overnight as Japan’s Nikkei hit its highest level since 1991. European markets are also up, the FTSE is 0.5% higher despite continued GBP strength. Sterling has been trading around two month highs as optimism for a Brexit deal grows.

It wasn’t just stocks in the green on Tuesday, as the price of oil continued to make progress, gaining a further 1% today, which takes it comfortably above $45 a barrel. The S&P 500’s energy sector as a whole was up 5.2% on Tuesday after gaining more than 7% on Monday.

Other hard-hit sectors rallied on Tuesday, with the S&P 500’s financials sector adding 3.5% and the materials sector up 2.5%. Overall the S&P 500 closed 1.6% higher, followed by the Dow’s 1.5% gain and the Nasdaq Composite’s 1.3% advance. Oil firm Chevron led the Dow at 5%, followed by Wall Street giants JPMorgan Chase and Goldman Sachs at 4.6% and 3.8%. Discount chain Dollar Tree, miner Mosaic and cruise line Carnival led the S&P 500, all with double-digit gains, closely followed by United Airlines and American Airlines, which both added more than 9%.

Signs of a smoother transition to a more stable administration, along with vaccine news, is boosting investor optimism that there is a solid path to the pandemic being brought under control, and appropriate financial support provided to the economy in the meantime. At the bottom of the S&P 500 was electronics retailer Best Buy, which sank 7% after it declined to provide a Q4 earnings outlook – which covers the crucial holiday period – as it reported expectation-beating Q3 earnings.

Both the FTSE 100 and FTSE 250 rode the positive sentiment emanating from the US on Tuesday, to gain 1.6% and 1.1% respectively. The FTSE 100 was led by BP and Rolls Royce, which both added 8%, followed by miner Antofagasta and Barclays. Overall, more than a dozen names in the index posted a 5% plus day. One firm that found itself towards the back of the index was online grocery Ocado Group, which has been reacting somewhat inversely to positive vaccine news and signs of returning to normality. That is to be expected given the firm’s customer base grew as national lockdowns, induced by the pandemic, drove consumers to online grocery shopping. Ocado’s share price is up by close to 70% in 2020, but is down by 14.3% over the past three months. Travel firm Tui led the FTSE 250 on Tuesday with a near-16% gain, followed closely behind by catering company SSP and software firm Micro Focus.

Deere & Company: Agricultural machinery firm Deere has added more than 50% to its share price in 2020, including a 27% gain over the past three months. While the lifting of pandemic-induced lockdowns is positive for the stock, the economic damage done by Covid is likely to have put a dent in farmers’ willingness to invest in new equipment. That said, some Wall Street analysts raised their price forecasts for Deere stock over the summer, with long-term factors such as the firm’s efforts in precision agricultural technology coming into play. Investors will be watching for the firm to show signs it can back up its lofty valuation when it delivers its latest set of quarterly earnings on Wednesday. Wall Street analysts are expecting an earnings per share figure of $1.49, up from the $1.19 they had predicted for the quarter three months ago.

Aviva: London-listed insurer Aviva’s share price has rallied sharply over the past month, adding 26.2% and bringing its year-to-date loss to 19.3%. Pre-pandemic, the firm’s share price had been in decline for more than two years, and it still remains more than 50% off its high from the past five years (which came in 2018). The firm delivers quarterly earnings on Thursday, where a key point of focus will be whether the company makes changes to its dividend, which currently offers a near 3% yield. Aviva’s earnings report follows the news that the firm plans to sell its whole 80% stake in its Italian life insurance venture, as it looks to simplify its business.

UK spending review: Today, Chancellor Rishi Sunak will deliver a spending view that will detail budgets for various government departments. All eyes will be on the Office for Budget Responsibility’s assessment of the state of the economy and public finances, and if there will be any belt-tightening to come as a result. The OBR will also estimate the total cost of Covid-19 to public finances since the pandemic started, and Sunak will allocate money to address the cost of the virus in the 2021-22 financial year.

Bitcoin, the world’s largest cryptoasset came close to an all-time high yesterday, topping $19,000 for the first time since 2017. The cryptoasset breached $19,000 around midday and ploughed on to reach a high of $19,469 in the late afternoon. It has since fallen back however, trading just under $19,000 this morning at the time of writing. Bitcoin has now increased in value by 166% in the past 12 months.

This communication is for information and education purposes only and should not be taken as investment advice, a personal recommendation, or an offer of, or solicitation to buy or sell, any financial instruments. This material has been prepared without taking into account any particular recipient’s investment objectives or financial situation, and has not been prepared in accordance with the legal and regulatory requirements to promote independent research. Any references to past or future performance of a financial instrument, index or a packaged investment product are not, and should not be taken as, a reliable indicator of future results. eToro makes no representation and assumes no liability as to the accuracy or completeness of the content of this publication.